Lakers Takeaways From Play In Win 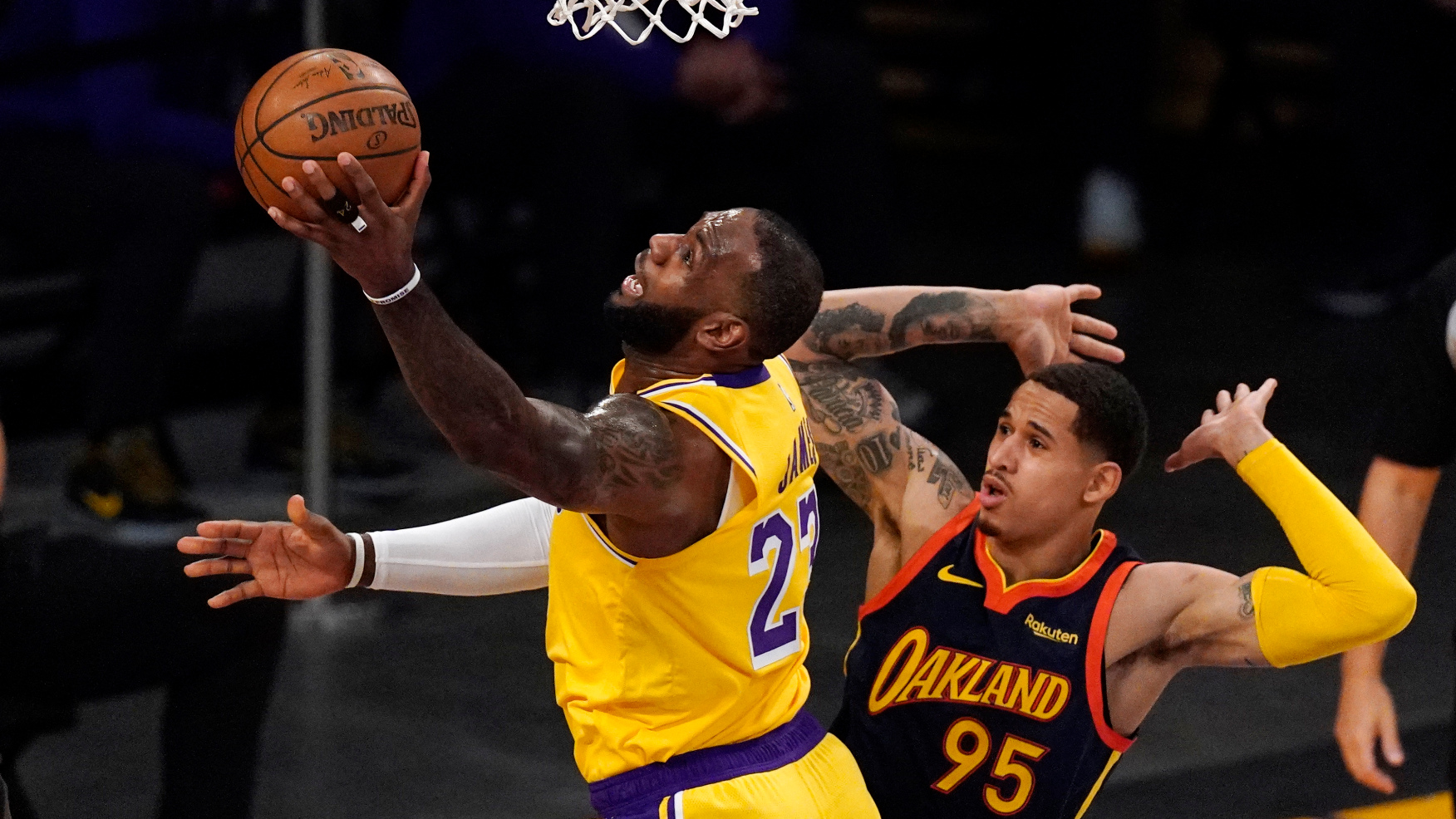 The Los Angeles Lakers dodged a bullet in Wednesday night matchup against the Golden State Warriors. Throughout the game, the Lakers looked as if they were forcing shots up or attempting to draw fouls. This is where Golden State flourished, especially in transition because every time LA didn’t get their way, the Warriors took the numbers advantage. Not to mention that Stephen Curry was on a mission, dropping 37 points while shooting 6 for 9 from three. In most games, when Curry gets hot like this Golden State usually comes out victorious. However, after settling in the third quarter and making adjustments, LA found their groove.

When the Lakers superstar duo of LeBron James and Anthony Davis couldn’t find a way to make a basket early in the game, it was the others that stepped up. Most notably Kentavious Caldwell-Pope, Alex Caruso and Wesley Matthews all left their mark in Wednesday nights game.

Caldwell-Pope’s job on the team is to space the floor, slash to the rim and defend the opposing teams best perimeter player. He checked off all the boxes in last night’s matchup, shooting and defending at high levels. It was in the early part of the game where KCP hit two three to help keep the Lakers afloat. It was at this time Golden State came guns blazing, knocking down shots from all over the floor. Not to mention that KCP played a key role in forcing the ball out of Curry’s hand early on. KCP ended the game with 10 points, knocking two three and three steals. Once again, KCP is showing how much of a threat he is for the Lakers coming up big in big time moments.

If Caruso hasn’t proved to the masses that he belongs in the league, he surely did it once again last night. Regarded as the Lakes secret weapon, Caruso seamlessly does it all. Not to the extent of what LeBron does, Caruso gets down and dirty for LA. Last night was no exception as he caused havoc for Curry when matched up on him. Constantly following Curry, shadowing him or trapping, Caruso made Curry work for everything. In addition he was the Lakers leading scorer heading into halftime. Since joining the Lakers in 2017, Caruso has earned everything he’s received in the league. Consistently playing with a chip on his shoulder, Caruso ended the night with 14 points, hitting two three with three steals and a block. The Bald Eagle continues to prove his worth, showing why he deserves to be on the floor late in game.

Although Wesley Matthews’ hasn’t earned himself consistent minutes from Frank Vogel, he continues to play good basketball when he sees the floor. Just as any vet, Matthews does not complain, instead he goes out and gets the job done. Last night play-in game was no different as Wesley checked into the game in the third quarter and helped spark a comeback. Once he hit a corner three mid quarter to cut the deficit, that is when the momentum changed. Equally as important, Matthews also took a charge, creating another possession for the Lakers. Although Matthews did not fill the stat sheet, it was the little things such as effort on the defensive end and floor spacing that helped the Lakers come out on top. With that being said, Matthews has been big for LA during the six game winning streak, hopefully he sees more time on court come playoff time.

Moving Drummond To the Bench

In the laments terms, Drummond hasn’t been what the Lakers expected since joining the team. When the idea of brining Drummond came about, there was excitement all around. However, now that we’ve seen how the experiment has done, it doesn’t look all that nice. For the most part it isn’t Drummond’s fault, he just doesn’t fit well next to Anthony Davis. Drummond for the most part is a paint player who looks to pick up the garbage and gets down low. Unfortunately this isn’t efficient for Davis as Drummond more times than not clogs up the paint. This isn’t just a problem for Davis, it’s also a problem for James as well. James who is notoriously known for his driving game, can’t find a way to operate when the lane is clogged up by Drummond and the other teams big.

There are many ways that Vogel can go to fixing this problem. Scenario one is to move Davis to the center and bring in Morris at the four for perimeter spacing. Scenario two is to reinsert Marc Gasol into the starting line up who can shoot space the floor as well as facilitate. The only problem with this is the lack of speed on the floor. Scenario three allowing Drummond take command of the bench unit as the teams’ back up center. However, the only problem would be finding minutes for Montrezl Harrell whose bread and butter is also in the paint.

The Best Offense is Defense

The number one rated defense came to play when it mattered most. Starting out sluggish, the Golden State Warriors drained 10 three in the first half. What the surprising thing is that Curry only made three of the 10 three pointers. It was the Kent Bazemore’s, Andrew Wiggins and Juan Tuscano-Anderson’s of the world that were hurting the Lakers. But once the that third quarter came around, everything changed.

Instead of sulking and imploding, Los Angeles came together and began to play Lakers basketball. What this means is playing hard nose defense and running in transition. This is where the Lakers bolster on offense, when they get stop after stop on defense. This was in large part from the efforts of both Alex Caruso and Kentavious Caldwell-Pope who got the job done on the perimeter. Not to mention that Anthony Davis came alive as well intercepting passes in the lane or blocking shots in the paint. The Lakers defense in the end forced 20 turnovers to which they scored 18 points off of. In addition the Lakers also had 15 steals and 7 blocks to go with the win.

Head Coach Frank Vogel is widely known as a defensive coach guru and this roster lacks nothing of that. Where they miss assignments, others are there to pick up the slack. What makes the Lakers such an intimidating matchup is the fact that they have the size advantage against almost every team. Should Los Angeles use this to their advantage and force teams to take difficult perimeter shots as well as keeping them off the boards, the Lakers have a chance at making another deep playoff push.

Nets Insider Podcast: Episode #1
The Man to Man Podcast Episode XXV: Football is Over, We’re On To Jai Alai