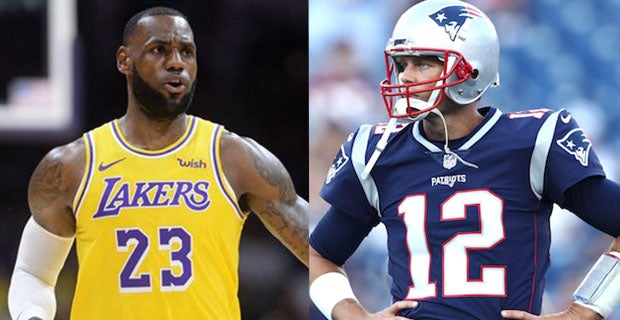 There is a popular belief that is ingrained in the culture of sports. That belief is that basketball is a young man’s game. This holds true for all sports that involves the athlete to rely on athletic ability to perform. There are a few athletes that are defying this belief such as 42-year old Tom Brady, who could be considered the greatest quarterback of all time. For anyone who has been living under a rock for the past two decades, Brady has been dominating the NFL since 2001. Between countless broken records and six Super Bowl wins out of nine appearances, Brady shows no signs of slowing down. Another anomaly that throws a wrench into father time’s plan is NBA legend Vince Carter, 42. It seems as though age 42 is the magic number, but there is one athlete the whole world is looking at to see if he’ll be the next one to test father time, and it is none other than Los Angeles Lakers forward LeBron James.

LeBron, at age 34,  is currently in his 17th season in the NBA and is playing inspired basketball to start the 2019-20 NBA season. He is averaging 25.2 points, 7.6 rebounds, and 10.8 assists per game (1st in NBA) with a PER of 27.25 (7th in NBA). James currently has a total of five triple-doubles this season and recently became the first person in NBA history to have a triple-double against every team. He is putting in his early bid for MVP with his performance so far this season, he is a big reason why the Los Angeles Lakers have the best record in the NBA (14-2). Clearly the three-time MVP and three-time champion is upset about missing the playoffs last season and is out to prove the world that he is still one of the best basketball players in the world.

These two greats made some noise heard amongst most sports fans by exchanging some playful banter on Twitter a few weeks ago. The exchange began when James was quoted as saying that him and Brady are one in the same, and that they will both play until they can no longer walk any more.

Brady and James’ exchange on Twitter sparked the conversation of how long will James’ career will be.  Will he be the Brady of the NBA and play until he is 50 years old? Some James fans believe that he will play until he is able to play against or with his son LeBron “Bronny” James Jr. Bronny is currently a freshman phenom basketball player at Sierra Canyon School in Chatsworth, Los Angeles. He is quickly finding his way into fans’ hearts and is the apple of college programs’ eyes due to his already massive exposure in the media. Bronny is on SportsCenter as much as his old man mostly due to his highlights on the court, but also because his father is “King” James.

The question is: Can James Sr. last the five years it would take Bronny to make it to the NBA? By the time Bronnie would be a rookie in the NBA, James Sr. would be in his 22nd NBA season. The main point of reference that fans will point to that would suggest James could achieve this feat is Brady. In his 20th season in the NFL, Brady has thrown for 2,536 yards, 14 touchdowns, and five interceptions. His team is in a good position to make another title run and no one should bet against Brady and Bill Belichick. If Brady can play at such an old age than it should be plausible that James can too. But this comparison is weak at best. Basketball and football are fundamentally different sports so the wear and tear on the respective sports athletes bodies are different. Usually career longevity would be given to basketball players but that is not the case in this situation. The main reason for this is that Brady is a quarterback. He is protected by one of the better offensive lines in football, also his non-running playstyle paired with the system of the New England Patriots (quick passes and running game centric) means that Brady doesn’t take the amount of hits as an NFL player usually does.

James, on the other hand, is not protected from the explosive up and down running flow of the game of basketball. Quick twitch movements, jumping, and landing for 82 games plus playoff times five extra years will take a tremendous toll on James’ legs. Because of the way James takes care of his body it is plausible that he can last another five years with ease. But will he still be playing at a high level like he is now? Vince Carter is currently in his 22nd year in the NBA and he is a shell of his former self. Would you rather see James as a role player playing against his son or see him retire in his glory?  The reality is father time is undefeated.

Dallas Mavericks Serve Notice (and Dinner!)
Social Media: A Blessing and A Curse In The Sports World