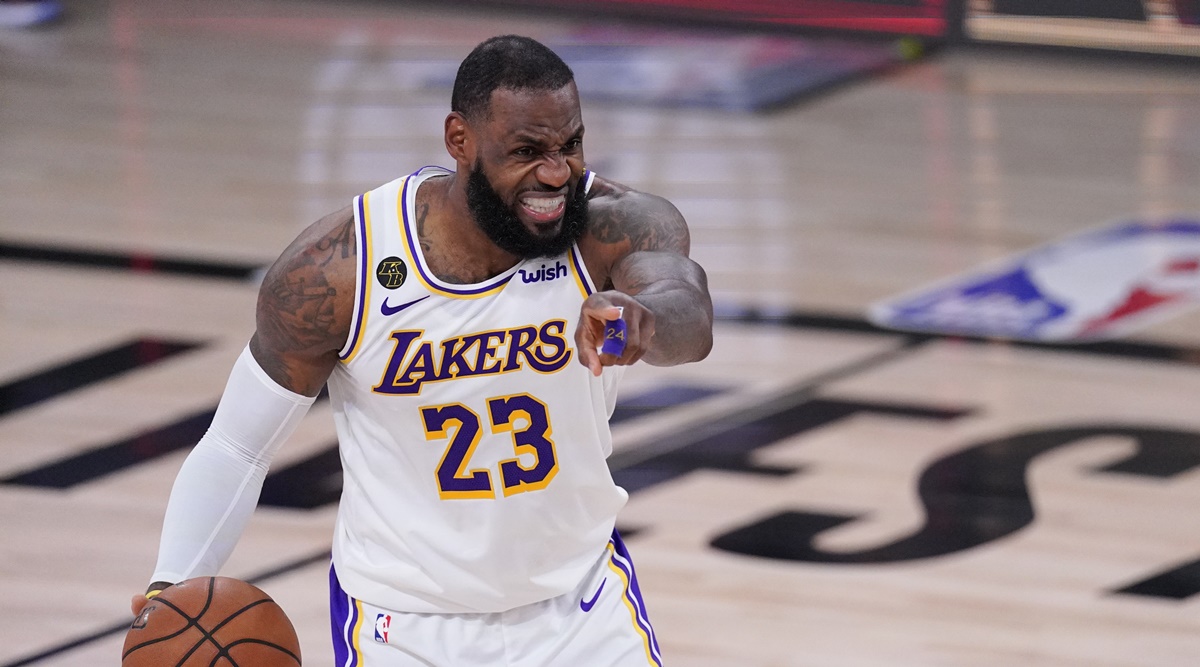 As the Los Angeles Lakers forge ahead in their quest to win yet another title, LeBron James became the all time winningest player in NBA playoff history with win No. 162. James was fantastic in the Game 3 win against the Houston Rockets with a stat line that read 36 points, seven rebounds, five assists and four blocks. A typical all-around performance by The King. The game before that, he had 28 points paired with 11 rebounds, nine assists and four steals. These numbers are fairly similar to his career stats, and are eerily similar to a Hall of Famer…but maybe not the one you think.

LeBron is almost always brought up these days when Michael Jordan is mentioned as the GOAT. Twitter is set ablaze constantly with tweets and counter tweets as to which one is the best, an argument with seemingly no end in sight. Thing is, like the LeBron vs. Kobe Bryant debate, it makes little sense to compare two players who are so incredibly different. MJ vs Kobe is obvious, same height, almost same weight, same position, similar mentality, close in stats etc. Kobe is the closest at that position we’ve ever seen to MJ. Kobe admittedly stole all Michael’s moves when Jordan called him out on it, all in fun of course, MJ and Kobe were very close.

LeBron is seen by many as the greatest player of his generation as Michael was to the generation he played in,  but that is pretty much all they have in common if you really look at it. Micheal, a two guard tasked with scoring the basketball, helping out rebounding the ball and shutting down the other team’s best guard. During his time, Jordan was the unchallenged alpha of the entire NBA. He continued the legacy of the NBA into the 90’s established by Larry Bird and Magic Johnson as the co-faces of the NBA during the 80’s. Jordan is also mostly responsible for the NBA becoming the global game it is these days. Jordan was the first NBA player known around the world commercially, with Air Jordan still one of the most popular brands on the planet.

Jordan was/is notoriously competitive. During his playing days, Jordan hated losing, and I mean really hated losing at anything, cards, quarters you name it. Jordan would rather die than give in to an opponent. This is the same mind-set Bird, Magic and Kobe had as well, they would keep going at you until they finally beat you. The very last thing any of these great players would do is after a few years of trying and failing to topple the opposition, go ahead and join them. In fact none of the greats from the 80’s or 90’s would even dream of doing such a thing except a couple that stand out, Charles Barkley and Scottie Pippen.

When the Chicago Bulls dynasty finally ran out of gas, Pippen looked to get paid after years of being underpaid in Chicago. Pippen knew that if he was to win a title without Michael, he’d need other great players to do it with and Chicago had none at that moment in time. That led Scottie to join forces with Barkley and fellow HOF’er Hakeem Olajuwon in Houston. The chemistry of the team was terrible, however, and just one season in Pippen asked for a trade. The Rockets abided his request and traded him to the Portland Trail Blazers where he joined young stars Rasheed Wallace and Steve Smith. The Trail Blazers were seen along with the Lakers as the up and coming team out west.

King James, after years of trying to get the hapless Cleveland Cavaliers to the promised land, finally realized he would have to join forces with others as well to achieve this goal. The “decision” was televised on ESPN on July 8, 2010 where James proclaimed he’d take his talents to South Beach and join the Miami HEAT. LeBron sought to form a super team with Dwyane Wade and Chris Bosh to win not five, not six, not seven titles and rule the NBA for years to come.

The HEAT ended up winning just two and LeBron saw the team was fading quicker than even he could’ve expected so he returned to Cleveland to pair up with budding superstar Kyrie Irving with Kevin Love joining not long after. The Cavs were finally able to break through in 2016 on the biggest made basket in Cavs history by none other than…Kyrie Irving. Then after losing to the Golden State Warriors and Kyrie asking for a trade, James joined the Los Angeles Lakers to later combine forces with superstar Anthony Davis.

Pippen’s stops in Houston and Portland yielded zero NBA titles, not even a trip to the Finals. After all the championship chasing and team hopping, Pippen ended up back where he started, in Chicago, where he would retire in 2004. James, to his credit, has won at least a title and had multiple finals appearances in two of his three stops so far.

The team hopping is not the only thing James and Pippen have in common, not in the least. Both players are small forwards with James also playing some power forward. James is the bigger of the two by an inch and about 30-35 pounds, but both play the facilitator role as the point forward for their respective teams. Both players are also asked to play a more all around game for team success.

During Pippen’s 12 years in Chicago, he averaged just under 18 points, seven assists and six rebounds, compared to James’ career stats of just over 27 points, seven rebounds and seven assists. LeBron is obviously the better scorer, but Pippen is definitely the better defensive player of the two with eight All Defensive First Team and two Second Team selections to LeBron’s five and one, respectively.

James, like Pippen, doesn’t really have the reputation of being the go-to guy at the end of a game. To be fair, James is second all time in game winning shots only to Kobe, but as far as dagger shots to put away a finals win James is not seen as “that guy.” Dwyane Wade handled those shots in LeBron’s first title run to victory, Ray Allen hit the signature shot against the San Antonio Spurs in James’ second title win, and we all know what Kyrie did to topple the 73 win Warriors.

Michael on the other hand, had countless moments where he absolutely stole the show. The shot over Craig Ehlo against the Cavs in the deciding Game 5 of the 1988/89 NBA first round is one everyone has either seen or remembers it from back in the day. The game winner against the Utah Jazz to seal title number six is another, where were you when that happened moment in NBA lore.

One underrated moment was the 63-point performance in 1986 against the eventual champion Boston Celtics. Obviously the game itself is well known, but Jordan had to hit two intense foul shots with no time left to send the game to overtime. We won’t even discuss James’s failings as a free throw shooter, that just wouldn’t be fair. When you absolutely need your best player to be at his best to win a crucial game, Jordan is the best at his position, and probably the entire NBA, to ever do it.

Michael also never had anywhere close to the number of bad games in the NBA Finals that LeBron has had. The series that most look to for emphasis of this was the 2011 Finals loss to the Dallas Mavericks. In three of those games, LeBron came up especially small playing with a passivity not seen from many NBA superstars. Game 4 was the worst statistically, as James finished with just eight points, nine assists and seven rebounds. The worst game overall had to be the Game 6 loss,with James taking only 15 shots and hitting just seven with six turnovers in the do-or-die game.

The most recent clunker came in 2018 against the Warriors in the NBA Finals Game 4 loss. James finished with 23 points, but made only one field goal in the second half and had noticeably given up long before the final horn. Can you imagine Jordan going out like that? Definitely not. Pippen however does have a moment where he actually did give up completely during a playoff game with the Bulls.

On May 13, 1994, Game 3 of the Eastern Conference semifinals against the New York Knicks, Pippen was asked to play the decoy to free up Toni Kukoc for the game-winner. Pippen thought he and not Kukoc should be taking the last shot. This was the year Jordan had retired to play baseball and Pippen was seen as the new team leader for that season. So because of that, he had a tantrum on the bench and refused to enter the game. The play drawn up by coach Phil Jackson still worked and Kukoc hit the winner to bring the Bulls back into the series with New York. Pippen has still never really lived it down, as highlighted in ESPN’s “The Last Dance” documentary on the Bulls.

The fact is that LeBron can wear number 23 all he wants, he has not been, nor will ever be comparable to Michael Jordan. That is not a terrible thing either, nobody in the history of the game can be truly compared to MJ, not even Kobe. LeBron is a phenomenal player, possibly the most purely talented player in NBA history. LeBron is like a cross between Magic and MJ, not as good as either at what they did best, but really good at both scoring and distributing the basketball. LeBron is more like Pippen when it counts however.

Pippen is also known for the famous “migraine” game in Game 7 against the Pistons the year before the Bulls finally beat them. The pressure of the moment got to Scottie much like the pressure got to LeBron in his first finals appearance with the HEAT. Pippen eventually got past his mental shortcomings to become one of the NBA’s greatest players, as LeBron has also. Here’s the thing, Jordan came into the NBA like a storm ready to take over and never wilted under the pressure, especially in the finals.

Jordan also never joined forces with former foes to try and grab another title or two. James, like Pippen, has done this on multiple occasions. LeBron is an all-time great, there is no way a sane person could argue against that. Nonetheless, because of the championship chasing coupled with his penchant to come up short sometimes when it matters most, he will never eclipse Michael as the greatest, case closed.

The Blur is Back: What Leandro Barbosa Brings To The Warriors
The Most Attractive Coaching Job in the NBA