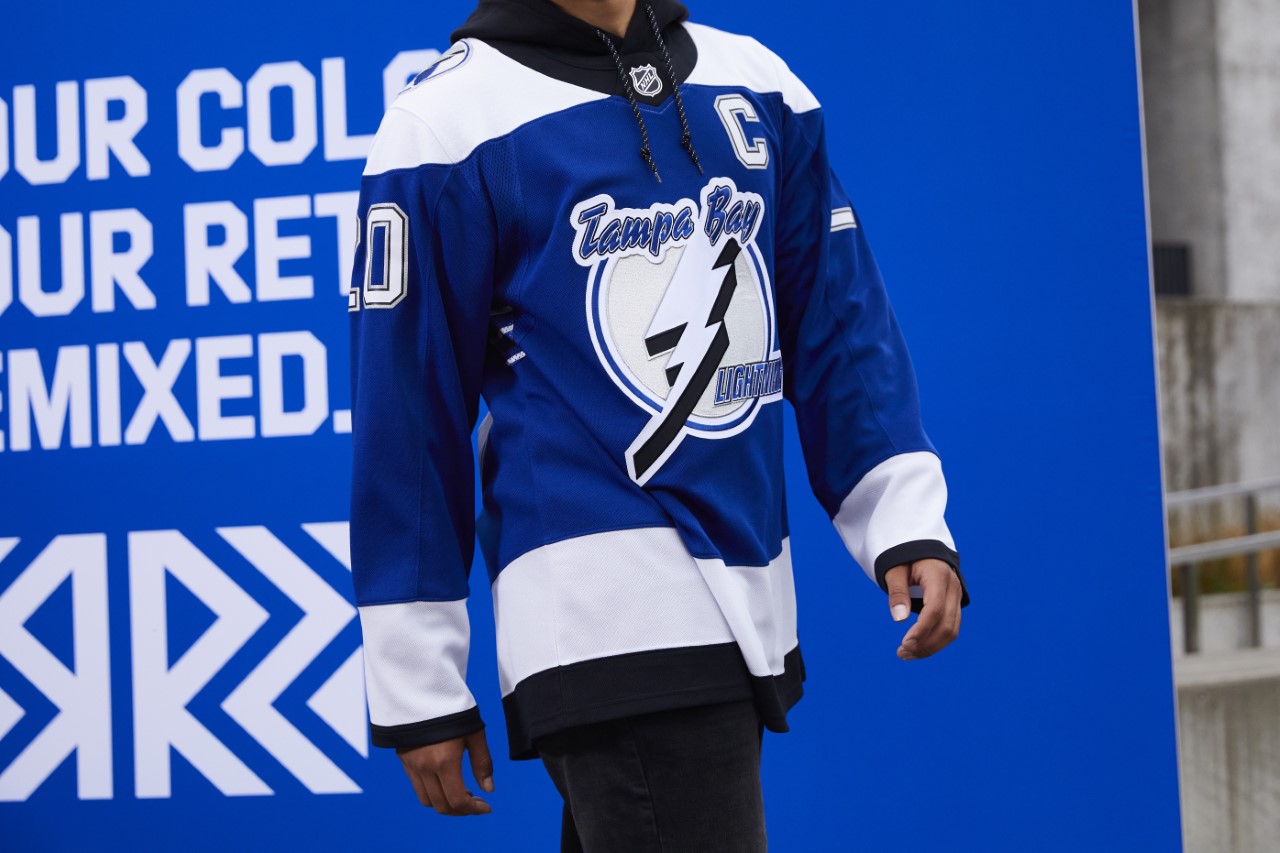 The Tampa Bay Lightning, along with the National Hockey League and adidas, today unveiled the Reverse Retro ADIZERO Authentic jersey to be worn across the League at select games next season. It marks the first time in NHL history that all 31 teams have participated in a League-wide alternate jersey program. adidas worked closely with the NHL and each team to design a Reverse Retro jersey representing unique and historical moments in each club’s history, while refreshing the color and design combination for an all-new presentation.

“Hockey fans love retro jerseys and Reverse Retro is a great opportunity for adidas to work closely with the NHL and all 31 teams to bring back a design from a meaningful point in team history with a unique twist,” said Dan Near, Senior Director at adidas Hockey. “Our goal from day one has been to work with the NHL and all of the teams to bring creativity, innovation, and energy to the sport with all that we do. What better way to do that than to bring together the nostalgia of historical moments in each team’s history with something new via designs that have never been seen before in the sport.”

Brian Jennings, NHL Chief Brand Officer and Senior Executive Vice President added, “NHL team jerseys have long carried deep historical significance for avid and casual hockey fans. Through the years, the design of each team jersey has evolved to balance history and authenticity with cultural touchpoints. The Reverse Retro program is a celebration of the hockey jersey’s confluence of nostalgia, style and broad appeal. As a brand, adidas sits at the epicenter of youth, sports and lifestyle and is the ideal partner for this exciting initiative.”

The adidas Reverse Retro program creates a new formula to showcase the passion of the fans. The overarching design theme during adidas’ two-year-long process was to mine each team’s jersey archive and team colors, remixing them to create something new and never seen before. With that in mind, adidas created uniquely distinct and desirable jerseys that incorporated inverted team colors.

The Lightning’s Reverse Retro jersey harkens back to the organization’s first Stanley Cup Championship in 2004.  Inspired by the team that featured Hockey Hall-of-Famers Martin St. Louis and Dave Andreychuk, as well as the likes of Brad Richards, Ruslan Fedotenko, Fredrik Modin and more, the system will feature the original Lightning logo with scripting, shoulder patches and the historic victory stripes while flipping the black color scheme to blue.

Each team will wear the adidas Reverse Retro ADIZERO Authentic jersey in multiple games during the 2020-21 NHL season with special head-to-head matchups featuring exciting and renewed rivalries – both old and new – the league will announce at a later date.

Tampa Bay’s adidas Reverse Retro ADIZERO Authentic Jersey is available for pre-order starting this afternoon at 3 p.m. through November 30 exclusively at Tampa Bay Sports locations at AMALIE Arena and International Plaza, as well as at TampaBaySports.com. Beginning December 1, the Lightning’s jersey, along with the rest of the NHL, will be available at adidas.com and NHLShop.com, with a wider availability at additional retailers starting on December 6.