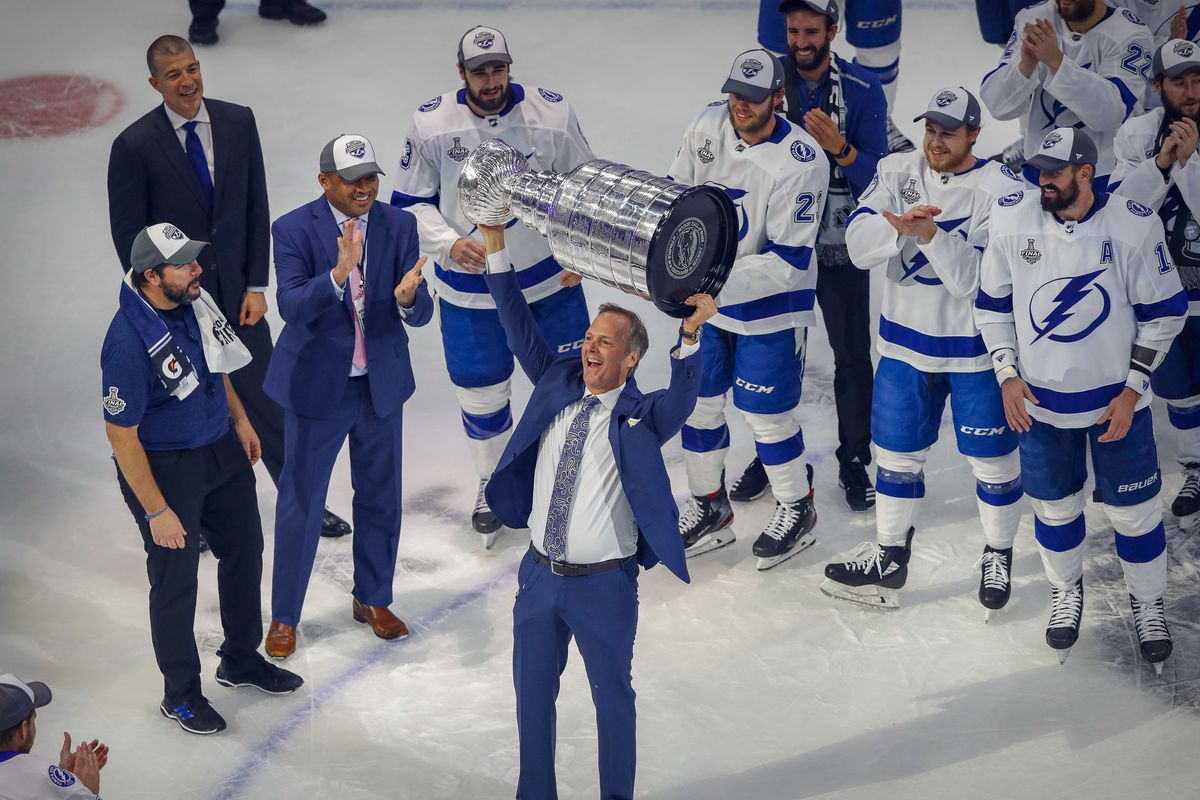 The road to recovery from last year’s first round playoff sweep is complete. It has been a long wait indeed for the hockey lovers down in Central Florida. Sixteen long years have passed since the last time the Tampa Bay Lightning hoisted the most historic trophy in North American sports. This wait ,however, was more about the last 511 days.

As stated by head coach Jon Cooper in the post game press conference, it was exactly that many since the Columbus Blue Jackets unceremoniously swept the Lightning out of last year’s playoffs. For the Lightning fans, players, staff and ownership, these past 511 days have certainly felt a heck of a lot longer than the previous 14 plus years.

In what is the understatement of the year, this was the most unusual Stanley Cup run in the history of the sport. Over two months straight of being away from family, friends (outside of teammates of course) and virtually the entire outside world, the Lightning kept it all together and conquered everything that was thrown at them. During this year’s playoff run, it became evident that no team, no circumstance, not even a global pandemic was going to stop them this time around.

Brayden Point, who had such an incredible playoffs from start to finish, got the team going on a rebound put back over Dallas Stars goalie Anton Khudobin. From there, like most of the series, the Lightning clamped down on the banged up Stars and never let up. The Stars had just eight total shots going into the third period and hardly any real chances on Lightning goalie Andrei Vasilevskiy.

Offseason pickup Blake Coleman added another goal in the second period to make it 2-0. With the way the Lightning were playing, it must’ve felt like 10-0 to the Stars who just couldn’t sustain any real attack in the Lightning zone. Game 5 heroes for the Stars, Corey Perry and Joe Pavelski, were held to zero points and just three shots on goal combined, all by Pavelski.

So it was up to the other veteran stalwarts Jamie Benn, Tyler Seguin and Alexander Radulov to come to the rescue but it was all for naught. The Lightning simply weren’t having any of it and the Stars looked like they could feel the inevitable just minutes after the opening face-off. Once the final few seconds ticked off, it clearly felt that the best team in the NHL had just won the Stanley Cup in convincing fashion.

The road to triumph for the Lightning was paved with every obstacle the NHL could muster. Last year’s Columbus Blue Jackets were first on the list. Yes the Lightning ultimately prevailed in five games, but two of those were in OT, one going five extra periods after the initial three were finished. Every game except the loan Blue Jackets victory was a one goal nail-biter that certainly tested the Lightning in every way possible. Then it was on to the President’s Trophy winning nemesis, the Boston Bruins.

The Bruins and the Lightning were the consensus best two teams in the Eastern Conference but because the Bruins lost their No. 1 seeded status in the play-in round, it meant the two would be squaring off in the second round. This Bruins team came in a bit depleted with starting goalie Tuukka Rask opting to sit out the bubble playoffs due to family health concerns. Nonetheless back-up Jaroslav Halak, had sparkling numbers all season and had played just a few games less than Rask, so not really a huge drop off there.

The Lightning again won in five, but like the first round series, two games went to OT with the fifth and final game going to double overtime. So to this point the Lightning had played the equivalent of almost three full extra games in OT alone.

Then came the upstart New York Islanders who pushed the Bolts to six games with two games going to OT. So to this point, of the 16 playoff games Tampa had played in, six went to extra frames with four of those going into multiple OT’s.

After all that came the Stars, who in a lot of ways, mirrored the Lightning. The Stars head coach Rick Bowness was an assistant under Cooper and it showed with Dallas employing a similar game-plan to the Lightning all season.

Like the Lightning, the Stars made shrewd offseason moves to improve the team’s depth and grit. Perry, Pavelski and Andrej Sekera played big roles during this year’s playoff run for the Stars. For Tampa, offseason veteran pickups Patrick Maroon, Kevin Shattenkirk and Zach Begosian did similar work for the Lightning. The Stars additions were actually even better with Pavelski finishing third on the team in playoff points, and Perry saving the Stars season in Game 5 with two goals including the game winner.

Also like the Lightning, the Stars had speed and skill up front with young talent mixing well with battle tested vets. Younger players Roope Hintz, Denis Gurlanov and Tyler Seguin paired well with Jamie Benn and Alexander Radulov to provide the Stars with a balanced attack all playoffs. Nonetheless, the Tampa trio of Point, Ondrej Palat and Nikita Kucherov were certainly more prolific. The Lightning attack was more top heavy, however, with the three along with Victor Hedman getting the bulk of the points.

To counter Tampa’s Hedman and budding star Mikhail Sergachev on the back end, the Stars also had great skill on the blue line. Miro Heiskanen led the team in points with 27 with fellow defenseman John Klingberg right behind him coming in second at 21. And let’s not forget about the goalies.

Both Russian and both red hot coming into the Finals. Yes Vasilevskiy came in the more proven of the two, but both were almost equally great at the right time, with Khudobin having something of a coming out party this year. Khudobin was pressed into action when starter Ben Bishop went down with an injury and he certainly made the most of it, keeping the Stars in almost every game throughout the playoffs.

Injuries did play a role in Dallas going down in six. Notably Hintz and Blake Comeau not being available after Game 5. Make no mistake though, the Lightning were the better team for most of the six games, especially on the power-play going 7-16 in the series. The lightning also dominated long stretches 5-on-5 with incredible offensive zone time, shot totals and more grade-A chances. The Stars hung tough and were a worthy foe, but simply no match for the talented and determined Bolts.

Now the Lightning have some interesting off season questions to answer for sure. Unrestricted free agents Shattenkirk, Maroon and Luke Schenn were vital to this year’s Cup victory, but all three are on the wrong side of thirty.

Then you have younger players Anthony Cirelli, Erik Cernak and Sergachev all as restricted free agents who will obviously want long term deals. Tampa GM Julien BrisBois has done a masterful job adding to the foundation laid by the previous GM Steve Yzerman but he’ll have his work cut out for him during the abbreviated off season.

Whoever BrisBois decides to keep, you can take this to the bank. The Lightning are not going anywhere anytime soon. The facts are that the core of this roster is the best in the NHL. Currently the team boasts one of the best young talents in the game in Point. The team also has arguably the best defenseman and goalie in the game in Hedman and Vasilevskiy. Steven Stamkos is still the best pure goal scorer in the NHL.

Most importantly, you have last season’s MVP and leading scorer Nikita Kucherov, who led the NHL playoffs this season in scoring with 34 points. You throw in possibly the best coach/GM combo in Cooper and BrisBois and you have the makings of an NHL dynasty on your hands. The Eastern Conference is deep and competitive no doubt with the likes of Pittsburgh, Boston, Washington and Philadelphia. Up and comers NY Islanders and Carolina Hurricanes will also certainly be a problem.

Here’s the thing, none of those teams has the talent or the depth that the Lightning have. To go along with that little fact, except Carolina and NY, most of the star players on those teams are all well past 30. Tampa has Stamkos who just turned 30, but the rest of the core is still under the wire.

If this team stays healthy, and obviously in hockey that’s a big if, this team could be competing for the Cup for the next three or four years, at least. As long as Tampa keeps making the right moves to bolster the roster when needed, expect at least a few more trips to the Finals and maybe even another Cup or two when it’s all said and done.