Looking Back with The JYD: Jerome Williams 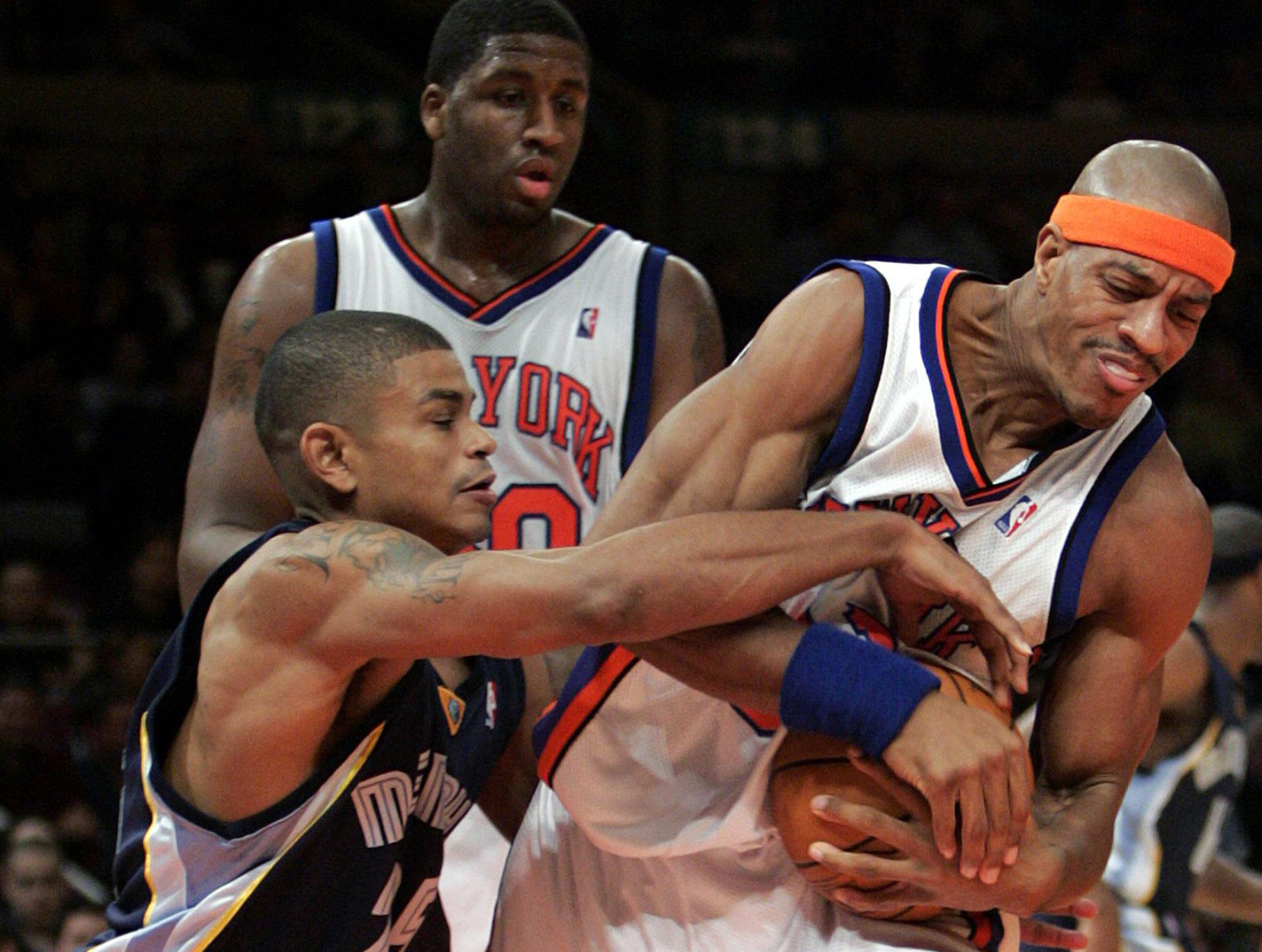 Throughout his childhood, Jerome Williams often found himself playing basketball on a narrow slab of concrete near his home in Germantown, Maryland. Whether he was practicing his shot or competing hard against his older brother and father, Jerome had one thing on his mind: don’t let the ball hit the grass.

“I actually developed the skill of rebounding playing on a small court. It was probably about 25 feet long but only 15 feet wide. When I was out there shooting or working on my game, I never wanted the ball to go out of bounds. The point was when I was shooting, never let the ball hit the grass. So I chased down all the rebounds.” Over the span of his 9-year NBA career, the man who would come to be known as “The Junkyard Dog” channeled his skill in becoming one of the best pure rebounders and role players in the game, averaging 10.3 boards per 36 minutes. The path he took to get to the NBA and beyond was as unique as the way the way he learned his craft.

Despite being a solid player in high school, Williams was only 6’2” and was not recruited to play major college basketball. Upon graduation, his parents gave him two options: pay his way through college and live at home, or move out. Always conscious of the importance of education, Williams chose to attend nearby Montgomery College.

“I went and got a job pumping gas at the local Chevron station and paid my own tuition. For the first two years, I played on a college team that didn’t even require a tryout, you showed up and you were on it.” By the time he played his first game he had grown to 6’5” and was able to play above the rim for the first time in his life. With newfound ability, he took advantage of being in the hotbed of college basketball that is Washington, D.C. and began playing against the area’s best players.

“That’s where I got to play against a lot of high-level competition playing against Georgetown guys (Don Reed, Othella Harrington), Maryland guys (Exree Hip) and Howard guys.” Over time, he showed that he could hold his own against some of the most talented players in the country, and one of the nation’s top programs took notice.

“Georgetown recruited me off the playground. In Washington, D.C., basketball news travels fast. We didn’t have internet or twitter back then, but the people who knew, they knew. That’s where Georgetown found me and saw that I had potential to play at the Division 1 level, and they offered me a scholarship based on my grades.”

Williams always felt a strong connection to Georgetown; he was born at the University’s hospital during the same year the school hired the legendary John Thompson as the men’s head basketball coach. For a player who wasn’t certain the NBA was in his future, the academic focus the school provided was key. On the court, he got to play alongside Allen Iverson and learn from some of the school’s greatest players.

“Some of my fondest memories are playing against guys like Patrick Ewing, Alonzo Mourning, and Dikembe Mutombo during the summer time, who would work out with us before their preseason camps. We got to see how hard they had to work to be an NBA player. During the school year they made sure we got more [work] in the classroom than on the court. We really liked those summer games to see how we were coming along.”

By the end of his senior year, the now 6’9” forward had averaged 10 points on 59% shooting and 8.8 rebounds a game. Despite being a role player in college, he was drafted 26th overall by the Detroit Pistons in the 1996 NBA Draft. He knew that in order to stick in the league, he had to become a game changer in the areas he could: rebounding, defense and hustle. Instead of focusing on his offensive game, he looked to Dennis Rodman, Charles Oakley and Horace Grant as his models of a successful career. As his vision became a reality, he was no longer just Jerome Williams, he was the Junkyard Dog.

Growing up, Jerome Williams loved wrestling. When the WWF (now WWE) came to town, he would make the trip with his father to see the events live. “I used to always admire guys like Hulk Hogan, the Junkyard Dog, and I loved how The Rock and “Macho Man” Randy Savage always referenced themselves.” When his Pistons teammates Rick Mahorn and Grant Long started calling him the Junkyard Dog after the energetic and tough wrestler he admired, Williams immediately gravitated to his new moniker. “I could relate to the Dog Pound, being from Georgetown with the bulldog. It all lined up.”

Soon enough, whenever he would check into the game, fans would bark down to the court to show their support. The crowds would go crazy for rivalries seemingly fit for the comic books at the corner store: the Junkyard Dog versus the Big Dog (Milwaukee Bucks forward Glenn Robinson) or The Mailman (Utah Jazz power forward Karl Malone). Fans served as a reminder that they were paying money not only to see the most talented superstar or the most dominant team. Fans also want to see characters. They want their own superheroes.

“There are so many facets to the game. You have guys who are great shooters and great scorers. But you got to have other people in there who can do things, too. And if you can show them [being a character] is a skill that not everyone has, the fans gravitate towards that.” As his fan base—known as The Dog Pound—began to grow, Williams realized he needed to give back.

“My parents were always telling me, ‘It’s not what you do with the basketball, it’s what you bring to the table. You can take the elevator up in life, but it can also come back down.’” Feeling the pressure to represent The Dog Pound in the community, Williams created The JYD Project in 1997 with the help of his brother. At the time, Detroit’s schools had an alarming 33% drop out rate. The idea was simple: motivate kids to stay in school through any means possible.

The upside of playing limited minutes meant that he could spend more time visiting schools with his brother (in full Junkyard Dog costume), speaking to kids about his own journey through education, giving out tickets to games, t-shirts and autographs. In short, if it could make a child happy and inspire them to stay in school, it was done. “I could have been a statistic. Because I stayed in school, I gave myself an opportunity. I think all kids are at risk, whether you’re high income or low income. All kids go through the same stuff. Everyone needs the extra motivation to believe in their own dreams.”

After being traded to Toronto, Williams wasn’t sure if his message would still resonate. “When I got traded I thought I was losing my fan base, and then I’d show up and I was a fan favorite there too. No matter where I went—New York, Chicago, Detroit, Toronto—the Dog Pound kept popping up all over the country. It’s a great feeling knowing that you do the right things and people appreciate what you bring to the table.”

The JYD Project took off in Toronto, where the Raptors have the attention of the entire country, and The Project has been a mainstay in every city Williams has been to, expanding its reach at every new destination. Currently, the JYD Project has begun working with Columbia University to teach high school students financial literacy in addition to continuing its motivational student pep rallies. The NBA recognized Williams by naming him the second-ever NBA Community Ambassador in 2006.

“One of my crowning achievements was being named the Community Ambassador. For me to get that title and serve for a year in community service was an impeccable experience. I was involved with every community initiative for All-Star Weekend, Habitat for Humanity after Hurricane Katrina, Feed the Children, wheelchair and hearing aid charities and Basketball Without Borders in Africa and China.”

Williams credits global NBA community initiatives with spreading the game he loves. In China and South America, what started as community projects has grown into an appreciation for basketball. “People always got to see us on tv; then they began to understand the personal side of how we were helping their communities. Now they could meet with us and play with us on their own turf.”

The most recent destination for Williams is Nevada. When his wife suggested moving west to Nevada, where the dropout rate was 57%, he saw it as a sign from above. In addition to helping the CCFC school board keep kids in school, he is also working as an assistant basketball coach and teacher at Findlay Prep in Las Vegas. Unlike many of today’s powerhouse high school athletics programs, Findlay Prep was conceived specifically to give young student-athletes a great education. The goal is to transform lives through education. Williams’ international experience is important, as the team sports a diverse roster featuring students from 7 different countries including Lithuania, Italy, England and Canada.

When he settled into the area, Coach Michael Peck invited Williams to work out with the team, and The Junkyard Dog’s relationship with the school evolved from there. “Coach Peck does a fantastic job of teaching the players the right way to play together as a team, offensively and defensively. I get to teach a class, give these guys insight into college life, pro life, life after playing, understanding their brands, teaching them to be young men. It’s about living the right way, a Godly way. Out here they don’t have their parents, so we become their parents.”

His message has obviously gotten across to his players. Last weekend, Findlay Prep won the ESPNHS National High School Invitational, the team’s third such title in four years, and finished the season a whopping 32-1. At the same time, JYD continues learning himself, soaking in as much life experience as he can from his mentors Bobby Dandrich, Magic Johnson and George Gervin. “I’m still learning from the NBA legends. They keep on top of me for what I need to be doing. They’re still in my corner.” Even with so much accomplished, there is no stopping the Junkyard Dog. He may no longer be chasing a spherical orange ball, but he sure won’t let any opportunities hit the grass.

Kenny Florian: A True Student of the Game
Another Battle for George Karl