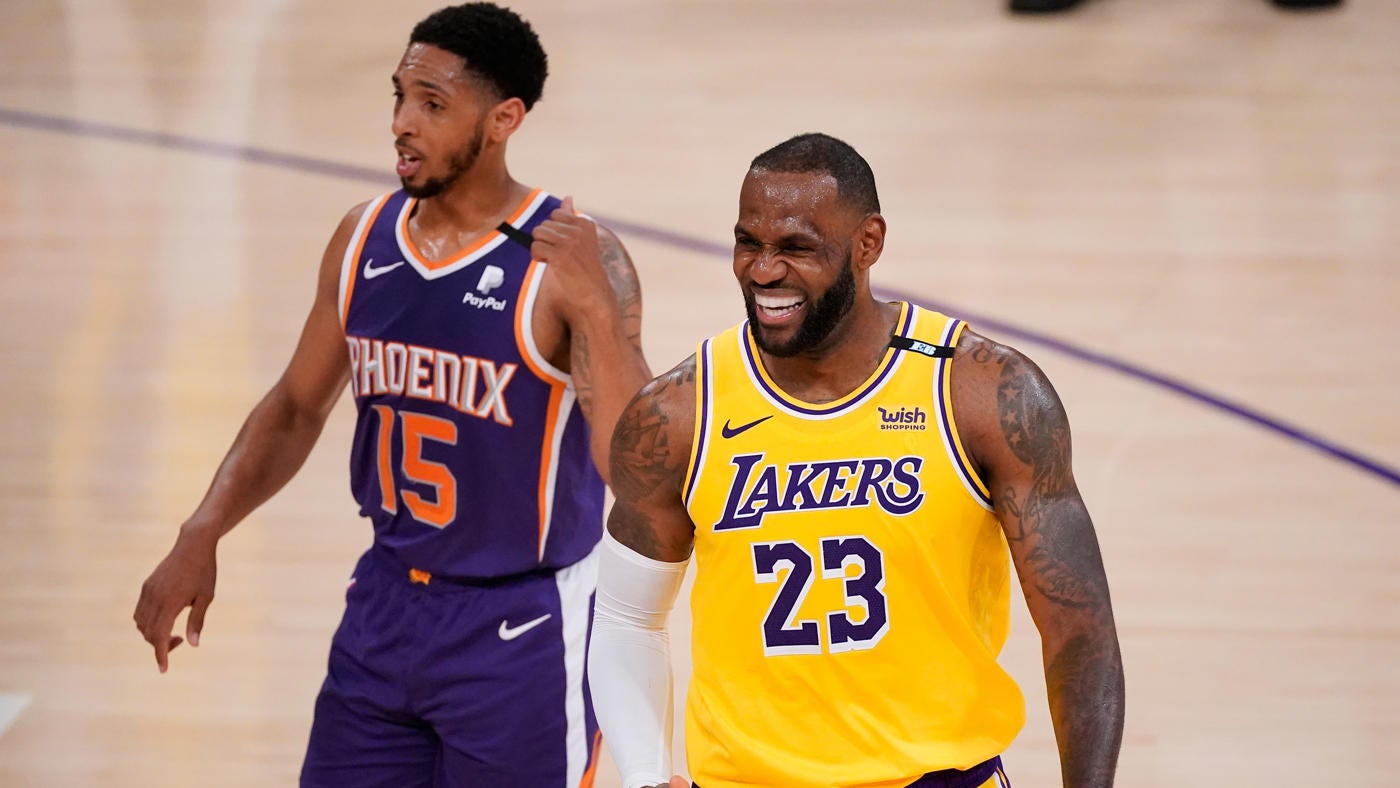 The last time the Los Angeles Lakers held a home playoff game ago came in 2013 against the San Antonio Spurs. Clock back one more year and it was the last home playoff win in 2012. The star studded duo of Kobe Bryant and Pau Gasol were still running the show in Tinseltown. Fast forward to 2021, a new star duo is running the show and caught LA’s first home playoff since then. LeBron James and Anthony Davis handled The Phoenix Thursday 109-95 in a dominant performance by the two.

LeBron James and Anthony Davis had performances that Los Angeles needed in order to leave a statement. What seemed like a quiet night for James with a stat line of 21 points, nine assists, and six boards was the exact opposite. James took over in key moments, most specifically in the beginning of third quarter after what looked as if Anthony Davis hurt himself after a chase down block on Devin Booker’s lay up. This is the exact time when James showed why he’s the greatest driver of the basketball in NBA history. In multiple instances James put his head down and used his strength to bully his way to the basket. It came to a point where Jae Crowder switched onto James but made no difference. LeBron is now at the point where instead of out muscling his opponents, he out-thinks them.

Anthony Davis, the other half of the superstar duo, had an excellent performance. After struggling in Game One and hearing it from the media, he owned up to it and has come out aggressive. In both Game Two and Three, his entire mindset has changed. He’s no longer continually settling for jump shots, now he is making cuts to the rim and posting up his defender. In the past two games, Davis has two 34 point 10+ rebound games. However the stat that best displays his added sense of aggression is his free throw attempts. In these past two games, Davis has gone for 21 and 17 attempts in Game Two and Three, respectively.. This shows that Davis is making a conscious effort to establish himself down low and take contact. Should Los Angeles repeat, this is the type of performance they need from Davis.

Schröder Is the Third Star

Since Anthony Davis joined LeBron James in Los Angeles, many wondered who the third star would be. Kyle Kuzma was the evident choice of many. However, Kuzma’s major flaw is his lack of consistency for the Lakers. Insert Dennis Schröder from an offseason trade and Los Angeles found their answer. For the better part of the year, Schröder has proven himself as one of the teams’ most impactful players on the roster, not to mention that he does it on both ends of the floor as well as gives his body up for extra possessions.

In game one against the Suns, Schröder struggled quite a bit trying to find his offense and get into a rhythm. As it was for the rest of the team,, this was more a feel it performance to see how Phoenix would play him. In the past two matchups though, Dennis is living up to the nickname James gave him, Dennis the Menace. Schröder has hit the 20 point mark in back-to-back games for Los Angeles. His aggression on the floor has helped LA mightily, especially when he uses his speed to get past a defender for a lay up. In addition his defense seems to be taking a toll on Devin Booker, as he has struggled to be efficient the past two games, shooting 36.1% from the field and 14.3% from three. Should Schröder continue his play, he will earn that massive contract he desires.

Although it’s always a plus to have two superstars on a team, it’s the others that win championships. As of late the Lakers supporting cast has struggled for the better part of the series. This is especially obvious with the Lakers lack of perimeter shooting. LeBron already chewed out Kentavious Caldwell-Pope after passing up a routine three point shot he’d usually take. KCP who shot 41% from the three this season is shooting an abysmal .07% from three in the first round. However, the only way to get out of a slump is to continue shooting to which James encouraged him to do.

The Lakers supporting cast seem to have a confidence issue as they continue to play passive. This was noticeable with Kyle Kuzma in Games One and Two who shot a total of six times in both games. Although he did come out more aggressive in Game Three his shot is having trouble falling. With Kuzma’s shot having a difficult time to settle, he did the other things in Game Three such as rebounding, defending and play making to make an impact. The core example of this came in the second half after missing a layup, Kuzma followed his miss an extra two more times in a put back attempt before a Sun’s player hit it out of bounds.

Both Kuzma and Caldwell-Pope are due for a big performance sooner rather than later in this playoff matchup. However, with their recent struggles they must continue to do the little things to help make an impact in the game other than shooting.

The two players who had a huge impact in Game Three’s win over James, Davis or Schröder were Wesley Matthews and Andre Drummond. Both haven’t seen the floor for long stretches, but made the most of their opportunities when it mattered most.

For Drummond it was in the beginning of the Game Three where he made his presence felt. He played physical with the young star DeAndre Ayton, doing what he can to make things difficult for him on the offensive end. However, it was Drummond who terrorized Ayton early on. After receiving a pass in the post, Drummond took Ayton baseline spinning into an emphatic jam. Drummond was a monster on the glass as well, grabbing 11 boards with three being on the offensive end. This is the exact type of production the Lakers need out of Drummond during this playoff run. Drummond was having fun on the bench as well even mimicking James’ post up on Crowder in the third quarter.

Wesley Matthews has played some of his best basketball for the Lakers recently. Although it hasn’t tallied to the score board entirely it’s his defense that’s been getting the job done. As a vet, he doesn’t complain about his lack of playing time, he just comes in and does what is asked of him. He knows that the ball will find its way to him if he does the little things to benefit the team. That is exactly what happened in Game Three for Matthews. After hustling on defense and giving maximum effort, he was rewarded with back-to-back three point field goals to put the game away for the Lakers.

This team is filled with players who are all for the team and genuinely want to see each other succeed. This is encouraging to see as they haven’t spent an entire lot of time together. With all that being said, the Lakers are a scary sight for any team this postseason especially now they are starting to get things rolling.