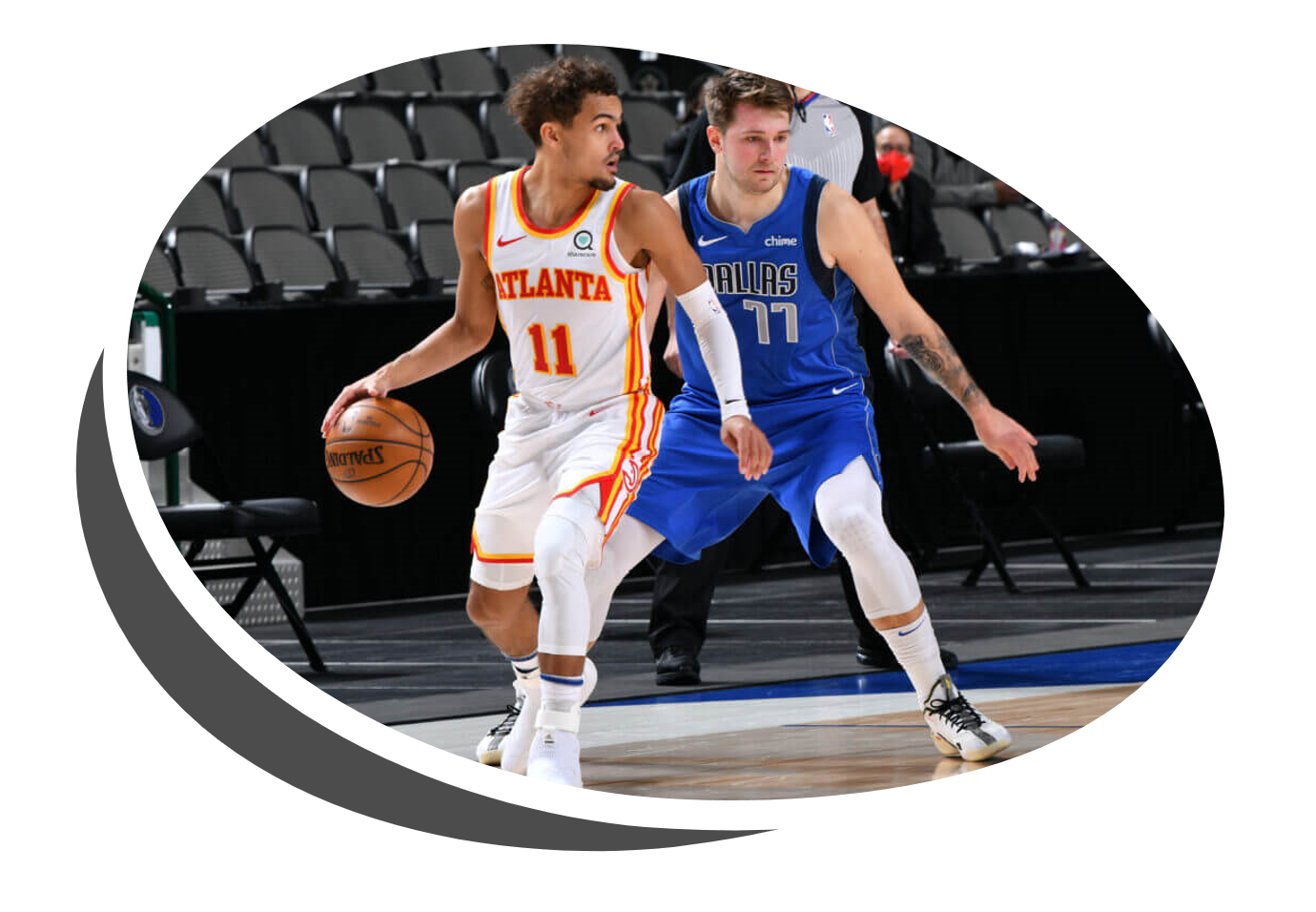 Three summers ago, two of the most electric personalities and talents came into the NBA with heavy expectations as the No. 3 and No. 5 picks in the 2018 NBA Draft – Luka Dončić and Trae Young.

It’s typically always a fun night when you watch Dončić and Young compete for their respective teams, the Dallas Mavericks and the Atlanta Hawks.

But the script was almost flipped as the Mavericks had to trade up to No. 3 to get their hands on Dončić, who owner Mark Cuban saw as the next signature name to carry the franchise, the way Dirk Nowitzki did for 21 years and Dallas’ lone championship.

Last night’s performance was an exception, as Dončić logged 35 minutes, but only about half that in points – and he led the team in scoring, rebounds, and assists, making the Mavericks look extremely one-dimensional in head coach Jason Kidd’s debut last night.

Which begs the question:  Did each team get the player they needed when they made the swap of the three and five – the Mavs to get Dončić instead of Young back on Draft Night in 2018?

Year by year, you’d have the propensity to give Dončić the edge. Given his size, ability to play multiple positions, and the ease with which he can hit on a female referee, it’s an easy choice. Then again, much of that success is attributed to the fact that Dončić had the onus of the Mavericks on his shoulders. He had to produce.

But what were the teams’ records those three seasons?

Young had more thrust upon him, but had the disadvantage of having a coach who leaned more on Young than Young could on him. This put the responsibility for personal and team success on Young, who spent his summers going back to Oklahoma and showing up at the Skinz League, rapidly one of the most prestigious landing spots in June, and not just for a cameo.

Young works tirelessly to improve every facet of his game. During the COVID-19 lockdown, Young was shooting balled up socks into small trash baskets just to keep his accuracy from stagnating.

After 34 games in 2020-21, Young got what he needed in a head coach who had the fire and passion to keep fanning Young’s flame. Not sure Rick Carlisle could have done for Trae Young what Nate McMillan has done.

Carlisle wasn’t doing it for Dončić either, which led to Carlisle stepping away after last season and heading back to Indiana. 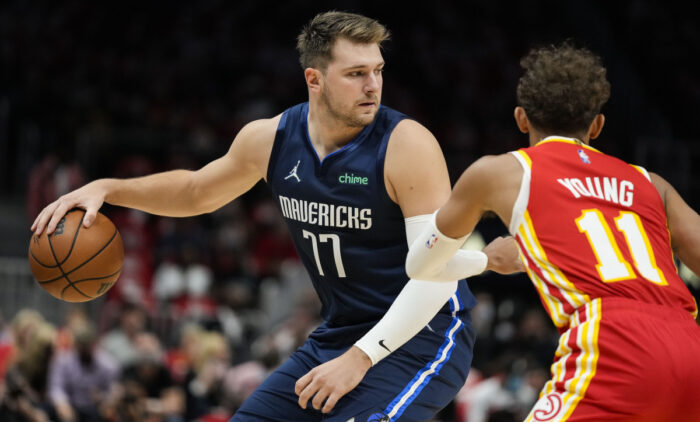 In the end, the argument could go on endlessly – like Mike and LeBron – but I think both players landed where they needed to be to evolve their careers, and the fortunes of their respective teams.

But you wonder if Mr. Shark Tank ever lies in bed after a game like tonight’s and wonders “what if?” 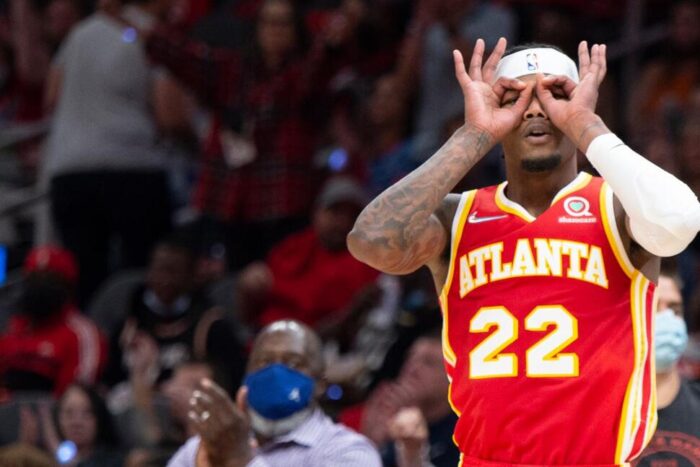 Each of the top six players on Atlanta’s roster hit in double digit scoring last night as the Hawks took down the one-dimensional Dallas Mavericks by 26 points in their home opener at State Farm Arena. The Hawks were led by Cam Reddish’s 20 points, while Trae Young was just a step behind at 19 points and 14 dimes. John Collins added 16 points and nine rebounds, Clint Capela double doubled with 12 and 13, while it was an 11 point finish for both Bogdan Bogdanovic and De’Andre Hunter.

Luka Dončić led in every statistical category for the Mavericks with 18 points, 11 rebounds, and seven assists. Despite playing everyone on the roster but Boban Marjanovic and Moses Brown, the Mavs got walloped in every quarter by the energetic, young Hawks. Jalen Brunson added 17 points, Tim Hardaway, Jr. finished with 14, and Kristaps Porzingis shot four of 13 for only 11 on the night.

I’m not sure what bit the Milwaukee Bucks in the ass more – the injury bug, the Miami Heat, or just gravity – as the reigning champs fell to the sweltering scoring of the Heat in Miami last night by 42 points.

The carnage was done in the first, after the Heat poured on 40 points to the champs’ 17 in the first quarter alone. Miami would go on to outscore the Bucks in every quarter and never looked back. Tyler Herro shot 10 of 18 to lead the assault with 27 points, Jimmy Butler added 21, and Bam Adebayo ended the night with 20 and 13, shooting nine of 13. 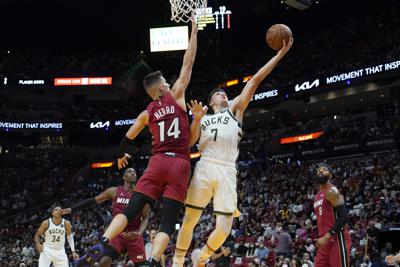 ‘Almost’ only counts in horseshoes, hand grenades, and Los Angeles Clippers games. In as many games, The Golden State Warriors have owned the basketball teams from L.A., beating the Lakers on Opening Night, and the Clippers last night. 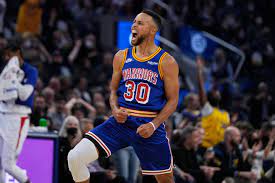 The Clippers fought back from 19 down to come within two of the Warriors, despite playing without Kawhi Leonard (ACL), Keon Johnson (illness), Serge Ibaka (back), Jason Preston (right foot), and Nicolas Batum (personal). Paul George led the way with 29 points, 11 rebounds, and six assists, and hit a long three with ice in his veins to with six seconds remaining to get the Clips up 112-111, but wouldn’t get another opportunity after the Warriors smothers the Clippers following a intentional missed free throw from Ivica Zubac. Eric Bledsoe added 22 points on a respectable 10 of 16 night.

Stephen Curry led the league last night with 45 points,  shooting 16 of 25 and a perfect five of five from the charity stripe, including two to ice the game with five seconds remaining. Andrew Wiggins added 17 and six. The Warriors are 2-0 in the young season.

NEXT UP
Grizzlies at Clippers – Saturday
Warriors at Kings – Sunday