Mae Young Classic: Synopsis And Thoughts Leading Into The Finals 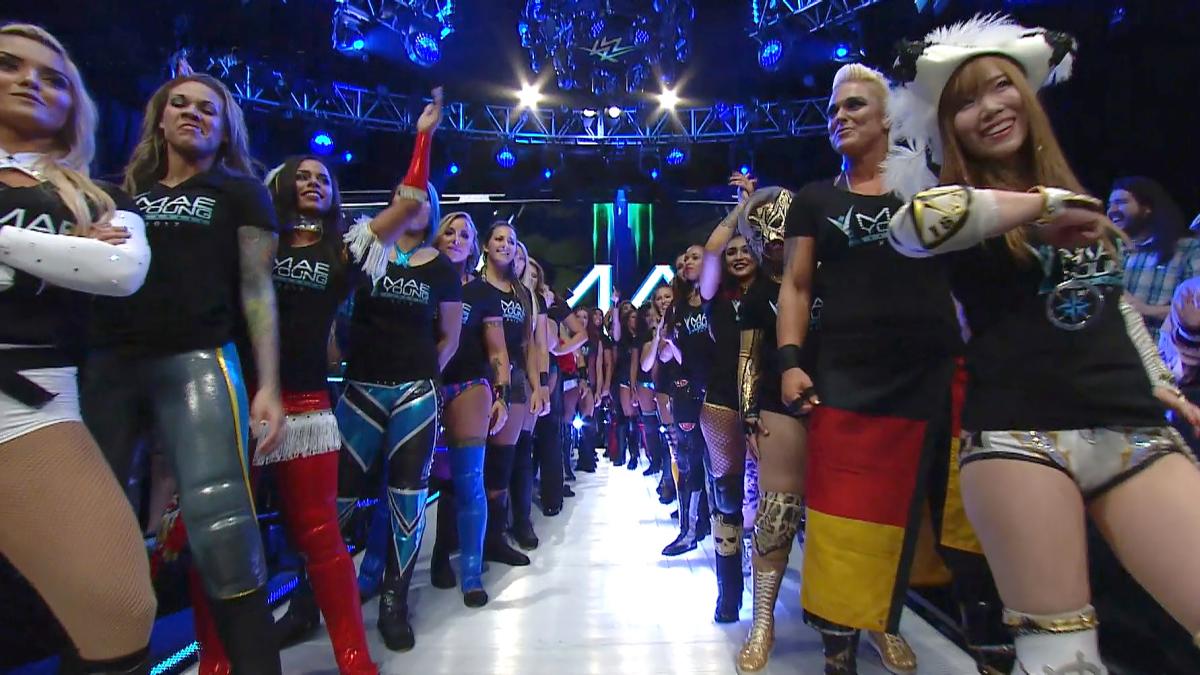 Alright interwebs, after a long hiatus, I’ve put some time back on the laptop and got some viewing of WWE done. When I first heard of the Mae Young classic, I had to admit, I was skeptical. Yes, as of late, WWE have really done a great job at making the pro wrestling scene not just talents that have been created solely by the questionable writing staff of WWE. And this was going to be the first time that the WWE has done an all women tournament. I got on the network, put in my eight hours, and now I have some thoughts.

1. Diverse field: I think that the talent scouts did a great job at looking across the world and finding those ladies that wouldn’t get opportunities otherwise. 13 countries represented in the tournament. Many wrestling schools of WWE alumnists were represented as well, so good advertising for anyone that might be interested in getting the basics down before trying to hit up the Performance Center.

2. Wide range of talent: You had martial arts masters, strikers, MMA fighters, lucha libre, Japanese pro wrestling and high flyers. Granted, there were also ladies that were very green and have A LOT to learn as far as perfecting their craft in the pro wrestling angle. The veteran talent you could obviously tell; they were able to sell much more and their matches seemed to flow extremely well.

3. Believable matches: As far as babyface vs. heel it was clear that they did their best to really program that in. All of the decisions that they made with Pipen Nevin I thought was excellent. That woman has a future with NXT as clear as day. She does not fit the mold of a “Diva” but she knows how to draw a crowd into her matches. Mia Yim was also a great feel good story. It could have easily been her in place of Shayna Baszler because of her experience level, but we’ll get to why I think she didn’t make it further. All of the Aussie women did excellent work. I thought that Rhea Ripley would have been a better choice to make it to the end against Kairi Sane rather than Toni Storm. Not taking anything from Storm but she seems like she isn’t quite the mold for WWE ladies division. There’s room for one steam punk character and that’s Becky Lynch in my opinion.

4. Shortcomings in writing: I kinda wish that they would have made a few more heels more dastardly. Throughout the entire tournament, there was one moment that actually brought heat. Shayna Baszler held a choke hold longer than was necessary to make it into the semi finals. It happened to be against Joey Gargano’s wife, Candice LeRae, and it actually drew him into the ring from the crowd. I feel like they squandered an opportunity to have another antagonist make an impact with the German powerhouse Jazzy Gabert. I could care less if Abbey Laith is a Mae Young protege and has learned the Alligator clutch, this may have been an effective move in the 50s, but against the other competitors it was very lackluster way to win a match. It’s far from a hold, it’s a firm way to keep an opponent’s shoulders on the mat. Jazzy Gabert could have at least used her strength to make it further against the more technically sound ladies on the program. Tessa Blanchard should have been paired with someone else other than Kairi Sane. Yes, if you really want to get the only representative of the Japanese style to get over then I understand, but why don’t you place her with someone like Reina Gonzales? A very solid wrestler with a claim to a 2nd generation wrestler, but not as much of a name and skill set as Ms. Blanchard. That first round match could have easily been the finale. And being the daughter of one of the greatest heels of the Carolina territory, you could have made a lot of buzz about promoting her. Granted, I feel like Tessa has great storyline potential and that she will be an obvious sign for NXT.

5. Time to promote and gain momentum: They really did a poor job of really allowing this tournament to hold water and gain interest on the network. They could have easily drawn this out over two months and had the finale live on Raw or even at a major PPV, say Survivor Series. I get that this was experimental and that you were asking you legions of subscribers to hop on board for more exposure to the brand, but really, releasing everything at once and making it like a binge watch of a television series? Come on… Let the ladies cut some promos on the bigger shows or allow them to actually develop some sort of a story line so that it isn’t just solely about the tournament.

6. Crap or get off the pot: Okay, here’s my take on the 4 horsewomen of MMA vs. the 4 horsewomen of pro wrestling: Make it happen or let it die. The have been alluding to this crossover since Ronda Rousey got in the ring at Wrestlemania a few years back. Now she has her “posse” and they were in the crowd to support Shayna Baszler and they’re taking the attention away from those that are actually wrestling. If you’re gonna make this happen, and this is the way you’re going to it by having Baszler win the tournament and then get Rousey and the others involved in some sort of a good vs bad faction then hurry up with it already. This is something that has the office written all over it and it will never equal up the The 4 Horsemen idea because it was organic and the male version were all consummate professionals not cross over stars that are looking for ways to continue their careers after their fighting careers are over.

That being said, I never thought I’d be into a women’s tournament. I know that there are still other women that were not featured in this event that could have made some waves, but I do feel like this could be something that could happen more than once. Now that you’ve read my thoughts, I encourage you to watch the finals of the Mae Young Classic because it’s hard to say what way they will really go with this. I don’t think the winner will be elevated to the main roster right away, but NXT is looking to fill it’s women’s champion spot and I could think of no better of a number 1 contender than the winner of the tournament.