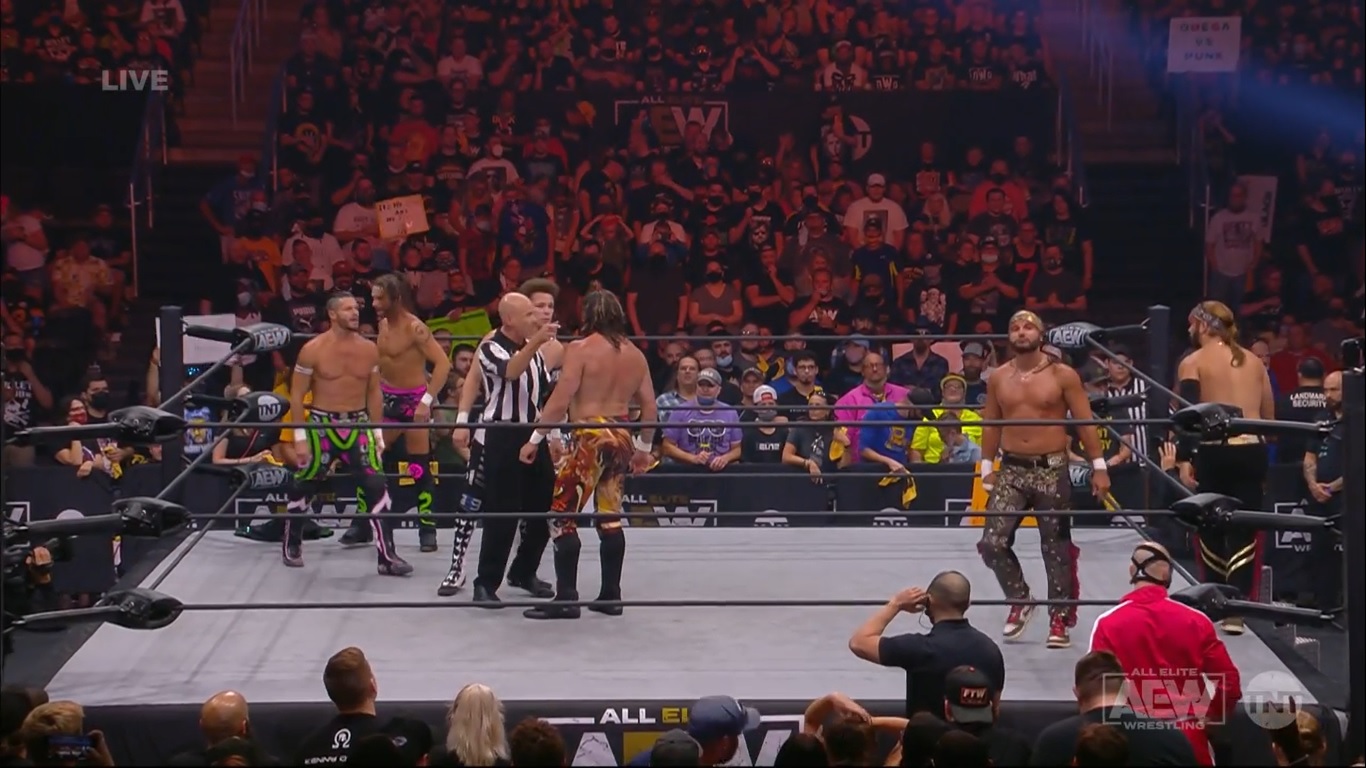 With All Out in the rear view mirror, it is time to look back at August for the Match of the Month. In an episode that featured Dr. Britt Baker in her hometown, not much was going to overshadow her appearance. Although, one match stood out on the card as well as the rest of the month.

The opening contest on the August 11 episode of Dynamite lit the crowd on fire for the rest of the night. Dante Martin teamed up with Matt and Mike Sydal to face The Elite’s Kenny Omega, Matt Jackson and Nick Jackson. In an amalgamation of the previous two Match of the Month winners, this firestorm was born.

There is something special about the opening match on Dynamite. It is not just that it the first thing that viewers see when the show starts. Rather, it typically features no commercial breaks. This allows the wrestlers to go all out without having to worry about what makes it on TV. The performers are given free reign to capture the attention of first time watchers and channel surfers as well as long time viewers. The Elite, The Sydal Brothers and Dante Martin did just that.

The bond between the Sydal’s and Martin was built throughout a few matches back in June when Matt defeated Martin twice. There was a lot of mutual respect after their technical and acrobatic contest that was June’s Match of the Month between the young newcomer and seasoned veteran. But on August 11, the former foes were allies against a common goal.

Across the ring from Matt, Mike and Martin were the best in the world (no, not you CM Punk). Omega and The Young Bucks, who held the AEW World Championship and the AEW World Tag Team Titles respectively, were not to be taken lightly. The three members of “The Elite Squad” however, did not seem to mind their opponents too much before the contest started.

Match of the Month

But that would change quickly as the match was underway. After taunting Matt Sydal, Matt Jackson soon found himself in the wrong corner. A pair of deep arm drags saw Mike bring Matt Jackson down to the mat in a cradle to pick up an early upset. As Dante was tagged in, Matt Jackson preyed on his youth and using some underhanded tactics, was able to tag out. But Dante Martin quickly responded and ascended an invisible ladder to deliver a beautiful Tijeras to Matt Jackson. He proceeded to hit a sky-high cross body onto Matt, but the champion kicked out.

The commentary team, with the addition of Don Callis, did an excellent job putting over how talented and skillful the Sydal’s and Martin are. Even though Callis’ boys were on the receiving end of the artistic offense, he could not help but give the challengers props. “Mike Sydal impresses me more every time I see him,” mentioned Callis after a standing moonsault.

The champions took over as the match continued thanks to a double-team on Mike Sydal. A tandem face-buster and Kotaro Krusher from The Elite nearly ended the contest, but Mike kicked out. Mike, who flipped out of a suplex, got the tag to his brother. Matt then unleashed a flurry of kicks to gain the advantage.

The Sydal’s double teamed Matt Jackson and both inflicted submissions on him in the middle of the ring. It took Omega sauntering up to Matt Sydal to break the hold. Omega hit a pair of his patented Snapdragon Suplexes on the Sydal’s, but Martin was wise to the third attempt. In a fantastic counter, Martin backflipped out of the maneuver, vaulted off the bottom rope over Omega’s head and delivered a thunderous enziguri.

Martin on My Mind

ARE YOU SERIOUS! @lucha_angel1 is about to jump out of the gym here! #AEWDynamite #AEWonTNT pic.twitter.com/0D1AfZ3gWi

Martin quickly retreated to his corner, begging for the tag. Matt Sydal, urged on by the roaring crowd, made a dive and successfully tagged in the new fan favorite. He lit up the opposition, in an act of “perpetual motion personified” to quote commentator Excalibur. After leaping to the top rope, balancing for a second, then delivering a Tijeras to Omega standing outside the ring, Martin walked the ropes once again and hit a moonsault on Matt Jackson which nearly won the match.

Omega ran in to swing the tide like only he can and found success. He completely cut off all momentum with a stiff V-Trigger to Martin’s head. Omega positioned himself to deliver a One Winged Angel to Martin. But as Omega tucked Martin’s head, Martin flipped out the same way Kazuchika Okada did in one of his previous legendary bouts with Omega. After some tight mat wrestling, Omega sprang to his feet and hit another V-Trigger on Martin.

The Young Bucks superkicked The Sydal Brothers as Omega was able to successfully hit a One Winged Angel on Martin. The three champions then brought him to his knees. The trio drove three of their own knees into his skull to close the match.

While not coming away with the win, Martin was elevated right up to the level of Omega and the Bucks. He countered the most devastating move in professional wrestling and pushed three of AEW’s champions almost to their limit. Martin looked incredible. His high flying abilities capture the minds and hearts of fans.

The five established veterans in the ring did a perfect job of making Martin look and feel elite. And that is exactly what top talent should be doing with the younger members on the roster. A championship has little to no meaning if there are no credible opponents. While a championship reign for Dante is still in the distance, it is there, and we will be waiting.

To catch up on a previous Match of the Month click here: July, June, May, April, March, February, January