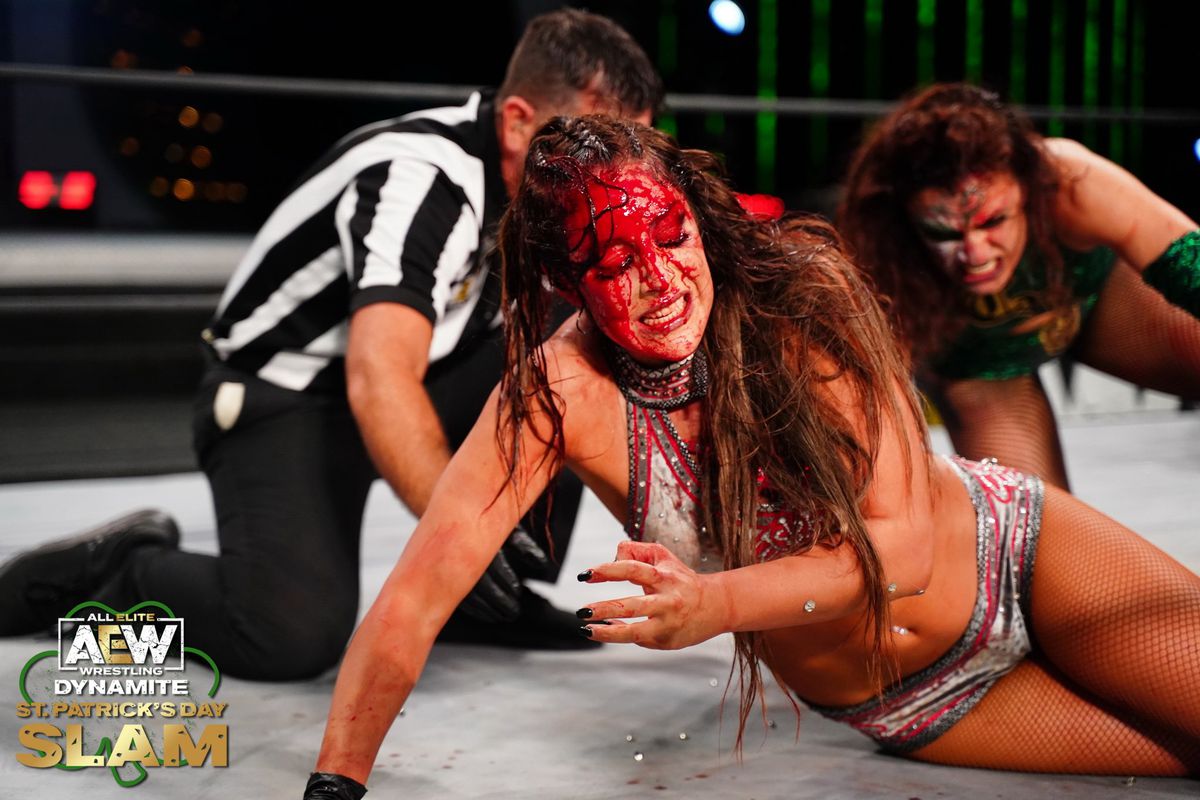 The list of match of the month nominees was a bit shorter despite five episodes of AEW Dynamite to pick from across March. The reason though, is because of one blow away match. It will come as little to no surprise that the best Dynamite match belongs to Dr. Britt Baker and Thunder Rosa. Their Lights Out Match on March 17 made history. Not only was it the first Lights Out Match on Dynamite but also, it was the first women’s main event ever in AEW.

Coming into the match, skeptics voiced their opinions online and over the airwaves. Three Lights Out Matches had already taken place. Jon Moxley fought Kenny Omega, Omega battled Joey Janela and Moxley brawled with Janela. Given the positive reception of the previous matches, could this fight live up to its predecessors? Would the women be able to match the violence and brutality that was on display in the previous iterations?

The short answer is yes. In arguably the best women’s match on American soil, Dr. Baker and Thunder Rosa went to war for 16 minutes. It was obvious from the beginning that the ring would not be able to contain the pair of warriors. Not long after the opening bell, they ended up outside the ring, using steel steps, metal guardrails and solid ring posts to brutalize each other.

Just a handful of minutes into the match, Baker cut open Thunder Rosa. Rosa’s white face paint across half her face contrasted with the red streaming down the other side. As the match continued to escalate, the women continued to build momentum, keeping fans hooked in. Consequently, three more weapons were added into the mix, tables, ladders and a heap of chairs. The chairs made an uncomfortable resting place for Thunder Rosa after Baker suplexed her from the top rope. What followed birthed a moment that will become iconic.

Dr. Baker’s assistant, Rebel, had slid a ladder into the ring. Baker had evil intentions in mind for the damage she was set to inflict. Rosa, recognizing her situation, bounced Baker’s head off the edge of the ladder. Then after pinning Dr. Baker into the corner with the ladder, launched a missile drop kick into the ladder which split Baker wide open. As a result, the immediate surrounding canvas began to stain red. Within minutes, Dr. Baker had donned a crimson mask. The women threw everything they had at each other, and by the end, they both looked like stars.

What’s Next for Thunder Rosa?

Not only did this match meet expectations, but it far surpassed them. The contest put to rest a wide range of complaints that “fans” had about the match and the women’s division in All Elite Wrestling. If AEW can continue the momentum in the women’s division from this match, surely other women will begin to see Jacksonville as a location where their careers can thrive.

On AEW Dark: Elevation, Diamonte let Thunder Rosa know that a target was on her back, and she would be coming for it. Never one to back down, Rosa let her know that she would be ready any time. Both of these women have strong lucha libre backgrounds and a high level of work. It seems like they have been put on a collision course to help continue elevating the women’s division and each other.

Dr. Baker’s Path to the Top

At the time of writing (March 31), Dr. Britt Baker’s next step is unclear. But I think the answer is right in front of them. Because the Lights Out Match will not count against her record, Baker has been on quite a tear in singles competition. In her previous eight matches, she has only lost once. She is currently positioned at fourth in the power rankings for the division. Above her are Tay Conti, Red Velvet and Ryo Mizunami. With this in mind, Red Velvet would be a solid stepping stone for Dr. Baker on her journey for the championship. Now might be the time Britt should make her claim for the AEW Women’s World Championship after having the Match of the Month.

In short, Baker is gold. In the women’s division, she is unrivaled on the microphone and her personality leaps off the screen. She was the first woman signed to AEW and calls herself the face of the women’s division. On May 30, at Double or Nothing, Britt Baker should defeat Hikaru Shida for the Women’s World Championship.

Shida won the championship at Double or Nothing the year before over Nyla Rose. After a yearlong reign, I think it is time for a new champion. Hikaru Shida, you have an appointment scheduled for May 30, with Dr. Britt Baker D.M.D. Please let the office know if you wish to confirm this appointment.

To check out February’s Match of the Month, click here. And to see all my other articles including January’s top contest, click here.

Note: PPV matches are not eligible for Match of the Month but will have a separate list for themselves. However, they are still eligible for the AEW’s Top Matches of 2021.