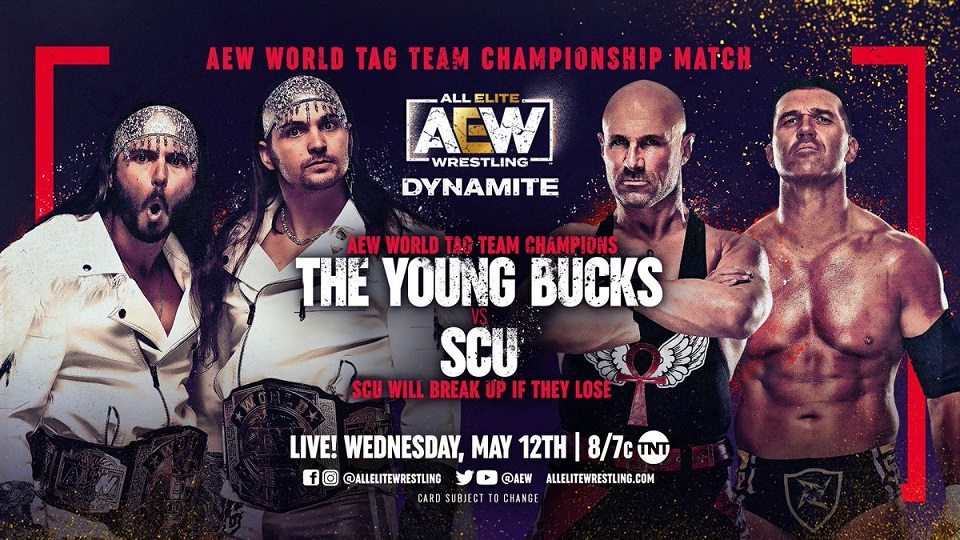 The Young Bucks battled SCU in a title vs. team match. The fight between these two Southern California tag teams was another instant classic.

Months ago, with the Young Bucks as champions, SCU’s Christopher Daniels and Frankie Kazarian issued a challenge to themselves. The next tag match they lost would be their last as a team together. Every time SCU stepped into the ring, their backs were against the wall. After compiling six consecutive wins in 2021, they reached the top of the rankings. Daniels and Kazarian were in arguably the top form of their career.

SoCal Uncensored had a chance to reclaim tag team gold. It was all or nothing, win or break up. Their 15 match winning streak, stemming from December 17 was being put to the test. Daniels and Kazarian first faced the Jacksons on March 19, 2013. Now, 2,976 days later, they would face off again with the partnership between SCU on the line.

The champions, Nick and Matt Jackson of The Young Bucks, were on a warpath. Everywhere they went, the brothers left a wake of destruction. The Sydal Brothers, Death Triangle and even former AEW Champion Jon Moxley had felt the wrath of the new “old” Young Bucks. Wherever they went, the Bucks were flanked by their entourage. Don Callis, The Good Brothers and Brandon Cutler.

These former friends, turned rivals, met May 12. Everything was on the line. There was a fire inside SCU. The challenge “woke me up,” said Christopher Daniels in an interview before the match. Kazarian put it plainly, “we have everything to lose and also everything to gain.” But would they be able to contend with one of the greatest tag teams of all time?

The Young Bucks sauntered down to the ring to sporadic cheers mixed in with groans and boos. They showed off their brand new gear made by Brandon Cutler’s wife, Denise. Gilded black pants, red and gold jackets, headbands and of course, a pair of Air Jordan 1 Mid “Bred.” Kazarian started the match with Nick and immediately found his rhythm. The first few minutes saw “vintage” SCU offense which provided an early advantage. Once Nick was able to tag in his older brother, the tide started to turn. Matt delivered a massive drop kick to Daniels, who was standing on the outside which propelled him into the guardrail. The champions kept applying the pressure to Christopher Daniels. The tandem delivered a powerbomb onto the apron and then a senton onto the floor.

Coming out of the commercial break, the roles were reversed. It was now SCU with the upper hand. But their momentum would not last long. Throughout the match, whenever it seemed like SoCal Uncensored would have an opening, Matt and Nick would quickly shut the door. The younger and faster competitors held the championship for a reason. They outpaced SCU and took every opportunity they could.

Possibly the largest shift in momentum occurred when Nick superkicked Daniels’ head into the square ring post. That shot split his eyebrow right open, a wound which would require stitches after the match. Distracted by the damage he just inflicted, Nick nearly got caught for the pin by Kazarian. But then it was Frankie Kazarian who was distracted a moment later after catching a glimpse of the crimson mask adorning Daniels’ face.

Whether it was the Fallen Angel’s leaking forehead or years of experience, the Young Bucks sensed blood in the water. They quickly started to capitalize on the man advantage as Kazarian was alone in the ring. But despite wrestling shorthanded, the wily veteran almost found an opening to win the match. Unfortunately for SCU, Doc Gallows caught referee Rick Knox’s attention just before a pin attempt by Kazarian. Frankie had Matt pinned for six seconds, but Knox never noticed.

Again, the 43 year old Kazarian caught Matt, but this time delivered a “Styles Clash,” the finishing move of former Bullet Club leader, AJ Styles. The other Jackson came in to break up the pin just in the nick of time. And then the tide changed again, a superkick and piledriver nearly spelled the end for SCU. But this time, it was Christopher Daniels who was there to save the day. With blood all over his body, Daniels tagged himself in as he looked to close out the match. 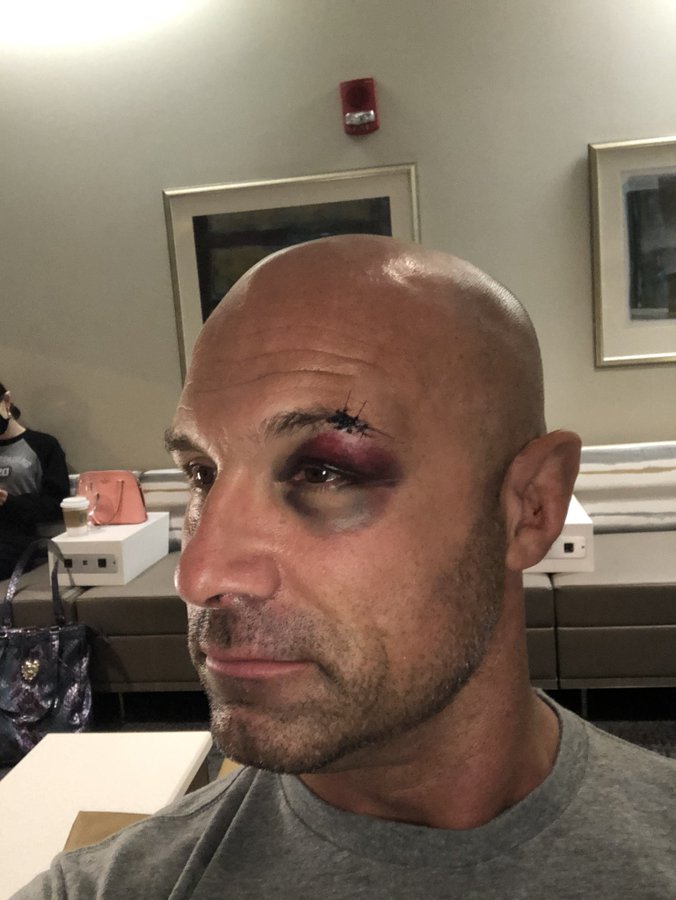 Perhaps it was the loss of blood or his old age catching up to him, Daniels seemed out on his feet. That did nothing to help his case against Matt Jackson. The 51 year old caught Matt on instincts alone but did not have the strength to execute his plan. Matt dropped Daniels easily. Struggling to get to his feet, the Fallen Angel poured blood all over one of Matt’s most prized possessions, his shoes. Disgusted, Matt feigned sorrow as he set up for a superkick, yelling out, “I’m sorry, I love you.” The same line that Shawn Michaels delivered to Ric Flair when The Nature Boy was retired at WrestleMania 24.

Daniels was down, but not out as he escaped the pin. Whether it was too much showboating or a lack of conviction, the Bucks were not yet able to put down SCU. Even though the numbers inside the ring were even, the Young Bucks’ entourage distracted Knox again enough to give Matt an opening. Blinding Daniels with cold spray, planting a superkick on the jaw of Kazarian and then striking the aerosol can off the skull of Daniels was thought to be the winning combination. But still victory avoided the Bucks for the moment. Seconds later though, a BTE trigger to the bloody face of Christopher Daniels ended the existence of SCU.

MATCH OF THE MONTH

A lot of moving parts went into this contest to make it great. Christopher Daniels played his role perfectly, an old veteran whose mind can still go but his body is slowing down. Kazarian, as the aging competitor who still has enough “dad strength” to put up a fight. The Young Bucks, arrogant champions who thought this match would be a walk in the park. Everything came together perfectly.

The drama in the contest escalated to a boiling point. It never once felt like the match went on too long. Additionally, coming into the match, it felt like SCU had a legitimate chance to win. The problem was that even if SCU was perfect, the Bucks needed to commit an error for them to lose the titles. There were times, though, when fans thought SCU had caught their opponents, but near falls will not win you matches. Perhaps if Daniels was not cut open, SCU could have overcome the challenge.

Regardless, Daniels and Kazarian came up short. Their tenure as a tag team ended, but did they ever go out with a bang.

To catch up on the previous match of the month, which also featured the Young Bucks, click here. Also, stay tuned to Back Sports Page for an upcoming article on AEW’s Double or Nothing pay-per-view matches and their ratings.