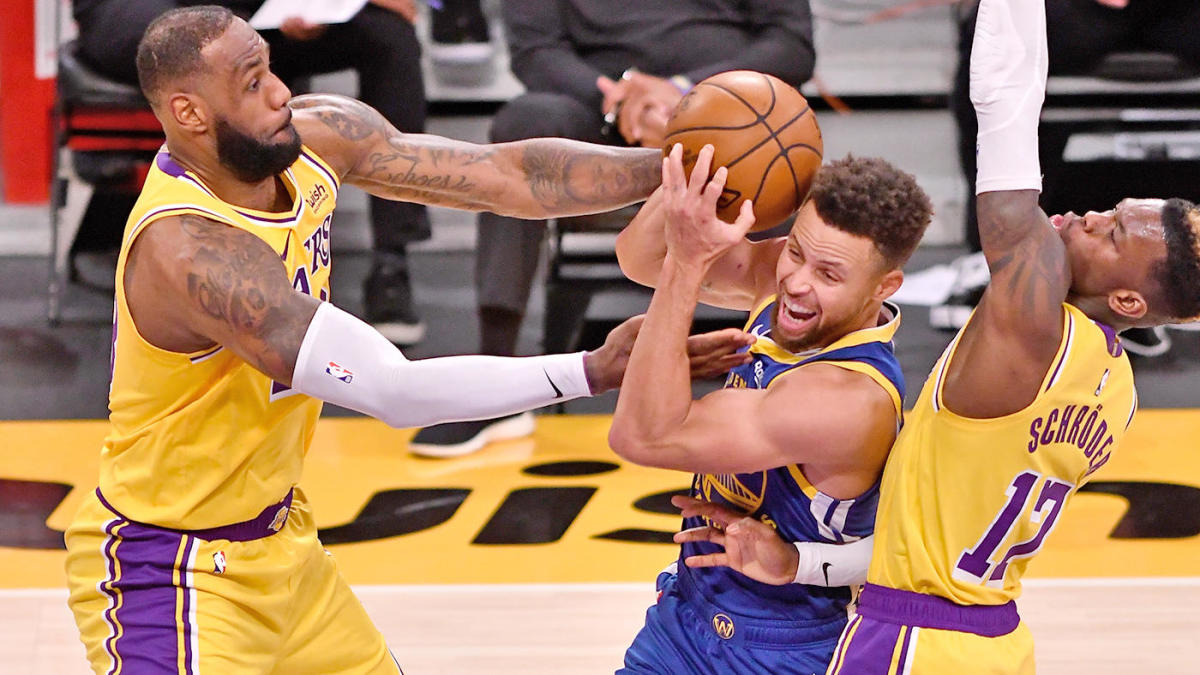 After missing both Anthony Davis and LeBron James for extended periods of time, the Los Angeles Lakers are fighting for their playoff lives, facing the Golden State Warriors in the league’s new Play In Tournament. This is a perfect matchup for the league in many aspects. To begin with, it is LeBron James vs Stephen Curry which is always a sight to see. After going against each other for multiple years in the Finals, they finally meet in the Western Conference bracket. The winner will face off against the Phoenix Suns as the seventh seed, while the loser faces the winner between the San Antonio Spurs and Memphis Grizzlies for eighth seed.

When it comes to stopping Curry, arguably the greatest shooter of all time,the only hope is to try and contain him. However, that is exactly what the Lakers plan to do. What Los Angeles has on their side is that these aren’t the same high powered Warriors from years past. Instead, they are athletic wings and role players. If the Lakers proved anything in last year’s playoff, it’s that they can contain dynamic guards. They did an excellent job containing Damian Lilard, James Harden and Jamal Murray, playing them all the exact same way. Once the high pick and roll comes the big hedges hard into a double to get the ball out of the guard’s hands forcing someone else to make a play. After passing the ball the one who is guarding the dynamic guard only pays attention to him, denying an entry pass from all angles.

However, this is going to be difficult in Curry’s case because he constantly moves without the ball. To whoever is guarding Curry, it will be like a game of tag, chasing him on all sides of the floor in hopes to stick with him. If there is one thing the Lakers can do to slow down Curry it’s to be physical with him. In the past this was a key that teams chimed in on when facing the Warriors. Especially in the 2016 Finals where the Cleveland Cavaliers hit him on screens, down low in the paint or whenever it was possible to give a bump. This is vital for the Lakers success in tonight’s matchup because Curry has had quite the season this year. For the regular season Curry put up an MVP campaign averaging 32 points, 5.5 rebounds and 5.8 assists.

Lakers Have the Size

If the Warriors have the superior shooting, then the Lakers have the superior size in this matchup. The twin tower effect of both Anthony Davis and Andre Drummond are key to a Lakers win. Although they have the size advantage, it’s making sure they use that advantage to their benefit. In the past, the Lakers have drifted away from using their size in an attempt to be a jump shooting team. That isn’t how this team is built. Instead of trying to play from the outside in as most teams try to do, they are an inside-out team. With a front line of James, Davis and Drummond, it’ll be difficult for most teams to out rebound them. Keep in mind that LA also has another seven footer on the bench in Marc Gasol as well as physical performers in Markieff Morris and Montrezl Harrell.

For a young team such as Golden State, they tend to avoid being physical. This is the exact opposite of what the Lakers like to do. When LA wants to get down in the trenches and play rough they will especially look to take away their opponents’ will. Although the Warriors do have Draymond Green, who is as physical and as tough as they come, he doesn’t have the size to stay with any of the Lakers’ bigs. Not to mention that if he is on LeBron , who will guard Davis? And vice-versa. Just like the playoffs it’s all going to come down to matchups and the Lakers have more mismatches on their side.

Just like Curry, LeBron won’t allow his team to lose. If there is anything that we know about LeBron James in his 18-year career, it’s that he comes up big in big time games. This is no different because should the Lakers win they have a more favorable matchup against the Phoenix Suns than the Utah Jazz. This is because the Suns are young and inexperienced in the playoffs besides Jae Crowder and Chris Paul. However, we aren’t going to look past what is in front of us in the Warriors. In a sense this is somewhat of a legacy game for both Curry and James.

Keep in mind that not many expected Curry and the Warriors to be in this position. While most believed the Lakers to be among the top seeds, injuries derailed them. With the Warriors playing with house money in a sense, the pressure is on the Lakers to perform. For James should he lose, it will put a bitter taste in his mouth especially because of his past playoff matchups with Curry. Although Curry has the edge in wins against James, it’s Curry who has had the superior teams. Now that the table has turned we hope to see a great basketball matchup once again with these two.

The Memphis Grizzlies Have a Sixth Man Problem
Heat vs. Bucks II, What Makes This Year Different?