Meet the Most Important Man for the Buckeyes on Monday, and It’s Not Who You Expect 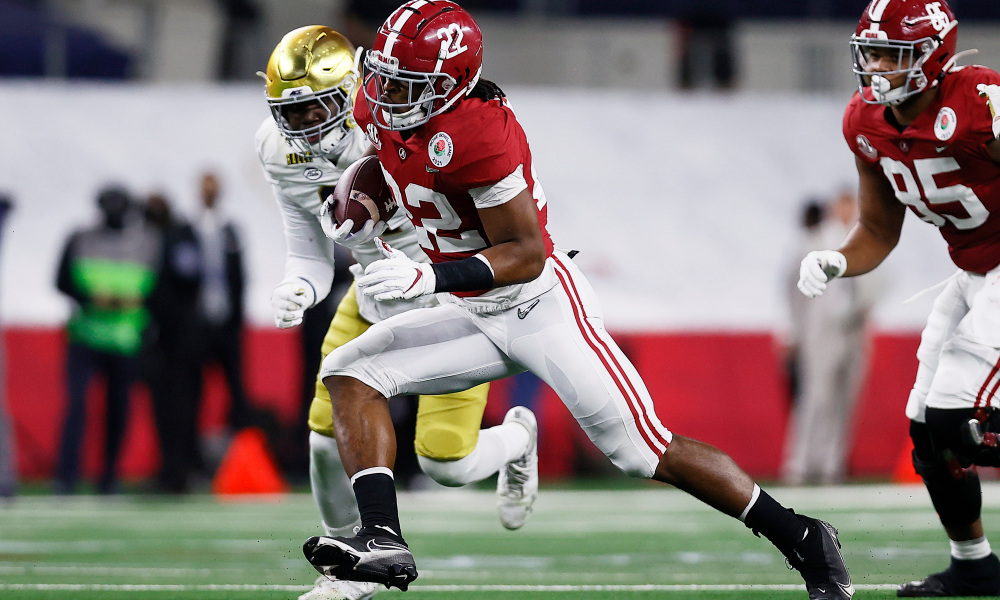 The Ohio State Buckeyes will face Nick Saban, Mac Jones, Heisman-winner Devonta Smith, bruising back Najee Harris, and Alabama on Monday night. Everyone in the country knows about Saban’s big three this year on offense. Devonta Smith won the Heisman Trophy on Tuesday night, becoming the first receiver since Desmond Howard for Michigan in 1991. He was joined in the virtual ceremony by the third leading vote getter, and teammate, quarterback Mac Jones.

Jones was many peoples favorite to win the award until Smith had a huge game in the SEC Championship. On top of those two, Tide running back Najee Harris will join them in the huddle on Monday night in Miami Gardens, Florida. He carried the ball only fifteen times versus Notre Dame, but he racked up 125 yards rushing.

How is it possible to stop an Alabama offense that could also be adding in previously injured receiver Jaylen Waddle? Well, you can’t stop it, really, but you can slow it down. Haskell Garrett, Ohio State interior defensive lineman, will be tasked with playing great run defense, while also getting inside pressure on Tide quarterback Mac Jones. The funny thing is, Garrett is just happy he’s alive to be able to play in this game.

Haskell Garrett arrived in Columbus in via Nevada powerhouse Bishop Gorman. Garrett, who is originally from Vermont, moved to Hawaii, and then ultimately ended up in Nevada after his father died when he was only 13. Garrett had a quiet career at Ohio State before his senior year. From 2017-2019, Garrett managed to get only 20 tackles and one pass defended. However, this year in has been an entirely different year for Garrett, and the Buckeyes are benefiting from his great play.

In August of 2020, right before his senior season was about to start in Columbus, Garrett was shot in the face while trying to break up a fight between a man and a woman in Columbus. He was immediately transported to the hospital. If someone puts a gun anywhere near your face, any shot that is taken is likely going to kill you, however, Garrett got incredibly lucky that night. He was shot in the face, but amazingly the bullet went in and out of Garrett’s two cheeks. After the incident, Garrett spent two days in a Columbus hospital waiting to be released. At the time he also thanked first responders, the Columbus Police Department, and the numerous people in the hospital who helped him recover fully.

After losing most of their defensive line to the NFL or graduation, Garrett came into the 2020-21 season with more responsibilities on his plate. With no real superstar defensive end like they’ve had in the past, Garrett and Tommy Togiai were tasked with controlling the interior of the line of scrimmage for the Buckeyes defense this year, and boy have both of them looked good doing so. On the year, Togiai has 23 total tackles with three sacks, one forced fumble and batted down two passes. Garrett has been the quieter one this season, while still performing incredibly well. He has 11 total tackles on the year along with two sacks, and a pick six. A lineman’s dream! While both Togiai and Garrett need to play well against Alabama if Ohio State has any chance. However, this year has been a revelation for Garrett and there is not better man up for the task.

Obviously every college football fan around the country knows that Alabama’s offense is the real threat this year, where it has been there defense in the past. However, It’s possible that quarterback Mac Jones, receiver Devonta Smith, and running back Najee Harris will all be drafted in the to 20 of the 2021 NFL Draft. However, Garrett’s interior presence will be key.

Edge rushers and linebackers get a lot of the statistical credit on defense. However, the interior linemen are the ones who set those players up to make those types of plays. Togiai and Garrett are two of the best interior linemen in the country and if they can create pressure on the inside, Ohio State will have a great chance to win.

I singled out Garrett here, not only because he is the better and more athletic of the two DT’s, but he isn’t supposed to be playing in this game. Somehow when a gun was thrust in his face and he was shot, it went through both cheeks, and came out clean. That doesn’t happen very often, if ever. Garrett has been a man on a mission this year and I expect him to continue to follow that path.

There are obviously some other key match-ups that will be looked into before the National Championship Game on Monday. However, for Garrett at least, this will be the biggest game of his life, and if he can come out and play well, the Buckeyes have a great shot to come out and shock the Tide.