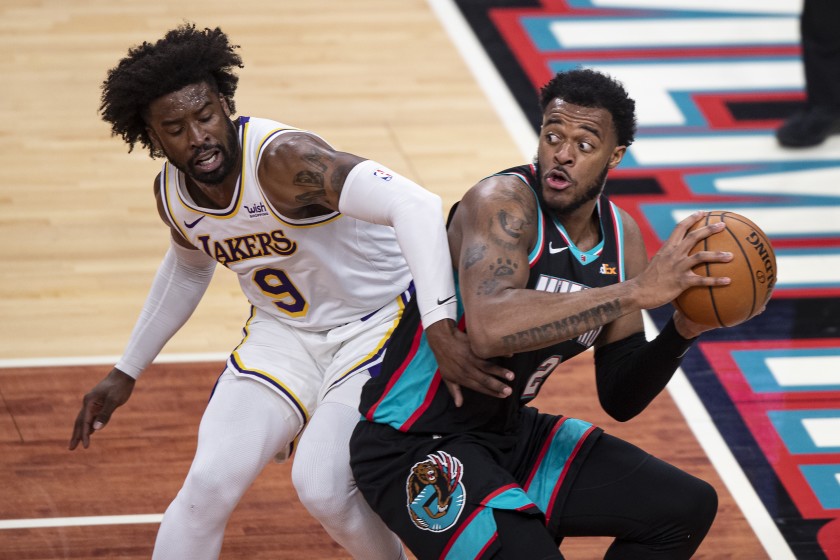 The Memphis Grizzlies have thrown some of the NBA’s toughest matchups at rookie big Xavier Tillman Sr. In a series of contests with the Los Angeles Lakers, the team trusted him to guard Anthony Davis, and down the stretch in their matchup with the Cleveland Cavaliers, the Michigan State product matched up regularly with Andre Drummond. Though stepping up to the plate has been a learning experience for Tillman, it’s clear that the Grizzlies are enamored with his ability. After all, which other rookie is trusted with the responsibility of guarding multi-time All-Stars in each of their first three games?

“I think X is earning his minutes,” said Taylor Jenkins after the Grizzlies’ 90-94 loss to the Cavs. “Defensively…no matter what his matchup is I think he;s doing all the right things and [I] just love his approach on that end of the ball.” Indeed, Tillman made a noticeable impact on the defensive end, racking up a block and a steal in his efforts against Cleveland. At just 6’8”, one might expect the rookie to get pushed around by more experienced bigs, but at 245 pounds, Tillman has done an expert job leveraging his size to prevent easy shots. As such, Jenkins noted that he expects the Grizzlies to continue upping Tillman’s minutes, even after they recently bumped up his playing time to twenty minutes per game.

Though these responsibilities would be a hefty sign of trust for any rookie, it’s especially notable that Tillman has stepped up to the plate as a second round draft pick. After all, he’s the only rookie selected outside of the first round to average over fifteen minutes per game. “I think it just shows that our front office does a really good job of finding guys that are gonna fit our team system,” noted Brandon Clarke. Clarke himself is a shining example of the organization’s willingness to trust in their later draft picks. As the 21st pick in last year’s draft, Clarke was given 22 minutes per game off the bench, beating out several lottery picks to secure his spot on the All-Rookie First Team with his signature brand of hustle and verticality.

As for his thoughts on Tillman, Clarke didn’t hesitate to echo Jenkins’ sentiments: “I think that X fits our team very well. He’s a really, really strong guy that can do lots of things on the court and plays really well with the guys.”

So, how do the Grizzlies keep finding late round gems at the forward spot? The most apparent throughline for the cases of Clarke and Tillman is maturity. Clarke came out of Gonzaga as a tremendously seasoned prospect, playing three full seasons of college ball and declaring for the NBA Draft at age 22. Tillman doesn’t turn 22 until the 12th, but he emerged from his time in East Lansing as a similarly complete draft asset. Having spent three years at Michigan State, it’s clear that the years marinating in the wisdom of Tom Izzo have done wonders for the rook.

Don’t just take that from me either. De’Anthony Melton specifically pointed to Tillman’s collegiate experience to explain how the Spartan has looked incredibly NBA-ready. “Doing four years at Michigan State, he understands coaching and he understands where he excels at and how to get guys open. He’s just a winner…he just goes out there and continue[s] to make the winning play and winning effort all the time”

The Grizzlies should be grateful for Tillman’s play, as the onslaught of premier frontcourt opponents doesn’t seem to let up for quite a while. In their next eight games, they’ll be facing off against Brooklyn’s Jarret Allen-DeAndre Jordan combo, Joel Embiid and the Sixers, and could potentially square up against both Jusuf Nurkic and Karl-Anthony Towns multiple times. Given that Memphis has been on the losing end of several close, low-scoring games, Tillman’s defensive presence will be nothing short of crucial to help swing a few key possessions the Grizzlies’ way. Desperate for a win against a Nets team that’s missing several of its headline players, expect Jenkins and company to lean even further into Tillman’s hustle in the near future.