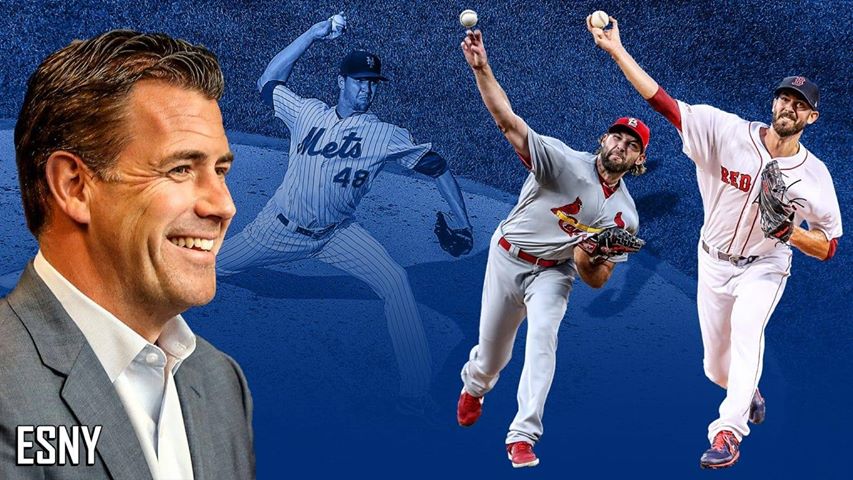 You know that old saying “If you have two quarterbacks it means you have none.” That’s where the New York Mets rotation is at having signed Rick Porcello and Michael Wacha to replace Zack Wheeler’s one spot in the rotation.

The Mets finished the 2019 season with an elite rotation of Jacob deGrom, Noah Syndergaard, Zack Wheeler, Marcus Stroman, and Steven Matz. Their rotation combined for the third-highest fWAR in all of baseball.

Yet, the Mets, who missed the playoffs last season with their elite rotation, let Zack Wheeler sign with the division-rival Philadelphia Phillies after he became too “expensive” to retain. The Mets decided they would rather go the cheap route instead of investing in their homegrown stud to fill out their rotation.

Wheeler checked in with the Mets before he signed a 5 year/$118 million dollar contract with the Phillies. Wheeler will make $23.6 million in 2020 while the Mets paid $13 million total for the services of Porcello ($10 million) and Wacha ($3 million).

The Mets saved $10.6 million dollars not bringing Wheeler back, but their rotation has gotten much worse. Porcello might have won the 2016 AL Cy Young Award (I would have given it to Justin Verlander), but he isn’t very good anymore.

While a few seasons ago it was looking like Porcello might get a huge payday this offseason, Porcello had to settle on a one year deal with the Mets for $10 million dollars. The Mets are hoping that Porcello still has a decent season left in him to solidify the back end of the rotation.

With Porcello expected to make the rotation, signee Michael Wacha’s role with the team becomes unclear. During the 2019 season, Wacha had an ERA of 4.76 over 126.2 innings with an fWAR of -0.2. Wacha is a project for the Mets as he tries to return to the promise he showed early in his career.

Wacha was a first-round pick by the St. Louis Cardinals during the 2012 draft. Wacha made his Cardinals debut only a year later in 2013, eventually winning the 2013 NLCS MVP in the playoffs in his rookie season. After averaging a 3.12 ERA during his first three seasons of his career, Wacha has pitched to a 4.30 ERA over his last four seasons. His walk rate (BB/9) has increased every year of his career- going from 2.64 his rookie season to 3.91 last season. There is a lot not to like. Wacha’s skills have been in an obvious decline in the last few seasons, but that doesn’t stop the Mets.

Wacha is a depth piece for the Mets in 2020, as without an injury to their rotation, Wacha doesn’t have a spot. The Mets will probably throw Wacha in their bullpen next season if the starting rotation performs as expected. Wacha can be most valuable to the Mets next season if he pitches well in long relief out of the bullpen. There is a long history of talented starters who convert to the pen and dominate- Wacha feels like a prime candidate to turn into an elite relief pitcher.

The Mets had the worst bullpen ERA in franchise history last season, so if Wacha can be a useful piece in relief than that will be huge for the team’s success. Considering they haven’t brought in any new bullpen pieces for 2020 yet, Wacha might be the only new face next season.

Replacing Zack Wheeler and Jason Vargas from the 2019 rotation with Marcus Stroman and Rick Porcello/Michael Wacha for 2020 doesn’t actually make the Mets better. In fact, the team is much worse. The Mets are going to leave this offseason with the rotation downgraded at a time when they have invested a lot of their future into winning right now.

If the Mets were actually serious about locking down a playoff spot they would have been in on the Gerrit Cole/Stephen Strasburg/Zack Wheeler tier to fill out a potentially absurd and dominant rotation. Instead, we have reclamation projects that may return to form but are mostly huge question marks going into 2020.

It is frustrating to see Zack Wheeler sign a contract worth $23.6 annually and Madison Bumgarner sign a contract with the Diamondbacks worth $17 million annually while the Mets paid $13 million to acquire two starters who are so much worse. Corey Kluber was acquired by the Texas Rangers for only a 4th outfielder and a 21-year old relief pitcher and is only making $17.5 million.

The Mets should have been able to afford one of these elite pitchers for their reasonable price tag but instead took the cheap route. Bumgarner and Kluber are paid only $4 million dollars more than what they paid for both Wacha and Porcello. It is horrible roster construction to prefer Porcello and Wacha over an elite pitcher who is only making a couple of million dollars more than the two.

The Mets can try to dumpster-dive their way into the playoffs without acquiring elite talent, but for a team that won 86 games and missed the playoffs, their strategy isn’t convincing anyone that they will finish better than third place in the NL East next year. They’ve replaced their homegrown stud with two lesser options to fill one spot- which makes their biggest strength (the rotation) receive a huge downgrade from last season.

While the Mets may boast about their starting pitching depth, they don’t actually improve because of it. It is always better to have one option you can trust (Wheeler) instead of two options you don’t. Run for the hills, Mets fans, 2020 might get ugly.