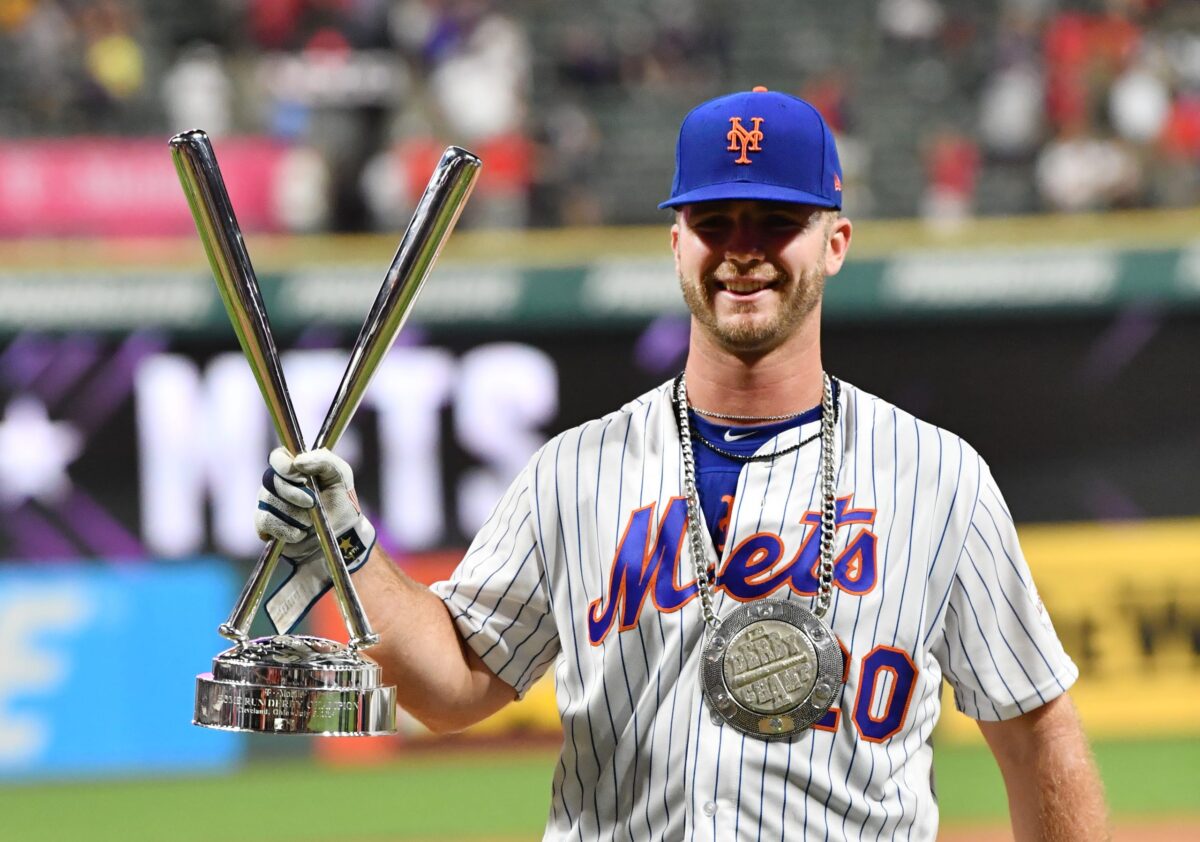 The Home Run Derby champion repeats after a remarkable display of power and after outdueling some of the league’s best longball hitters.

The Home Run Derby is one of baseball’s most entertaining and astonishing nights all season long. The shortened 2020 MLB season did not include an All-Star break, thereby canceling the derby. In 2019, we saw two power-hitting rookies battle it out for the trophy, but Pete Alonso was able to beat out Vladimir Guerrero Jr. So, with the derby returning in 2021, Alonso was adamant about defending his title. Here’s what he had to go up against.

Despite being the reigning champion, Alonso was an underdog from the beginning. The big favorite was baseball’s most exciting watch in Shohei Ohtani. Shohei did have a tough matchup though in Juan Soto, who may be struggling thus far, but still has explosive power. So much so that Soto actually hit the furthest ball measuring in it at towering 520 feet. Baseball’s leading home run hitter held his own against Soto though as two tie-breaking rounds were needed.

After five total minutes of swinging, the two had matched each other on 28 home runs. Therefore, a swing off was needed. Each player could take as many pitches as need be but was only given three swings. Soto went first and put the pressure on the Japanese star by hitting all three of his into the stands. Unfortunately, the first big narrative was cut off when Ohtani was unable to match Soto, ending Ohtani’s derby campaign.

Being the lower seed, Pete Alonso was able to go first and set the bar against Salvador Pérez. Set the bar he did as he destroyed an incredible 35 homeruns in four minutes. The slugging display put on by Alonso was simply unparalleled in the derby. Pérez did his best to contend with the reigning champ but was only able to hit 28 long balls. This feat would have beaten everyone else in the field, but unfortunately, Pérez had to face the polar bear.

This appeared to be an intriguing matchup. Gallo is notorious for his moonshot homeruns traveling over 480 feet, but Story was in his home stadium. The hometown hero backing provided a clear benefit as the crowd rallied around Story during his round. However, the real defying variable was Gallo’s struggles. As much as his swing seems like it would be a perfect fit for a derby, Gallo simply could not get in the swing of things. A late push by Gallo granted him 19 long balls, but Story was easily able to surpass that mark and move onto the next round.

The first of the hitters to go was Oakland’s Matt Olson and Baltimore’s Trey Mancini. For Mancini, reaching this point though was already an impressive feat. 2020 was a very trying year for most, but for Mancini, it was a true battle after getting diagnosed with stage three colon cancer in April. Mancini would then sit out the entirety of the 2020 MLB season and truthfully had no thoughts of returning to the game. His sole focus was battling and overcoming cancer.

After months of chemotherapy, which at one point he had allergic reactions to, Mancini was finally cancer-free in November of 2020. His focus then shifted back to baseball, but it would be a long journey to get back into shape. After a year away from the game, Mancini made his return this year and has been very impressive too. So much so that Major League Baseball invited him to participate in the home run derby.

Nobody in Colorado held anything against Olson, but the fans were clearly behind Mancini. Both opened the gates to a slow start, but by the end, they had put the home run derby on a good opening path. Olson ended very strong and hit 23 dingers, but Mancini was able to barely squeak him out before the buzzer and pull out the upset.

Second Round of the Home Run Derby

In the second round, the time frame for hitting was reduced. This meant fewer home runs, but more reachable totals. With Ohtani out, we did not see the big four of narratives face off. However, the hometown hero and comeback player of the year did matchup. Mancini had been waiting on the sidelines for some time, but still had enough energy in the tank to rack up thirteen big flies.

The big takeaway from the second round though was Pete Alonso’s utmost confidence. Bobbing his head up and down as if he had music in his ears, Alonso was on a mission to remain the home run derby champion. He eased his way through the second round, but not before calling a timeout solely to hype up a deflated crowd.

Back-to-Back Champion or Comeback Player Comes Out On Top?

Mancini wanted to at least challenge the reigning champ. After putting him nine more home runs than the previous round, it had seemed like he had done so. However, Alonso simply proved himself as the home run champ. The ease at which he hit these balls well beyond 475 feet was crazy. It truly was not fair.

Swing after swing, Alonso was depositing balls deep into the left-field bleachers. Alonso surpassed Mancini’s 22 home runs total without even needing his extra time. Alonso put on a show and completed his title defense to become only the third player in home run derby history to go back-to-back.

Despite Ohtani not making a deep run, nor Trevor Story protecting his home field advantage, the night was extremely entertaining. We saw a handful of nail-biting rounds, an abundance of 500+ feet dingers, and Pete Alonso repeat as the home run derby champion. However, nothing really matched up to the return of Trey Mancini to the biggest stage.

His awe-inspiring story just goes to show the incredible things people can do after battling cancer and enduring chemotherapy. And that has always been Mancini’s mission since making his professional sports return. To learn more about Trey Mancini’s remarkable heartening comeback story, I would really recommend checking out ESPN’s cover story on his improbable return to baseball.