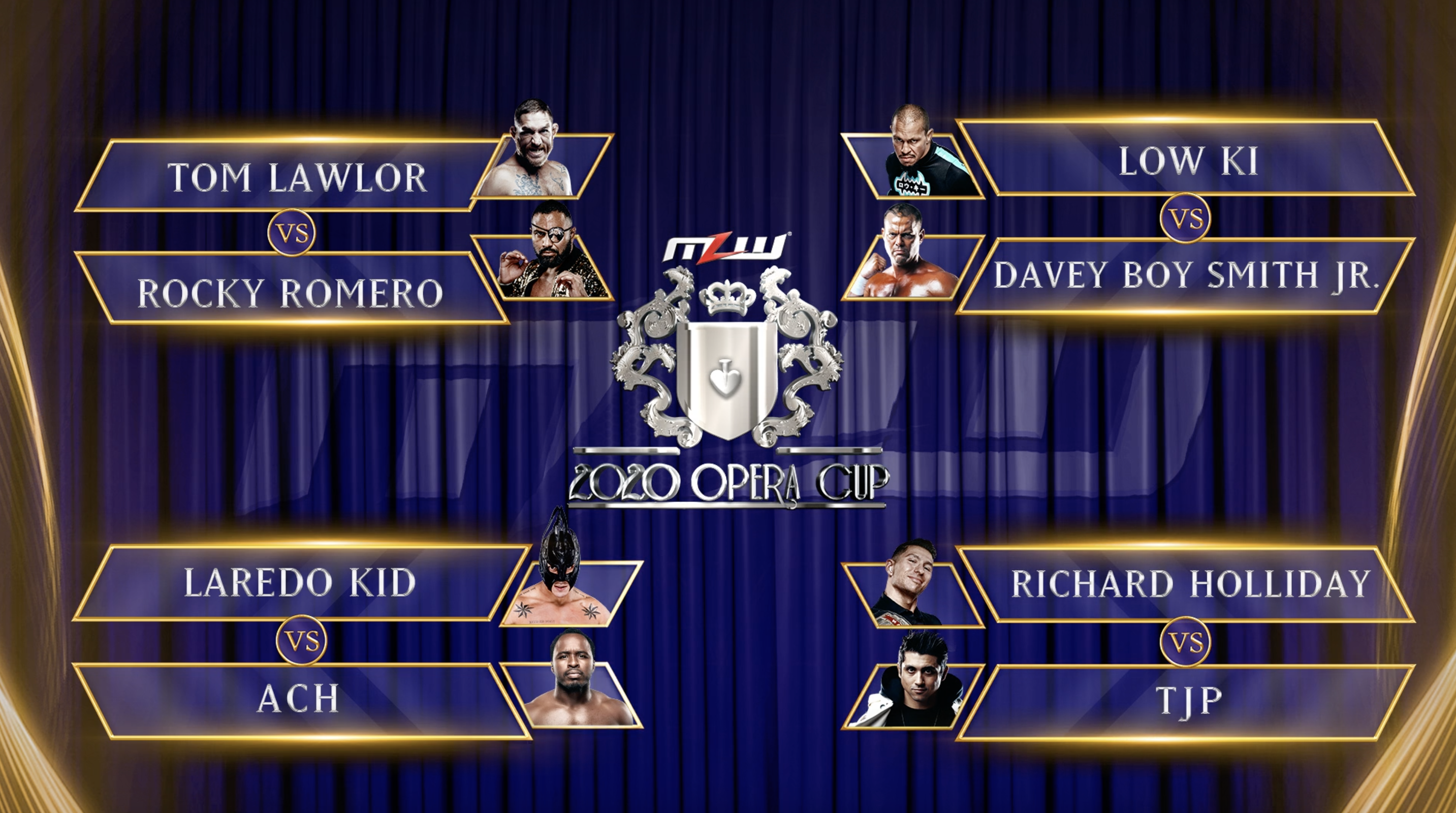 The 2020 Opera Cup promises to be bigger in scale as promotions from Mexico and Japan participate in the annual tournament, which dates back to the turn of the century.  The opening round kicks off as the classic tournament gets underway featuring two bouts on FUSION.

In other opening round action, the self-proclaimed IWA Caribbean Heavyweight Champion Richard Holliday will compete against TJP.  This marks the second consecutive year both athletes competed for the coveted cup.

In the proceeding weeks, stage 2 of the Opera Cup opening round will see the defending 2019 Opera Cup winner Davey Boy Smith Jr. fight Low Ki in a rematch of their superb encounter in last year’s tournament.

Representing Mexico’s AAA Lucha Libre organization, AAA Cruiserweight Champion Laredo Kid looks to bring the cup home to Mexico. In order to do so, he’ll have to advance past the extraordinary athleticism and power of Texas’ ACH.

The best of the day competed in the tournament and would often be an entree to more success, including the World Heavyweight Championship of the day.

After a 71 year hiatus, the Opera Cup returned in 2019. Soon thereafter, the league confirmed the “classic” would be an annual tournament hosted exclusively by MLW.

Inspired by the legends whose names are immortalized in plaques on the sides of the cup, including: George Hackenschmidt, Stu Hart, Leo Pardello, William Muldoon and Waldek Zbyszko, “the classic” has returned to reignite the spirit of the greats who preceded today and tomorrow’s greats.

Over the summer of 2019, Major League Wrestling entrusted the same craftsmen who have worked with the NHL on maintaining the Stanley Cup to complete the restoration process of the original cup in time for the return of the tournament.

The Professional Wrestling Opera Cup is dedicated to the great men who have fought valiantly before us to ensure our passion, professional wrestling, be cemented and respected in the annals of time.

MLW invites you to join us as we celebrate the sport’s oldest tournament as it returns this Wednesday November 25 on MLW FUSION at 7pm ET on YouTube, Fubo Sports and Pluto TV. Fans can also watch nationwide on cable and dish via beIN SPORTS on Saturday nights at 10pm ET and on demand anytime, anywhere on DAZN. Learn more about where to watch.