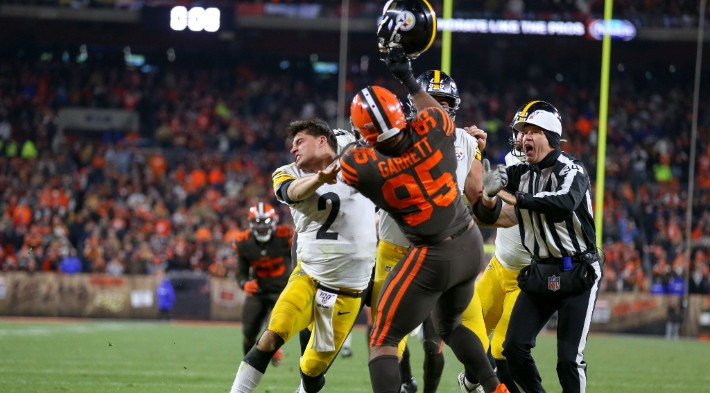 It’s been about a week since we saw the Cleveland Browns’ Myles Garrett and the Pittsburgh Steelers’ Mason Rudolph get into it on the gridiron. What stemmed from what could’ve been considered a “roughing the passer” hit, turned into a full-on brawl where Garrett ripped Rudolph’s helmet off and hit him with it. After the fight, Garrett got suspended indefinitely, meaning he is out for the remainder of the season and any playoff game the Browns may be in, as well as potential games next season. Rudolph only got a fine for his involvement but no suspension. The question is, is Garrett’s punishment a bit too severe?

Garrett should very well be facing a punishment, but considering he wasn’t the only one involved in the fight, he shouldn’t be suspended indefinitely. The athletes who step out onto the field every Sunday are passionate about the game they play, they’re competitive and can even be tempermental. Players are constantly seen chirping at one another and getting in each other’s faces week after week, so it is no surprise Garrett got hot-headed, as did Rudolph.

With video review of the fight, it almost seems as Rudolph was the instigator, who appeared to be trying to kick Garrett in the groin while the two were on the ground, then tried to rip off his helmet to no avail.

Unfortunately, after losing his appeal Garrett will have to serve his indefinite suspension, while Rudolph simply pays his fine and continues playing. Just like with referees, there is no way to make sure that the NFL gets these types of cases 100% correct, but maybe this particular incident will lead to a deeper investigation before serving punishments to players.