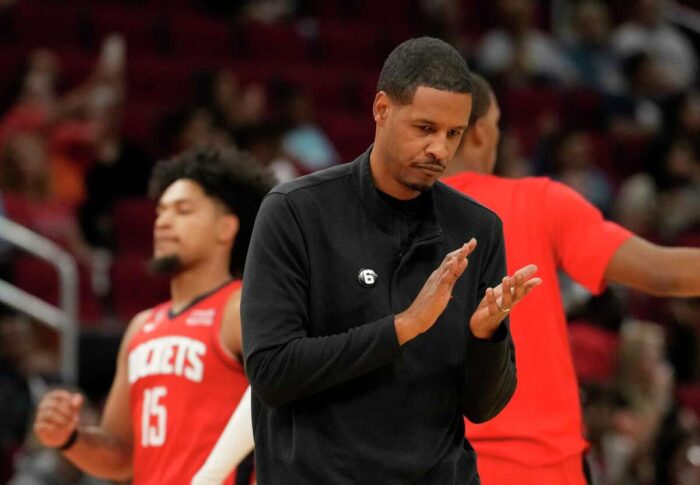 This season’s media day for the Houston Rockets gave us more hope than any season prior in this grueling rebuilding process. Drafting another top five pick, improvement from Jalen Green, and extensions from Kevin Porter Jr. and Jae’Sean Tate. All smiles went around coach Stephen Silas, general manager Rafael Stone and the young players. Everybody in the interviewing room appeared confident that they would show signs of improvement during their current rebuild season.

Well, it’s been nearly halfway into the season. Has it worked?

The Houston Rockets are dead last in the NBA standings with a 10-30 record. They’ve lost seven straight games along with nine straight losses on their home floor. Many supportive fans are disappointed in their overall performance mainly because they are equally as bad if not worse than last season. In a rebuild, there needs to be signs of improvement year after year. This allows the general manager of a team to decide whether or not to find the right time to go for a playoff spot or spend yet another year in the draft lottery.

On the bright side, Houston favorite Jae’Sean Tate has finally returned from injury and has made the most of his minutes in his first game, scoring 11 points with 5-8 from the field in 19 minutes against the Utah Jazz. His next game wasn’t as solid, turning over the ball three times as he only scored 3 points going 1-6 in 18 minutes.

Houston also has the highest odds at 13.4% to draft players with phenomenal talent such as Victor Wembanyama and Scoot Henderson at the 2023 NBA draft. It’s understandable to make sure you have the best odds at drafting the best players, but at what cost? Houston is in it’s third year of rebuilding and they have two top three draft picks in Jabari Smith and Jalen Green. How many more grueling seasons will this take to understand that rebuilds need progression?

Eric Gordon said it in a straightforward way following another putrid loss on the status of the team. A reporter asked Gordon if the current team has improved from years past: Gordon replied quickly, saying “There’s no improvement.” Coach Stephen Silas chimed in as well after the loss, saying that “rebuilds are hard” with an awkward chuckle at the end. Silas appeared annoyed with the “impatience” of the reporters and fans regarding the status of his team.

Then, after losing a couple more games, Silas made it known he will turn the team around before the All-Star break. This was before the Rockets blew a 20 point lead against the Minnesota Timberwolves and got outscored 66-38 in the second half, earning yet another loss on their disappointing record.

What is needed at this point in the season for Houston? On paper, they’re supposed to be trending in the right direction. A young core is forming and they’ve got a quality veteran in Eric Gordon. Of course there’s no playoff bound by any means, but when you take a look at the fellow rebuilding teams such as the Oklahoma City Thunder and Orlando Magic, they’ve gotten better year after year.

At 10-30, Houston is worse than last year. Besides Jalen Green, there’s hardly any sort of player improvement for Houston. When you draft a top five pick, chances are you integrate them regularly in the offense that optimizes their athletic abilities. For Jabari Smith, that’s quality open jumpers, rim protection, and defensive stops.

Smith is also very capable of switching to every position, however, there is a lack of experience and he needs to be more consistent. This is when good coaching steps in. Unfortunately, Stephen Silas isn’t that. Since he was signed as the Rockets coach in the 2020-2021 season, there hasn’t been any improvements to the team.

Necessity for A New Direction

Rockets fans understood the initial hardships that were laid on his plate early on, but this is the third season in a rebuild. There’s been too many chances given to Silas to be the coach that carries them back to relevancy. He hasn’t been able to prove his worth and coaching to the team. It’s very likely Jabari would flourish as a player if he was on a different system.

Silas’ rotations don’t make sense. Eric Gordon is a starter, which takes away playing time from players who need it. Additionally, the pieces surrounding Green don’t exactly fit. Kevin Porter is a scorer but used as a facilitator in attempt to get Green or Smith open. In reality, he is playing one on ones and isn’t getting the team involved as much as he should. Sengun’s basketball IQ has insane potential, yet the bulk of his plays are screen and rolls. It’s rare to see him post up or make plays at half-court.

Don’t get me wrong, this is a talented team. They have all the potential to become the face of the Houston Rockets. Nevertheless, the execution isn’t there. If Houston continues down this slope of dreadful mediocrity, then Rafael Stone needs to consider firing Silas and implement a new coaching system.