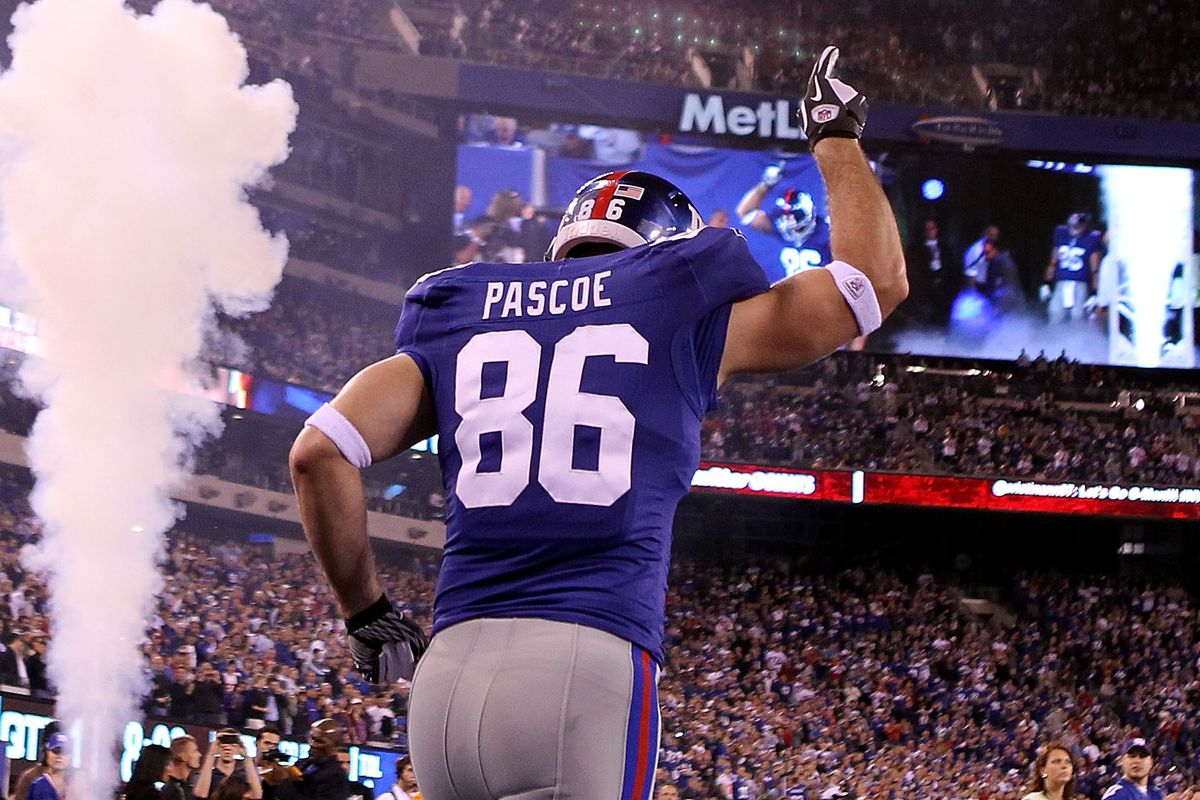 Since he entered the league in 2009, tight end Bear Pascoe has withstood the testament of what it takes to be a reliable NFL player. His balanced footwork, resilient approach, and dependable receiving ability have made him a solid option in the New York Giants offense.

Pascoe was originally drafted by the San Francisco 49ers but ultimately signed with the New York Giants in the latter part of the 2009 season. Coming out of Fresno State, Pascoe tied the record for most touchdown receptions in a game in 2007, and also held the school record for most field goal blocks in a career.

Though he has been heavily involved with athletics since childhood, Pascoe also finds the time to provide valuable contributions to his surrounding communities.

“There are two charities that are very dear to my wife and I, the Wounded Warrior Project in New York City and Teammates For Kids,” says Pascoe. “Teammates For Kids is actually a charity started by Garth Brooks and Troy Aikman. They do so  much for so many kids.”

Teammates for Kids is a multi-tiered charity launched in 1999 with the goal of offering all kids around the world an even start. The charity focuses on helping children in the areas of health, education, and inner-city outreach, from funding Child Life Zones for pediatric hospital patients, to raising money for youth sports leagues, to paying for complicated facial and dental surgeries.

“ My wife, and I are involved  an organization called “SAY i WON’T”. This was established by my friend Brent. It falls in line with a lot of what our wounded warriors are going through when they’re coming back from overseas,” explains Pascoe. “The organization helps veterans try to acclimate themselves back into normal life.”

“We just released Bear Pascoe “SAY i WON’T” t-shirts, and the proceeds will go back to those charities,” says Pascoe. “I think it’s very important to give back. I’ve been very blessed, I have an amazing wife, and I’m able to play a sport that I love. Any chance that I can give back to the communities of which I am a part, whether it is here, on the east coast or back home in California, I try to take advantage of every chance I get to give back to the communities.”

Growing up in a small town, Pascoe understood the importance of being in a community where role models were a necessity. Born and raised in Porterville, CA, Pascoe was recognized with great athletic ability, and was recruited by Fresno State coming out of high school.

“I’ve had a positive effect on kids back home, because I grew up in a small town,” said Pascoe. “To make it to this level and living out my dream, I hear from a lot of kids back home that it gives them hope to live out their dreams some day. They can make it to college, go on to sports, or be whatever they want.”

Pascoe caught his first career touchdown pass in the 2011-2012 NFC Championship Game against the San Francisco 49ers, the team who drafted and cut him. Rich Eisen, a television journalist known for his work on ESPN and the NFL Network, referenced the play by comparing Pascoe with Patriots star tight end Rob Gronkowski.

The New York Giants went onto win that game and advance to face the New England Patriots in Super Bowl XLVI. Pascoe, who was mostly used as a blocking tight end, caught 4 passes for 33 yards, helping the Giants defeat the Patriots, 21-17.

“It’s great to have goals, but young athletes should have fun and enjoy whatever your sport may be,” Pascoe says. “Have fun and work hard. Enjoy the ride, because it is fun.”

Since 2011, Pascoe has continued to be a reliable contributor for the Giants, on and off the field. Over the past four years, the Giants have seen a handful of talented tight ends transition through their system, including Kevin Boss, Jake Ballard, Travis Beckum, and Martellus Bennett. None of those players have remained quite as long as Pascoe.

This year, Pascoe will welcome Brandon Myers into the organization as the Giants next go-to tight end. Coming off of a career year with the Oakland Raiders, Myers will try to fill a position that has been left in flux since the departure of Jeremy Shockey in 2008. Pascoe will serve as the backup tight end and fullback this season.

“I think where I’m at in my career I need to keep improving by working on my footwork in the run game and being able to run routes,” said Pascoe.

New York Giants Star Victor Cruz Setting The Bar Even Higher in 2013
Charlie Weis: Leader On and Off The Field!