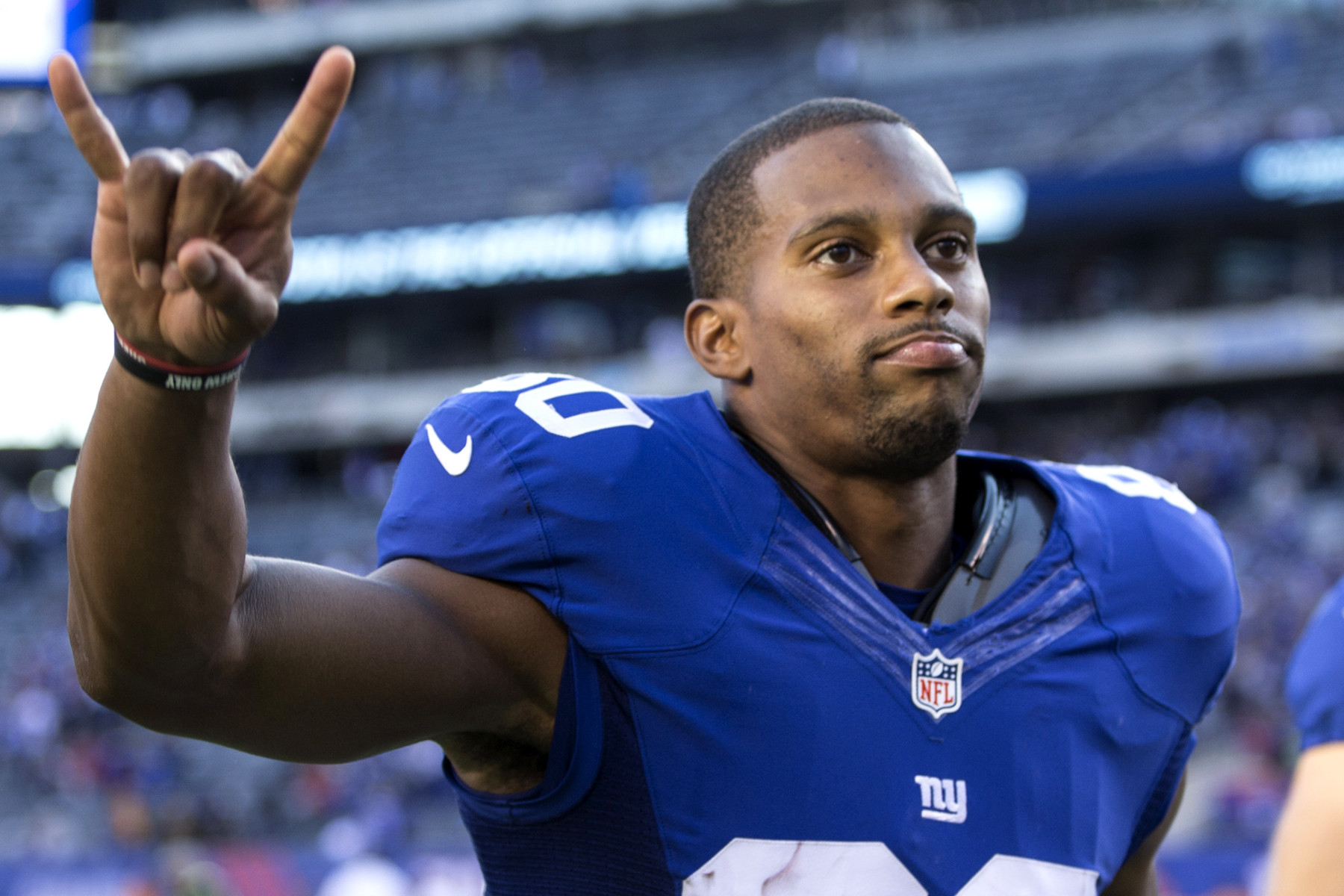 Even before he began salsa dancing his way across NFL end zones, Victor Cruz was formulating a plan of success.

The surprise story of the 2011 NFL season is well documented. Cruz flew under the radar of every team around the league before signing with the New York Giants as an undrafted free agent in 2010. In his first preseason game, Cruz torched the New York Jets for 145 yards and 3 touchdowns. He led all wide receivers that preseason in yardage and touchdowns. However, a hamstring injury before the start of the season slowed down the transition into stardom.

Pick back up in 2011 when the Giants lose receiver Steve Smith to free agency, and only Hakeem Nicks was considered a reliable wide out. Cruz entered the season as Eli Manning’s 4th target on the depth chart, but injuries to Mario Manningham and Dominick Hixon propelled him into a larger offensive role. That year, Cruz broke the single-season Giants record for receiving yards, and was named Second-team All-Pro by the Associated Press. Oh yeah, he won Super Bowl XLVI that season, too.

“I always played with that chip on my shoulder for not being drafted,” said Cruz. “I felt like I was good enough and that I had done enough. Don’t let anyone ever tell you no, that you can’t do something or that you’re too small. That doesn’t matter, it’s all about how you apply yourself and the talent that is exuded on the field or wherever. I think that was the biggest thing for me, obviously a little bit of luck plays into it because you have to be in the right place at the right time, but I feel like I just took advantage of the opportunity and ran with it.”

After winning Super Bowl XLVI, the New York Giants were treated to a ticker-tape parade in Manhattan, presented the keys to the city, and then honored in a ceremony at MetLife Stadium in New Jersey. Nearly one million fans attended the Giants’ second ticker-tape parade in five years, as they threw footballs from the sidewalks to the players, who signed them and threw them right back.

“That was fun for me,” said Cruz. “Growing up in Paterson, I was little going to the Puerto Rican Day parade, the African Heritage parade, all of these parades. But to have your own parade coming down your own city, just for you, it was fun. I was looking out in the crowd, I’m seeing everybody dancing and a ton of people I knew, it was just an awesome feeling. Hopefully we can win it again at some point throughout my career so we can have another one.”

In 2012, Cruz picked up where he left off the previous season leading the Giants in receiving yards and touchdowns. In his short career, Cruz has shown the work ethic and perseverance that marks sustained success in the NFL. He is as smooth answering questions from reporters in the locker room as he is running routes on the field. His teammates love his fearlessness and football intelligence. In addition, his presence off the football field is as electrifying as it is on.

“Naturally, it is overwhelming. Everything is going to be looked at as an example, whether it’s positive or negative,” says Cruz. “It’s something I take pride in, and I just want to continue to be that way and be a role model for the kids. If I continue to do the right thing, I’ll be in good shape.”

This past season, the world was shook by a crime of desperation at Sandy Hook Elementary School in Connecticut that took the lives of 20 children, including 6-year old Jack Pinto. Pinto was a Giants fan who called Cruz his favorite player. The wideout visited the family for more than three hours, one day after Jack was laid to rest wearing a Victor Cruz jersey. Cruz wrote “Jack Pinto” and “My Hero” on his cleats during a 2012 game against the Atlanta Falcons. A classy gesture by Cruz, who understands his presence can lift a community in unthinkably trying times.

“It was tough for me personally because that was the first time that I actually had to deal with something like that,” said Cruz. “Someone passes away at such a young age, and he was a fan of myself. I see the family in there, and they want to smile, but you could see in the back of their mind behind that smile there was a subtle sadness that couldn’t be erased. It was a horrible feeling, but I was happy that for those three hours that I was there because I could be the reason that they smiled and the reason they could look forward to the next day.”

In addition to his off-the-field charisma, Cruz recently launched a foundation to help boast the STEM Program, which works to support teachers and students at the U. S. Department of Education and the National Science Foundation. The foundation focuses on teaching children resiliency, commitment and perseverance as essential skills to achieving their goals. On and off the field, Team Vic helps children understand that a healthy mind and body will maximize their potential and allow them to realize a better future.

“The Victor Cruz Foundation has been established,” says Cruz. “It’s going to be geared towards STEM program, which is Science Technology Education and Math. If kids can get as excited about football as they are about science and technology, then I’ve proven my goal. We’re going to start intercity, like Paterson and places where I grew up, and then spread it across the nation. I think charitable foundations are a good way to give back to the community and give some of yourself back to the people. People around here don’t get a chance to see you on a face to face level. They see you on TV, but they don’t get time to spend time and talk to you, and I always wanted to be that player that someone could feel like they could talk to or approach.”

When Cruz is not seen in the Giants locker room, helping out children in need, or dancing his way across your television, he can found working on his clothing line called Young Whales. In the summer of 2010, Cruz and fellow Giants rookie Nate Collins (now with the Chicago Bears) bonded over their passion for fashion. They did some research, and by April they had started a company with initial investments of $5,000 each. By September of 2010, the duo designed their first line of clothes and were ready to sell online. The line’s name plays on the term “whale” being a high-stakes casino gambler.

“Young Whales is a clothing line that I designed between myself and Nate Collins,” said Cruz. “We are joint partners in that brand, and we sell shirts, sweaters hoodies, hats for male and females. It’s doing well, it’s going into the fourth year. It’s really grown since we started, and it’s one of my hobbies off the field.”

This past offseason, the New York Giants and Cruz agreed on a 6-year deal worth more than $48 million. Most importantly, Cruz receives long-term financial security that is hard to find for an undrafted player who mainly lines up in the slot. The Giants have done a nice job surrounding quarterback Eli Manning with top-shelf talent, and although Cruz was missed early on in camp, he is staying put in New York.

“I love these guys and hanging around with them,” said Cruz. “That whole camaraderie is what I missed. Obviously the business aspect is going to take care of itself, but I missed not being able to see the guys in the locker room and on the practice field.”

The New York Giants open their 2013 season against the Dallas Cowboys on Sunday night September 8th at 8:30 PM EST.