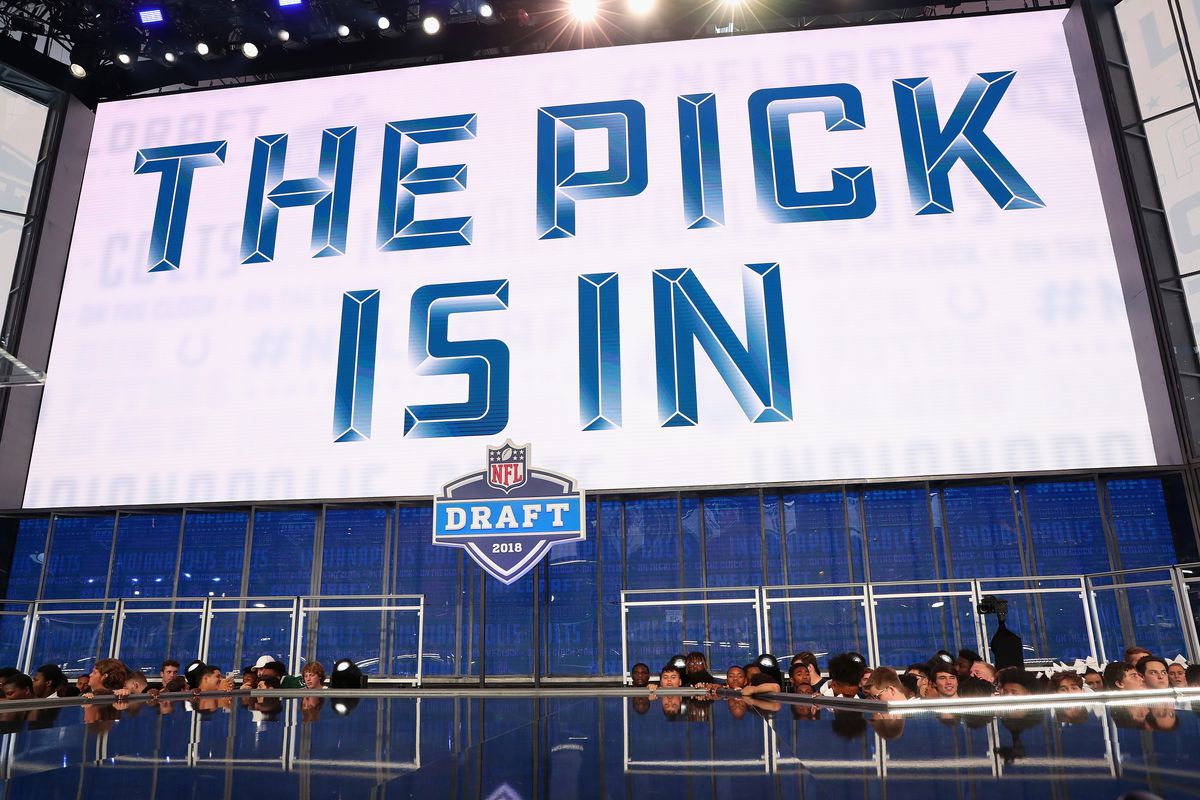 It’s been a crazy NFL Offseason, but now we’re a little less than a week away from the 2022 NFL Draft! This draft class is loaded with talent on both sides of the ball as teams look to improve their roster for the 2022 NFL Season. Here is my mock draft for this year, now I won’t do any trades for picks so this is just for the order it is in now.

The Jaguars need help on both sides of the line of scrimmage. Aidan Hutchinson is the best player in the draft, but I don’t think there is a for sure number one pick this year. There is still Trevor Lawrence at Quarterback and protecting Lawrence must be a priority as well. I think Neal is a safe pick at 1. If Jacksonville doesn’t go with Hutchinson Jacksonville will go OL.

If Jacksonville decides not to go with Hutchinson the Lions are turning in this card immediately. The Michigan man stays in the state and works to improve the Lions defensive line. Hutchinson’s motor is unquestioned, and has a nice mixture of speed and power.

Walker’s stock has been rising since the offseason has started. Walker had a great showing at the combine which is why he has been rising on many people’s boards. Walker can line up inside or on the edge. His numbers may not be that impressive from playing on that very talented defense at Georgia, but his combine performance shows that he can be a special player.

The Jets use one of their first-round picks on Sauce Gardner. On my board Kayvon Thibodeaux is still there, and if he doesn’t go in the top three I wouldn’t be surprised if the Jets took him as an edge rusher. However, I like Gardner here at 4 he’s the best corner in the draft. He’s physical, has long arms, and doesn’t mind engaging himself in the run game.

The Giants also have two top-10 picks, and I feel that they can get their offensive lineman that they need and an edge rusher. New York takes Ekwonu first to help that abysmal offensive line. He’s very mobile and is well-balanced. I believe Ekwonu can be plugged in right away on the offensive line for the Giants.

This is the territory where Quarterback starts to creep in as a pick in the draft. Carolina does need to solve that issue, but I don’t think any of the quarterbacks are a top-10 pick. Just like the Giants, the Panthers offensive line is in shambles. Cross has long arms, and good core strength. No matter who is the Quarterback in Carolina—that offensive line must get fixed.

Thibodeaux has been up and down all over people’s board, mainly due to so many different team’s opinions on him. I just can’t see him falling out of the top-10, he has a quick first step, and strong hands plus he’s very athletic, but the knock on him is if he “loves” the game enough and how often he disappears for stretches.

The Falcons were in the market for a Quarterback after the Matt Ryan trade, but the signing of Marcus Mariota knocked that down just a little. Malik Willis could still be in play, but the Wide Receiver room in Atlanta is starless and unproven. There will be no Calvin Ridley this year (or maybe ever in Atlanta) and Wilson gives the Falcons what they need at the Wide Receiver position.

Stingley only played in three games last season, but had a dominant 2019 campaign as a freshman and practiced against some of the best Wide receivers in the league now. Willis is also in consideration here as well, but I like Stingley here just because of Seattle’s history of having that long rangy cornerbacks that they like.

The Jets spend their second first-round pick to help Zach Wilson with taking Drake London. New York has Corey Davis who has nice size, but is not looked at as a serious red zone threat. Standing at 6-foot-5 London gives a huge target for Wilson to have at the Wide receiver spot.

Hamilton shouldn’t fall out of the top-10, but his 40-yard dash at his pro day wasn’t as stellar as it was at the NFL Combine. However, Hamilton plays faster than the 4.7 he ran at his pro day. He can play in the box and can cover in space as well.

The Vikings still have Patrick Peterson for another year, and could use another cornerback. Maybe a bit high but the zone-heavy CB with high-level quicks and good closing speed on the football.

Houston needs a pass rusher on one of their two first-round picks. If they don’t go for it at 3, they’ll probably do it at 13. Johnson is tall, long, and active with a nasty one-arm bull rush.

Davis is super athletic, quick and strong for his size. He would probably always need a double team on him. Baltimore needs some help on the defensive line mainly on the interior. Davis is for sure of those guys.

It seems like every year the Eagles are looking for THE wide receiver and they’ve missed. I don’t think they let this one slip away as they take Jameson Williams at 15. Reports are out that Williams is ahead of schedule, and is shooting up the draft board.

New Orleans gets a possible replacement for Terron Armstead in Trevor Penning. Penning is the definition of the “big nasties” at 330 pounds and being super athletic for his size.

The Chargers could go Guard or Tackle in this instance because that is where most of the help is needed. Kenyon Green could be the guy at 17. Green can play outside or inside and played against some of the best defensive lineman in the SEC. Penning is in play here if New Orleans doesn’t take him at 16.

If Stingley Jr. somehow falls to one the two picks the Eagles have they should jump on him. In this mock I have he is gone already so Philly takes the next best corner.

Burks has a great combination of size and speed. He can bully smaller DBs, and is amazing at gaining the YAC.

The first Quarterback is finally off the board! Pittsburgh could go with the hometown guy in Kenny Pickett. However, I think that the Steelers like Willis a little bit more than Pickett.

J.C. Jackson is now out west in LA with the Chargers, and the Patriots will need to upgrade their secondary. Booth has good size and length, a physical corner and is not afraid to play downhill in the run game.

With Devante Adams now in Las Vegas the Packers must address the Wide Receiver position immediately. Dotson has speed, speed, and more speed. Hopefully the Packers end a 20-year drought of not taking a Wide Receiver in the first round.

Karlaftis is a big strong edge rusher who has the NFL body of a defensive end already, and can get stronger and powerful overtime. The Cardinals can either fill a need or go with the best available. I have them trying to fill a need.

Johnson had a great week in Mobile for the Senior Bowl showing why he should be a first-round pick. Johnson also did some work at center and guard, so he’s versatile as well. He’s a physical run blocker and a solid pass protector as well.

The Bills are stuck with going for a need, and the best player available. Tre’Davious White is returning from a knee injury, and there isn’t any guarantee starter on the opposite side. Wouldn’t be surprised if Devin Lloyd lands here as well.

The AJ Brown saga is heating up in Nashville, and the Titans may have to look at that position for the draft. However, six of the top receivers are off the board. Tennessee could also take an offensive lineman, but they take the best available player here. Lloyd likes to play sideline to sideline, and is very physical. The Titans could improve their defensive even more.

If the Bucs can’t get Ndamukong Suh back Tampa should go with Wyatt at 27. Wyatt is a wide body who wins with power. The bull rush is good and has nice hand work.

A talent like Nakobe Dean cannot constantly get passed up like this. The Packers jump on Dean and add him to their linebacker corps. Dean is a smart and speedy linebacker who always plays fast.

Mafe is another Senior who had a great week at the Senior Bowl. Mafe is a dynamic pass-rusher, but will need to improve in the run game.

After the Tyreek Hill trade to Miami, the Chiefs have no deep threat at the Wide Receiver position. Watson gives the Chiefs that element again. The combination of size and speed, plus Watson has great body control and can get those 50/50 balls.

The Bengals must protect Joe Burrow at all cost. Cincinnati has made some changes on the offensive line, adding Linderbaum here late in the first round will be valuable.

Detroit ends the first round with taking a Quarterback as the future. I think it’s better to get a Quarterback at 32 than 2. Some experts may think that Pickett could be drafted from anywhere in the top-10 to the bottom of the first round. Desmond Ridder’s name is surfacing among Quarterbacks whose draft stock is rising. Pickett is a good athlete who can keep his eyes down the field. His arm isn’t the strongest, but his ball had both velocity and accuracy.