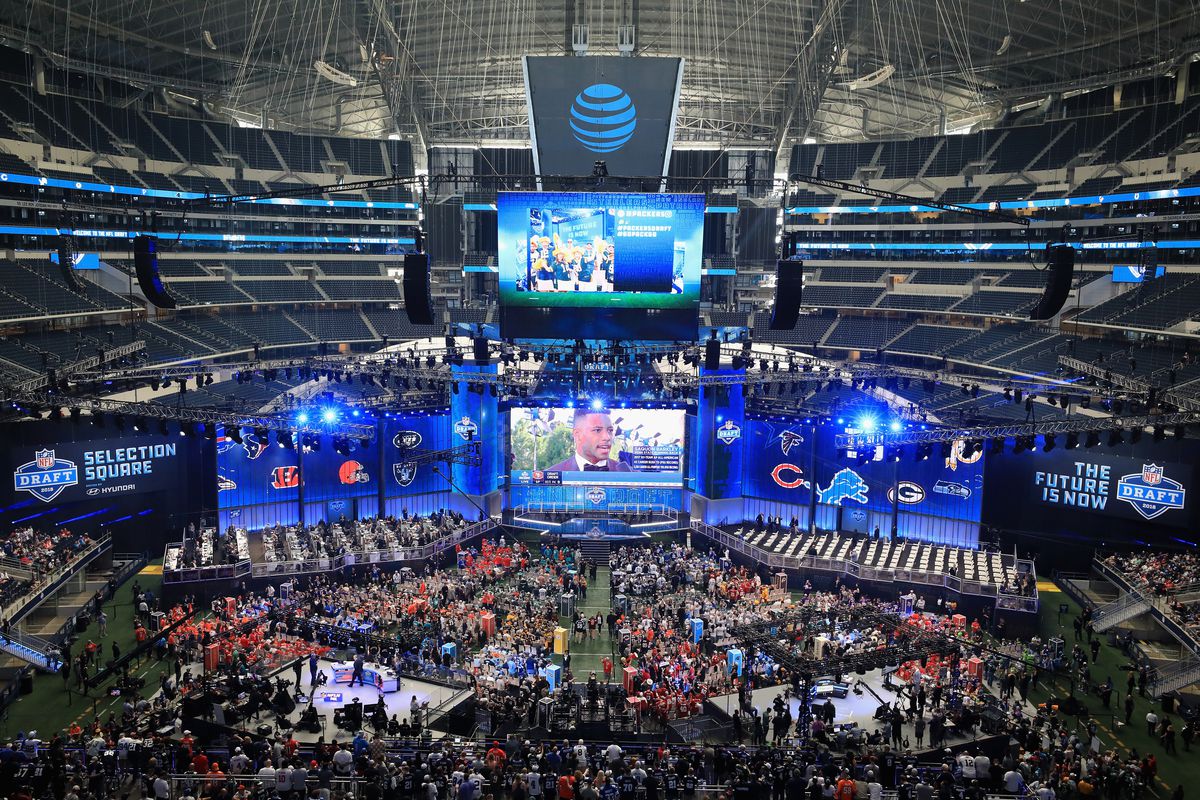 The Coronavirus has all but shut down professional sports, but on some level, the show must go on. For NFL fans, that means looking forward to the next scheduled event, the 2020 NFL Draft. With that, we present you my first mock draft.

Joe Burrow, QB, LSU – Coming off possibly the greatest season by a college QB, the Ohio kid comes home to be the future of the franchise.

Tua Tagovailoa, QB, Alabama – This pick could absolutely be Chase Young. But no one knows if Ron Rivera believes that Dwayne Haskins is the answer at QB. Rivera’s best seasons were when he had Cam Newton being able to improvise inside and outside the pocket, something Tua can do infinitely times better than Haskins. Something tells me they may look this way.

Jeffrey Okudah, CB, Ohio State – Another pick that could absolutely be Chase Young, but the whole mess that ended with Darius Slay being traded to Philadelphia left Detroit with a gaping hole at CB. Okudah is as highly ranked as anyone at the position has been over the past decade or so. So a major need fits along with value.

Chase Young, EDGE, Ohio State – The Giants should consider themselves the luckiest team in the league if Chase Young falls to them at #4. But I feel there is validity behind each of the top 3 that this could possibly happen. Young is a franchise defining DE. If you go by this year’s stats, you won’t be blown away. If you go by this year’s film, you’ll see constant double and triple teams, something you just can’t consistently do in the NFL. If Young isn’t here, look for the Giants to take an OT (Wills or Wirfs) or trade back to a team wanting to trade up for a QB.

Justin Herbert, QB, Oregon – This is who I think Miami will take, even if Tua is on the board. There’s too much smoke for there not to be fire regarding the rumors they aren’t sold on Tua. Herbert won’t have to start right away, and he can be eased in by Ryan Fitzpatrick. The arm and the athleticism are there. If he can become a better decision maker, he’ll be a 10+ year starter.

Jedrick Wills, OT, Alabama – The top ranked OT in my eyes lands in LA. I have a feeling that the Chargers will either trade up for a QB, or not draft one in the first couple rounds. Then they will be in full “Tank For Trevor” mode. What better way to prepare for your new starting QB than to have the cornerstone of the offensive line already in place? Wills was a Left Tackle, then moved to Right Tackle to protect Tua’s blindside. Versatility and dominance. That’s what you’re getting.

Derrick Brown, IDL, Auburn – Speaking of dominance. I’ve seen Brown as a top 2 or 3 player on many boards. He gives you Aaron Donald’s inside penetration with Ndamukong Suh’s size. Will be a force wherever he ends up.

Tristan Wirfs, OT, Iowa – Wirfs crushed the Scouting Combine with his combination of size and athleticism. The Cardinals traded for Hopkins, so they can focus on re-tooling their OL and not have to worry about drafting a WR this high.

Isaiah Simmons, LB, Clemson – The Jaguars take the defensive player who absolutely scorched the Combine. Linebacker size and strength with Safety agilities, he’s a true 3 down player in the middle of the field. Some mocks have had him going 3 or 4. This is possible, but his position drives down his value a tad for me.

Mekhi Becton, OT, Louisville – The Browns need a left tackle, to complete the bookends after signing Jack Conklin to play on the right side. Becton is a physical freak (6’7” 367 lbs) and ran a 5.10 40 yard dash. He’s definitely the most raw player of the 1st round tackles, but he offers possibly the most upside due to his physical traits.

Jerry Jeudy, WR, Alabama – I would not be shocked if the Jets take Andrew Thomas here, but their string of mid-level signings during free agency along the offensive line. So they lean towards their other big need: playmaker at Wide Receiver. Jeudy is as polished a route runner we’ve seen in a while. He’s not a speed burner, but he gets open with his precision in the open field and ability to release at the line of scrimmage.

CeeDee Lamb, WR, Oklahoma – Lamb is one of those guys that you just need to get the ball in his hands. He’s much faster when the ball is in his hand than when it’s in the QB’s hands. He has gamebreaking ability to take any pass to the house. He will become a household name in Las Vegas.

Henry Ruggs III, WR, Alabama – I think the Niners would love to see either Jeudy or Lamb fall to them at 13, but they’ll settle for the fastest guy in the draft. With Ruggs’ ability to take the top off a defense, and the Niners love for the run game, it’s going to be difficult for defenses to focus on either aspect of the offense.

Andrew Thomas, OT, Georgia – I think it’s entirely possible that the Bucs trade up to secure one of the top 4 OT’s in this draft to protect their newest investment, Tom Brady. I don’t think I’ll ever get used to that. Thomas came into the season as the projected top OT in the draft, but a so-so season and a rise from the other 3 have left him at 4 on most boards. Still, a very solid player that can start for years.

Kristian Fulton, CB, LSU – I’m still a much bigger believer in Fulton than some are. Fulton was asked to cover Henry Ruggs in single coverage this year so they could double Jeudy. Fulton shut down Ruggs. He was rated top 5 in single coverage, cover 0, and cover 1 over the last 2 years. That’s enough for me.

K’Lavon Chaisson, EDGE, LSU – The Falcons let Vic Beasley walk and they try and replace him with someone who comps out to his skill set very nicely. He was dominant in the College Football Playoff and shot up the boards because of it.

C.J. Henderson, CB, Florida – The Cowboys got hit hard when they lost Byron Jones in free agency. The rebuilding of the secondary begins with the physical Gator.

Josh Jones, OT, Houston – The Dolphins drafted their franchise QB at 5 and now they take who they hope to be their franchise LT at 18. Jones is quietly creeping up a lot of boards. Originally believed to be a 2nd rounder, eyes are opening up to his consistent play.

Javon Kinlaw, IDL, South Carolina – Kinlaw could very easily be off the board by this pick. He was the best player during the week of the Senior Bowl. He was able to play the way he wants to play and showed how dominant he can be.

Xavier McKinney, S, Alabama – The retooling of the Jags defense continues with McKinney, the top Safety in the draft. Gladney wouldn’t shock me as they do have a hole along the whole secondary.

Justin Jefferson, WR, LSU – The Eagles’ 2 biggest holes coming into free agency were Cornerback and Wide Receiver. After they missed out on Byron Jones, they landed Darius Slay in a trade and paid him handsomely. They still need to fill multiple needs at wide receiver. They begin with the wide out who made the most impact on the College Football Playoff.

Jeff Gladney, CB, TCU – It wouldn’t shock me if the Vikings used some of the other picks they got from Buffalo to move up in the draft to take a higher ranked CB, but here, they take Gladney. But Gladney brings a physicality and confidence that will make him desirable. The other name that fits the positional need and value is Trevon Diggs, but that won’t happen after the recent bitter divorce between the team and his brother, Stefon.

Jordan Love, QB, Utah State – Some mocks that I read feel like they’re just forcing Love into the top of the draft because he’s a QB. And that just might happen. But I don’t see it happening without a trade, or the Chargers reaching heavily for him at 6. Here, the Pats hope he can develop the way Mahomes did in KC and become the next franchise QB.

Patrick Queen, LB, LSU – The do-it-all linebacker will find an immediate home in the middle of the New Orleans defense. I’ve been projecting a wide receiver here for a while now, but with the signing of Emmanuel Sanders, they may look a little later to add a piece there.

A.J. Epenesa, EDGE, Iowa – Epenesa surely didn’t help himself at the Scouting Combine with a poor athletic performance. But his tape speaks to the kind of player he can become. A great run defender on the edge with a good bull rush to get to the QB. I wouldn’t be shocked to see a WR picked here to serve as a replacement for Diggs.

Grant Delpit, S, LSU – Which Grant Delpit will show up to the NFL? The 2018 version who would have likely seen him land in the top 10 in the draft? Or the 2019 version who makes this pick seem like a bit of a reach? The Dolphins traded away a lynchpin of their defense last year in Minkah Fitzpatrick. Delpit will be the guy they look to fill those shoes.

Zack Baun, EDGE, Wisconsin – Versatile LB who has the ability to bulk up and play DE. Love everything about his game. Just a solid player who will find himself in the right spot.

Kenneth Murray, LB, Oklahoma – Murray just seems like a Raven Linebacker, very similar to CJ Moseley with better coverage skills. Injuries may be an issue with him in the NFL.

Ross Blacklock, IDL, TCU – My “Ron Popeil Set It And Forget It” player. Not going to wow you with pure athleticism, but he has a true NFL motor. He will be a guy you just plug into the middle of your defensive line and not have to worry about anything else.

Denzel Mims, WR, Baylor – This is an Aaron Rodgers dream pick. Mims has a huge catch radius, speed to beat you downfield, and size to win 50-50 balls. In a normal year for wide receivers, he’d be a top 15 pick easily. But the depth and top end talent at the position puts him in a great place to begin his career.

Cesar Ruiz, IOL, Michigan – A down year for top end talent along the interior of the offensive line, Ruiz is the first one off the board at 31.

D’Andre Swift, RB, Georgia – There are so many reasons why the Chiefs should draft a defensive player, but how scary would this offense be if they’re able to land someone like Swift?

While we have no idea when things will return to normal in the world of the Coronavirus, we do know that the NFL will eventually take the field. Stay tuned to backsportspage.com as we continue to break down possible destinations for the next group of top football talent.