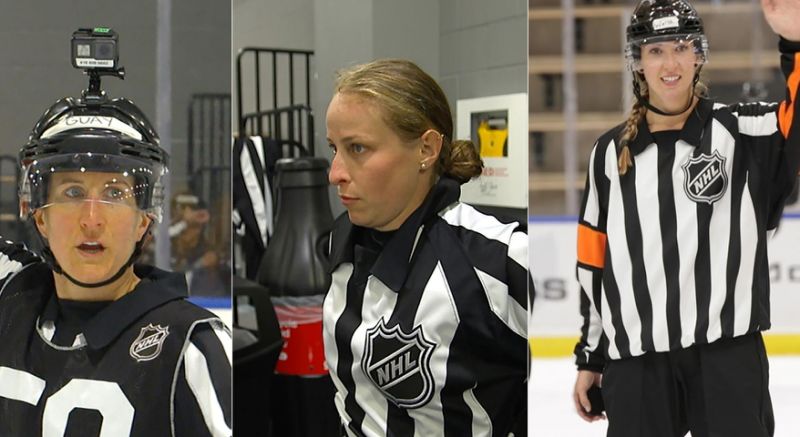 Four women referees have been selected from the 2019 NHL Exposure Combine to officiate rookie games in Irvine, California, Nashville, Buffalo and Traverse City, Michigan. Referees Katie Guay and Kelly Cooke and linesmen Kirsten Welsh and Kendall Hanley were selected out of 96 other women who skated in the Exposure Combine in late August. This news is ground-breaking for women, as no woman has ever officiated an NHL game in history. When asked what he thought, NHL Senior VP and Director of Officiating Stephen Walkom said, “The opportunity to officiate at an NHL Rookie tournament is an important step in the development of the next generation of elite officials and we look forward to watching all four women elevate their performance in this new competitive environment.”

The Combine can be described as a crucial moment for all aspiring referees trying to make a name for themselves in the NHL. This scouting event helps people gain jobs as professional referees in the NHL, AHL, ECHL and The North American junior hockey leagues. For these four women, hockey has been apart of their lives since they were younger.

When asked what this meant to her, Katie Guay replied, “When my playing days came to an end, I missed being at the rink and officiating was a great way to stay on the ice and be back in the game.” She will work the Rookie Faceoff in Irvine from Saturday through Tuesday.

Guay’s resume is very decorated with officiating experience. Guay has officiated for 14 years, including at the 2018 PyeongChang Olympics. She has officiated both men’s and women’s NCAA Division I hockey, was a part of the first all-female officiating crew at the 2019 Women’s Frozen Four and was the first woman to officiate the men’s Beanpot Championship in 2019. Along with officiating, Guay played Division I hockey for Brown University.

Kelly Cooke is a licensed referee for the IIHF and Division I and has officiated for 10 years. She was also part of the first all-female officiating crew at the 2019 NCAA Women’s Frozen Four. Cooke played Division I hockey for Princeton from 2009-13.

Kirstin Welsh took in the Exposure Combine experience as this was her first introduction to officiating. She played Division I hockey for Robert Morris University from 2015-19 and was captain during her senior season.

Kendall Hanley is entering her 12th season of officiating and is a licensed linesman with the IIHF, NCAA women’s hockey Division I and III and the National Women’s Hockey League. She is also entering her fourth season as a linesman in USA Hockey’s Officiating Development Program. She has officiated in the USHL, NAHL and NA3HL junior hockey leagues.

The Exposure Combine experience provides great training for future officials. It provides and gives a glimpse of the transition between college hockey to professional hockey and helps develop potential referees for the NHL. More importantly, it is also opening doors for women to break into an area previously reserved for men.