Many of the teams that won last night were tasting their first victory of the season. The Cleveland Cavaliers, Dallas Mavericks, Indiana Pacers, and Portland Trailblazers all won last night, some rather convincingly and some over teams that were in conference finals last spring. 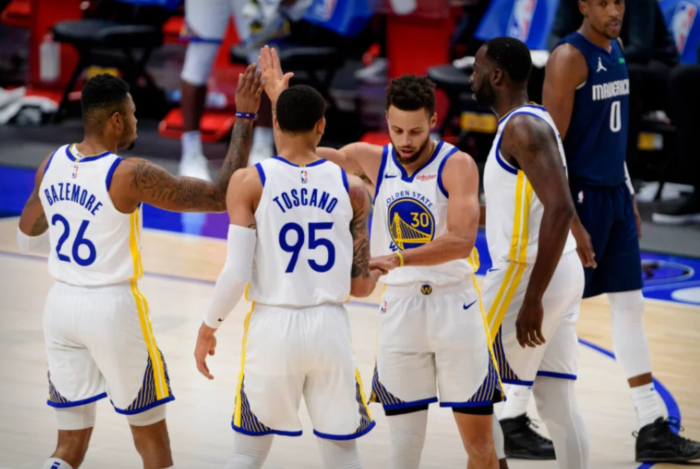 Nine teams remain undefeated as the first week of the 2021-22 NBA season comes to a close:

Who is your biggest surprise and why? Who has what it takes to continue to be a surprise winning team?

Seven teams have yet to win a game:

Who will come up from this adversity and rise like a phoenix from the ashes? What will it take to get them where they need to be? 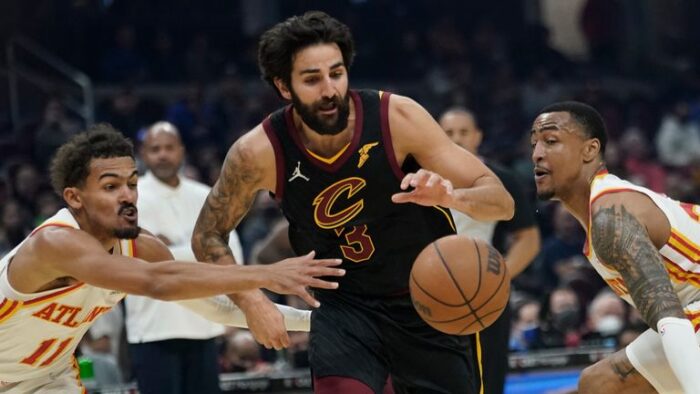 In a showdown between Ricky Rubio and Trae Young, the veteran Rubio won the battle by getting his teammates involved and the Cleveland Cavaliers got their first win of the young season last night against a team that was in the Eastern Conference Finals last year – the Atlanta Hawks.

Six Cavs scored in double figures, while nine players sat with DNPs and various injuries. Rubio led wirth 26 points, six rebounds, and eight assists. Evan Mobley had a nice double double with 17 points and 11 rebounds, Collin Sexton and Lauri Markkanen dropped a dozen each, and Jarrett Allen finished with 11 points and 14 rebounds. They also held the Hawks to 17 third quarter points to seal the win after a competitive first half.

Young didn’t get much help last night, as he led all scorers with 24 points on just .364 shooting. Cam Reddish had 19 points and six rebounds, De’Andre Hunter added 12 points, while Clint Capela finished with 10 points, 14 rebounds. John Collins only mustered six points on the night, but had 12 rebounds. Danilo Gallinari is still sitting with left shoulder soreness. The Hawks only shot 38 percent from the field and 29 percent from downtown. They are 1-2.

NEXT UP
Pistons at Hawks – Monday
Cavaliers at Nuggets – Monday

Tyler Herro may have been the hero for the Miami Heat the past couple of games, but in those, they are 1-1. Where is the Kyle Lowry impact and when will it kick in? And what about Victor Oladipo, who Bill Simmons thought was the best thing since sliced bread? Oh, yeah, he’s still rehabbing that right knee. Good call, Bill. 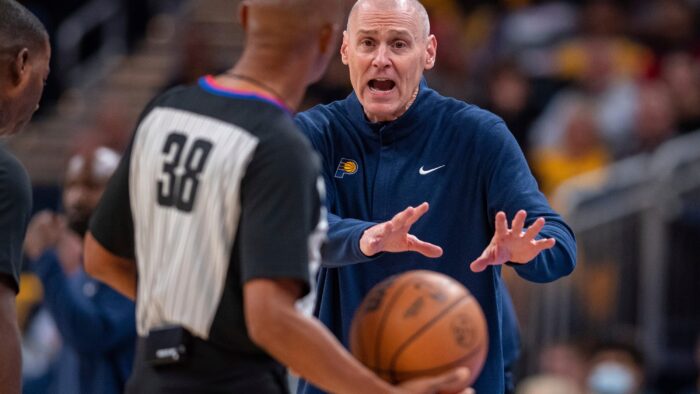 New head coach Rick Carlisle finally got the Indiana Pacers over the hump and got them their first win in three tries – not with Myles Turner, who went from 40 points to four. Nor with Domantas Sabonis, though he finished with a respectable 17 and 12. Nope, it was Chris Duarte, the rookie from my home state Oregon Ducks, who has averaged 20.3 points per game in his rookie season, and led the team with 19 last night. Malcolm Brogdon finished up with 18 and 14, while Jeremy Lamb had 12.

Due to an eight point third quarter from the Pacers, Miami hung in there and pushed things into an extra period with Herro’s 30, 19 from Jimmy Butler, Bam Adebayo with 17 and 16 on the night, and 14 points on .500 shooting from Duncan Robinson. But the Heat simply ran out of gas as the Pacers raced past them 16-5 in the extra period.

NEXT UP
Bucks at Pacers – Monday
Magic at Heat – Monday

There are rumors out there that Luka Doncic and Kristaps Porzingis can’t share the same stage, and that Porzingis didn’t like playing second fiddle last year. But like anything else you read in the news these days, you have to take it with a grain of salt.

Dallas’ teamwork was top notch last night north of the border, as the starting five collaborated well and each scored in double figures to take down the Toronto Raptors. Doncic led all scorers with 27 points, nine rebounds, and 12 assists. Second fiddle was Tim Hardaway, Jr. with 25 points, while Porzingis finished with a solid 18 points, 10 rebounds, and four blocks. Dorian Finney-Smith and Dwight Powell finished with 11 points each.

“Great teams, they don’t lose two in a row, and they find a way to win, especially in hard situations.” — Dallas Mavericks head coach Jason Kidd

NEXT UP
Bulls at Raptors – Monday
Rockets at Mavericks – Tuesday 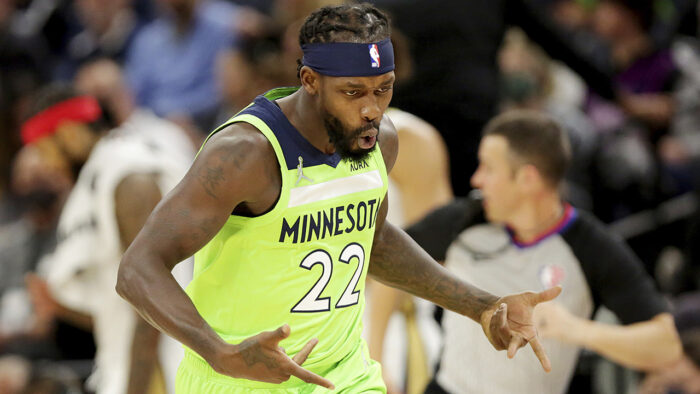 When Karl-Anthony Towns is focused more on getting points than rebounds, you know it’s going to be a painful night for the opposition. Especially when you have a second-year talent like Anthony Edwards to take care of the boards. And even more so when Towns fouls out.

The Minnesota Timberwolves are undefeated in this young season because of the combination of Edwards and Towns. The New Orleans Pelicans are winless because of the dysfunction and distraction in the organization, and the fact that Zion Williamson is doing his best Oliver Miller impression and it isn’t on the court. Brandon Ingram (aka KD-Lite) is left to lead the team, much like he had to when he first came to New Orleans. He led with 30 points, but only got 20 from Jonas Valanciunas, 14 points and 14 rebounds from Nickeal Alexander-Walker, and 11 from Devonte’ Graham, who doesn’t seem like half the player he was in Charlotte.

The Wolves ate the Pelicans up, especially Towns, who scored 15 of his 25 in the first 12 minutes of play. Edwards finished with 19 and nine, six of those on the defensive glass. D’Angelo Russell and Naz Reid kicked in 12 points apiece in the win. These two teams play again on Tuesday, in the Target Center … again.

NEXT UP
Pelicans at Timberwolves – Tuesday As I said from the beginning of the season, my dark horse for 2021-22 is the Chicago Bulls. And they continue to prove me right, now 3-0 with two of those wins against divisional rival, the Detroit Pistons.

With so many weapons, it was DeMar DeRozan’s night to shine – like he had many times in Toronto and San Antonio. Double D finished with a game high 21 points, six rebounds, and six assists. Nikola Vucevic added 15 points and 19 rebounds, Zach LaVine added 14, and Lonzo Ball had 13 points, four blocks, and three steals. Alex Caruso’s 12 points reminded us that he’s a Chicago Bull now and Javonte Green finished with 10 points.

Detroit continues to develop and rebuild around Saddiq Bey, who had 20 points and 16 assists for the Pistons. Only Trey Lyles (12 points) and Kelly OIynyk (10 points) made any significant contributions, and that was off the bench, as the starters (outside of Bey) combined for a paltry 22 points between the four of them.

NEXT UP
Pistons at Hawks – Monday
Bulls at Raptors – Monday 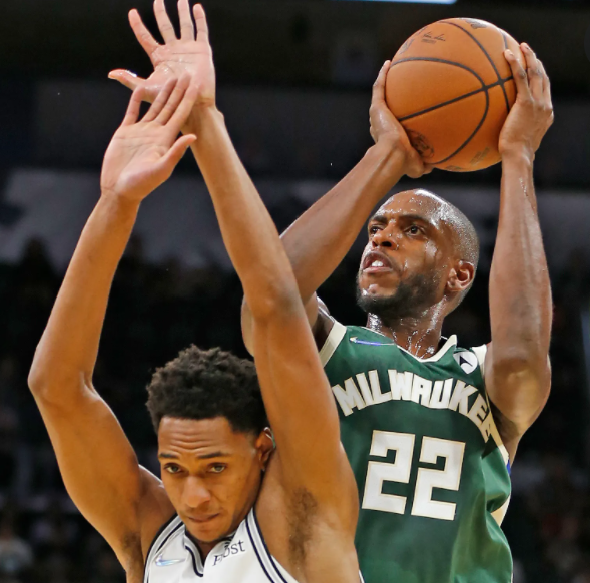 Middleton took the reigns and guided the Bucks to a bounce-back win against another quality team – the San Antonio Spurs. Middleton finished with 28 points, while the former two-time MVP, Giannis Antetokuonmpo, rode shotgun with 21 points, eight rebounds, and eight assists. Jrue Holiday and Pat Connaughton contributed 16 points apiece, while George Hill had 15 and Grayson Allen put up 10.

San Antonio had six in double figures with Doug McDermott leading the way with 25 points. Keldon Johnson added 20, Lonnie Walker IV finished with 17, Derrick White added 14, and it was 10 points each for Dejounte Murray and Jakob Poeltl. San Antonio gets the struggling Los Angeles Lakers on Tuesday night. 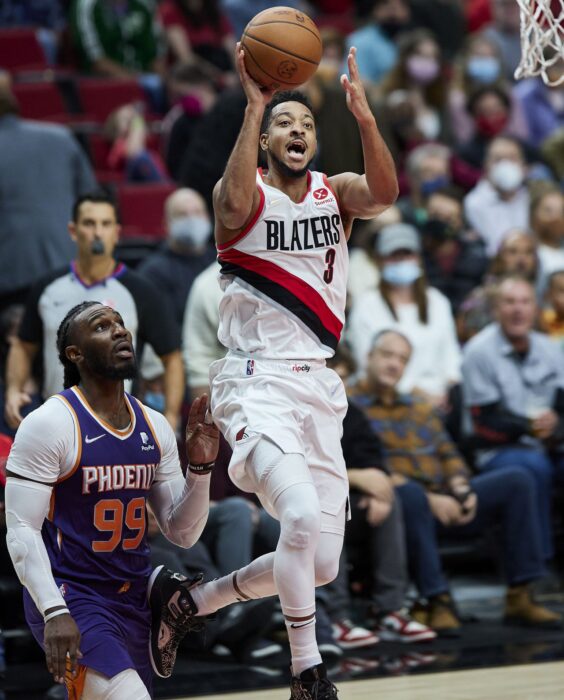 Phoenix’s inconsistency is what cost them – and Chris Paul – their shot at a championship last July; and it’s cost them a winning record off of what should have been a launchpad from disappointment in having been up on the Milwaukee Bucks 2-0 and then getting swept.

By the same token, Portland was needing a win, and got one – resoundingly – with a 29 point performance against a team that has called themselves an offensive juggernaut. That juggernaut was out done by Portland in every facet last night as the Blazers shot out to a 67-47 first half. C.J. McCollum shot .526 to lead the Blazers with 28 points. Damian Lillard finished with 19 points and eight assists, Anfernee Simons had 18, Norman Powell added 16 points, and Nassir Little had 11. Jusuf Nurkic, who I believe to be the key to any success Portland has this year, had nine points and 12 rebounds, 11 on the defensive end.

Phoenix was led by Devin Booker’s 21 points, but his only other help offensively was 14 points each from Elfrid Payton and Mikal Bridges, who both shot above .500, but didn’t take that many shots. Some juggernaut. Credit the Blazers’ lock down defense, which if it keeps up, will help them win more games than Lillard’s late clock heroics.

NEXT UP
Trailblazers at Clippers – Monday
Kings at Suns – Wednesday 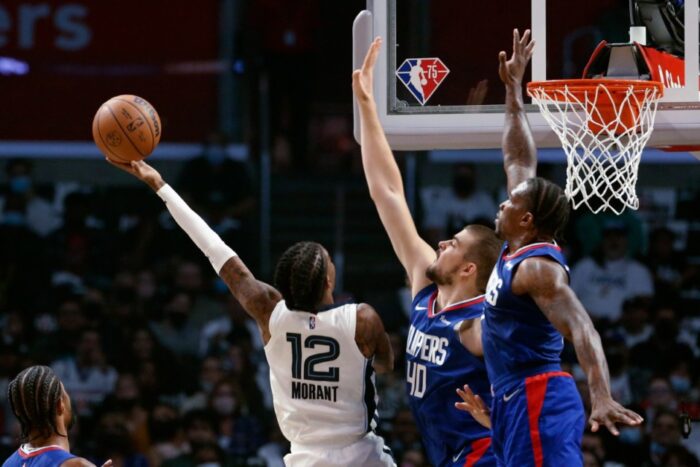 Chin up, Los Angeles Lakers, you aren’t the only winless club in L.A. and you may have your challenges again tonight – Ja Morant is in town. Right now, the leading candidate for MVP is set on taking down the big dogs, one by one. Last night it was Paul George and his 41-10 night; tonight it might be breaking down Russell Westbrook, Anthony Davis, and LeBron James.

Morant does so much more than score 28 points in a game; he cuts through the paint, delivers the rock, and breaks down defenses like a hungry grizzly tears through the tundra and the salmon-filled streams and rivers. Last night in L.A., he got all his starters involved, dishing out eight assists, and having all score in double digits for another Memphis win.

Other than George’s performance, the only other highlight of the night was Eric Bledsoe’s incredible block on Adams; Bledsoe is 6’1” – Adams is just shy of 7’ tall. Bledsoe finished with 12 points, and Reggie Jackson finished with 17. 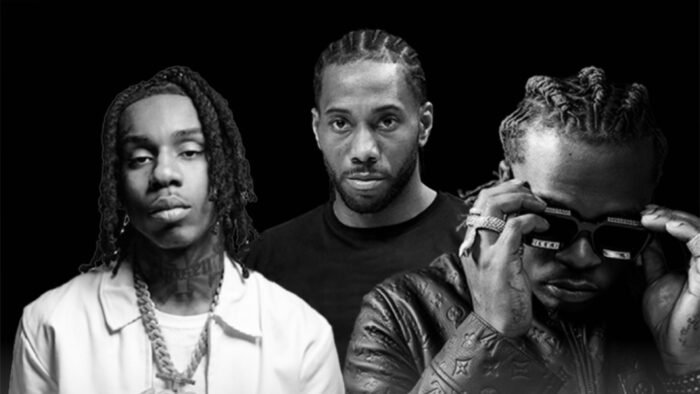 NEXT UP
Grizzlies at Lakers – Tonight
Trailblazers at Clippers – Monday