NOT ANY GIVEN SUNDAY 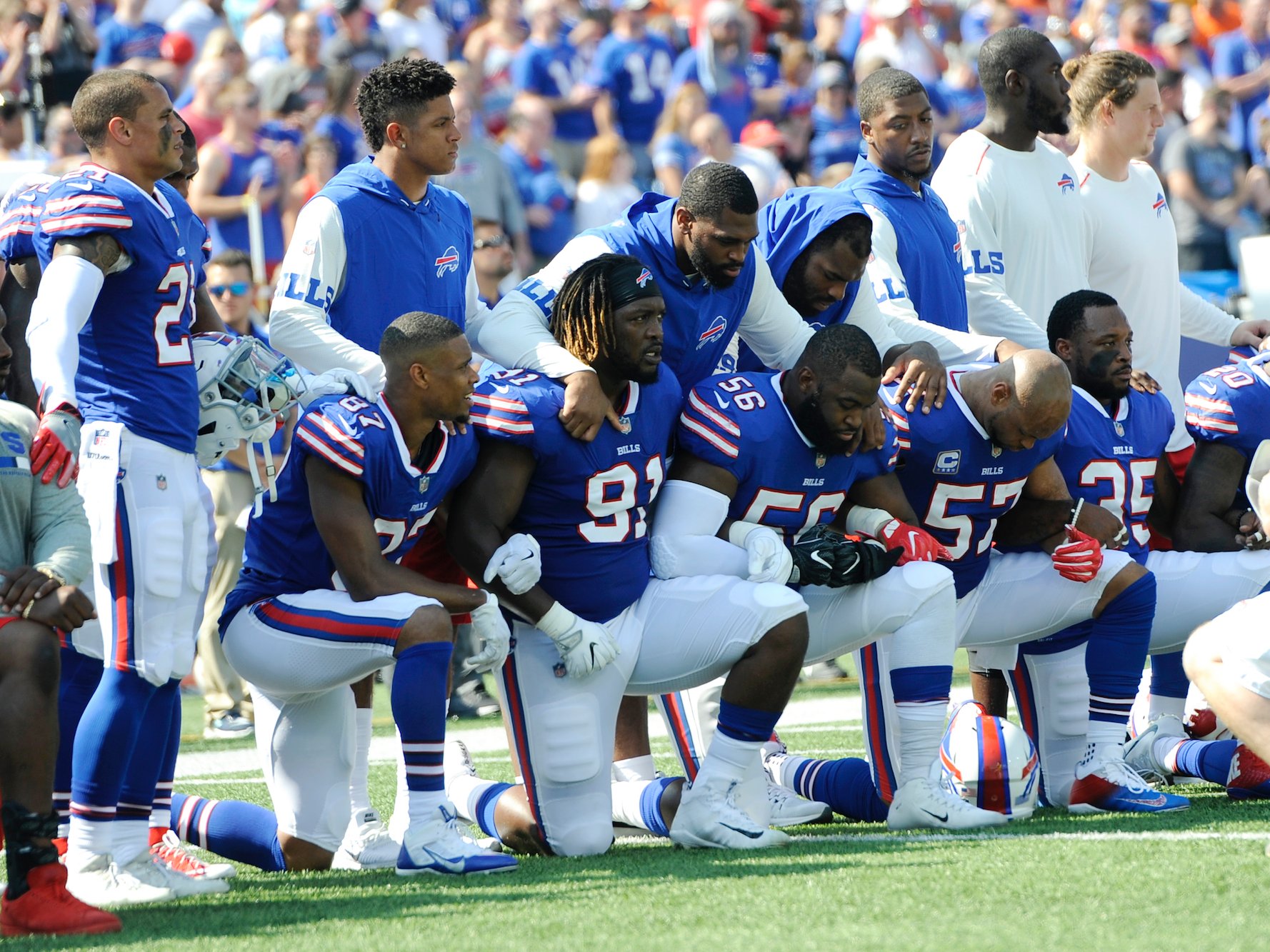 This was not any given Sunday, sure football was on the television but the NFL looked different.  This NFL organization had just been attacked by the 45th President of the United States –

“Wouldn’t you love to see one of these NFL owners, when somebody disrespects our flag, to say, ‘Get that son of a bitch off the field right now, out, he’s fired. He’s fired,'” Trump said. “You know, some owner is going to do that. He’s going to say, ‘That guy that disrespects our flag, he’s fired.’ And that owner, they don’t know it [but] they’ll be the most popular person in this country.”

The First Amendment guarantees freedoms concerning religion, expression, assembly, and the right to petition.  It forbids Congress from both promoting one religion over others and also restricting an individual’s religious practices.  It guarantees freedom of expression by prohibiting Congress from restricting the press or the rights of individuals to speak freely.  It also guarantees the right of citizens to assemble peaceably and to petition their government.

But we have a President who believes in dividing not just the United States but the world.  His language is not one of unity but screw those who don’t agree with “us.”  Is it no wonder that some find this detrimental to what the United States stands for; and what exactly is that – justice for all???

When Colin Kaepernick first put his knee down during the National Anthem that was what he was questioning – where is the justice for all?  He was making a statement about the inequalities in the world today – especially for African-Americans.  He sparked a movement one that has unfortunately resulted in him being black balled by the NFL.

So back to the 45th President – who obviously doesn’t get it; as he stood in front of his base in Alabama – standing tall in his white privilege he had the crowd going with words like “those people” and “us” and “them.”  He was throwing the hungry dog’s one bone after another and they were loving it.  It must be nice to sit on your high horses without a care in the world feeling good about yourself with no empathy for others.  Because people who truly want to have an adult dialogue about race care about what the other person is saying.  We can agree to disagree but we have to take the time to sit at the table and have a conversation.

But nope not our President – he wants to burn the damn table.

We all have a right to express how we feel and the constitution tells me I have a right to protest.  Just like you have a right to disagree with me.  But as a country we have to do better – we have to start talking to each other and stop grand standing.  We have to stop with the name calling and not caring about others.  I wish our President would get this and be the leader our country so desperately needs right now.

But we all have it in us to do better and I hope this feeling of unity continues between sports fans, athletes from different sports and owners.  I also hope one day someone has the balls (I mean courage) to offer Colin Kaepernick a job and not worry about the man who likes to convey his every thought to 140 characters or less.