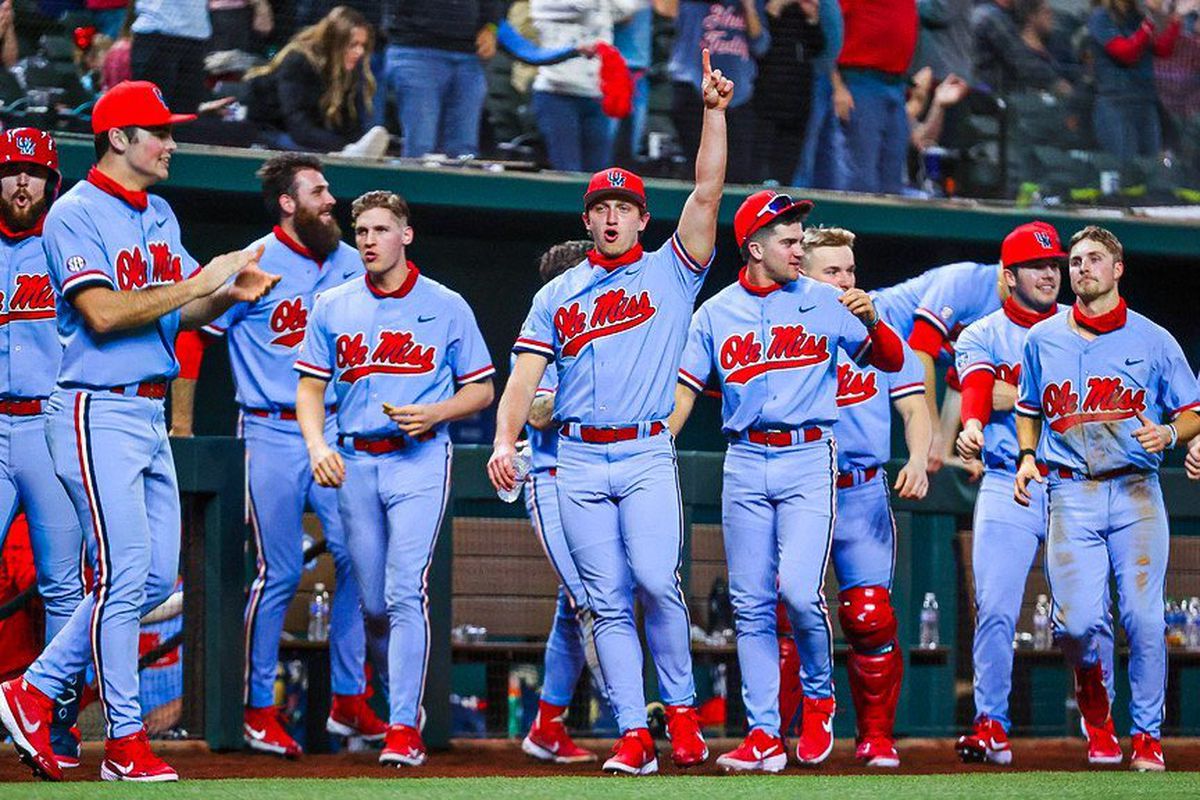 The story of the 2022 Ole Miss baseball becoming National Champions will be told for years to come. A team once left for dead sitting at 24-19 ( 7-14) made the improbable happen. As the last team standing in Omaha, the Ole Miss baseball became National Champions for the first time in program history. For all intents and purposes, the Rebels began post-season play the first weekend in May, coming off a heartbreaking weekend series loss to Arkansas.

Ole Miss won seven of its final nine conference games to get its overall record to 32-22 (14-16). Finishing the month of May out strong earned them the nine seed in the SEC tournament and a decent chance to make the NCAA tournament. In fact, the Rebels felt they were in a good place heading into the SEC tournament. Vanderbilt eliminated the Rebels in game one of the SEC tournament 3-1. With the early exit, Ole Miss was left to wonder whether its bubble had been busted.

Selection Monday is a morning full of angst for the Ole Miss baseball team. They sit together, waiting to see if their name will be called as one of the 64 teams selected to play in the NCAA Men’s baseball tournament. Miami, the 6th overall seed in the tournament, appears as the one seed matched up with four seed Canisius in game one of the Coral Gables regional. Seconds later, Arizona appears as the two-seed matched up with the three-seed Ole Miss. The room in Oxford erupts with excitement and joy. The Rebels are finally back on a level playing ground. Ole Miss has a new motto heading into the NCAA tournament: “Don’t let the Rebs get hot.” They pack their bags and head to Coral Gabels to prepare for the regional.

The Rebels arrive in Coral Gables during the middle of the week, determined to take full advantage of their second chance at baseball life in 2022. Friday, day one of the Coral Gables regional, was pushed back to Saturday due to inclement weather. Ole Miss played a late-night thriller Saturday, defeating Arizona 7-4. With the win, Ole Miss moved into the winner’s bracket to take on Miami Sunday afternoon with the win. Ole Miss would take care of the Hurricanes in an old-school pitching duel, winning 2-1, sending the Rebels to the championship round. Sunday night, Arizona would climb out of the losers bracket earning the right to face the Rebels Monday afternoon. Monday afternoon Ole Miss would have an offensive explosion in game six, defeating the Wildcats 22-6, setting up a super regional matchup between Ole Miss and Southern Miss in Hattiesburg.

Pete Taylor Park is full of electric energy Saturday afternoon, waiting for the first pitch of the Hattiesburg Super-Regional between the Rebels and the Golden Eagles. The home fans are rowdy and ready to send their Golden Eagles to Omaha for the first time since 2009. Ole Miss had other plans and would strike first in the top of the third inning in Game one and never looked back. Ole Miss would take game one 10-0 and game two 5-0. The story of the Super-Regional would be the Ole Miss pitching staff not giving up a single run in Hattiesburg. The Rebels outscored the Eagles 15-0 in the Super-Regional round, sending the Rebels to Omaha for the first time since 2014.

Ole Miss is one of three SEC schools competing for the National Championship in bracket two. Arkansas, Auburn, Ole Miss, and Standford make up bracket two of the College World Series. Ole Miss never had the opportunity to play Standford as they lost the first two games they played in Omaha. The Rebels won bracket two of the College World Series by beating Auburn once and beating Arkansas twice. The Razorbacks defeated the Rebels on Wednesday night, forcing a winner to take all game on a Thursday afternoon. Ace Ole Miss pitcher Dylan Delucia pitched a masterful complete game shut out on short rest, allowing four hits and no walks in a 2-0 victory over Arkansas. Defeating the Razorbacks set up the best-of-three championship series between Ole Miss and Oklahoma.

Coach Mike Bianco elected to save Hunter Elliot for Saturday and throw sophomore Jack Dougherty in Game one Saturday night. Dougherty threw a perfect five innings before running into trouble in the sixth. Ole Miss coach Mike Bianco brought in Mason Nichols to get them out of the jam. The Rebels took game one 10-3, putting the Sooners’ backs against the wall in a must-win game two for the Sooners.

The Sooners took a 2-1 lead into the bottom of the eighth inning in game two. Oklahoma coach Skip Johnson decided to pull starter Cade Horton after recording one out in the eighth inning, bringing Trevin Michael to close the game. The moment proved too big for Michael, giving up two hits and having two wild pitches. The two wild pitches allowed the eventual two winning runs to score for the Rebels. Ole Miss would take game two 4-2 and win their first baseball National Championship in school history. The wait for the Rebel faithful that waited so long to celebrate a National Championship in baseball is officially over.