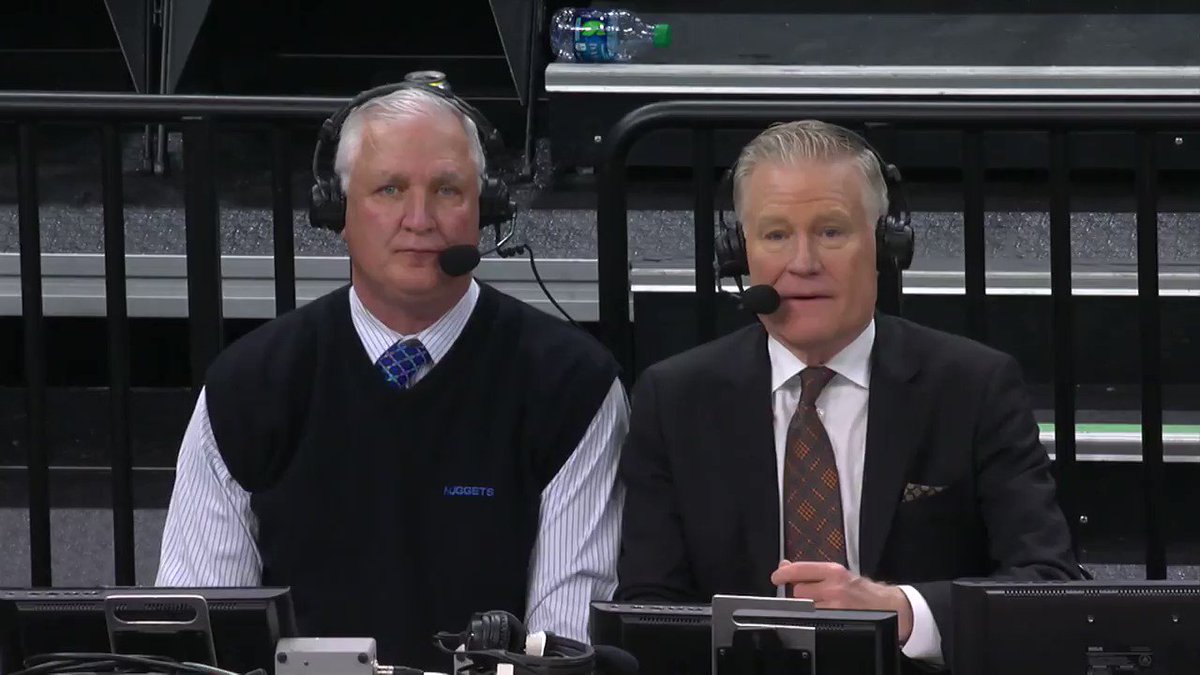 In these challenging times we’re in right now, a world without sports is something we’re all unfamiliar with. So we caught up with legendary play-by-play broadcaster Chris Marlowe, who’s experienced success on many different levels from his teenage years even until now, to talk hoops and the nature of the business.

Marlowe is currently the Denver Nuggets’ play-by-play announcer for Altitude Sports and Entertainment, and has been since 2004. If you’re a local Nuggets fan or an NBA League Pass Nuggets Subscriber then you’re very familiar with him and his voice. For those of you who may not be though he is known as one of America’s most versatile sports broadcasters, having called college football, volleyball, basketball and a plethora of other sports (totaling 25 to be exact). He’s done so for the likes of NBC, ABC, CBS, ESPN, Fox Sports and the PAC-12 Network.

As is true for many in the sports media industry, Marlowe has a background in playing sports before he got behind the microphone. While attending Palisades high school in Los Angeles, California he was both a basketball and a volleyball standout. In volleyball, his team won three Los Angeles City championships.

He continued playing both sports in college where he accomplished playing 114 games straight in basketball (setting a SDSU record) and winning the 1973 NCAA volleyball tournament as a star on the San Diego State University Aztecs. 21 years later, he was inducted into the Aztec Hall of Fame. In addition to his athletic career, Marlowe graduated in 1974 with a B.A. in physical education.

A year after college he started competing in beach volleyball tournaments, where he ended up winning eight open tournaments, including two Manhattan Beach Opens and the 1977 World championship.

Later, after a series of tries, Marlowe made the 1984 U.S. Men’s National Volleyball team, where he was unanimously voted as team captain by his teammates his first day on the team. They then won the Gold medal.

Coming into the play-by-play industry with such a decorated athletic career is one thing that sets Marlowe apart from the rest but even he’ll tell you that’s not all it takes.

“I’ve always thought that preparation is the key to being a success in anything. You have to be able to put in the time to make sure that you know everything you could possibly know about the sport, that particular game and the participants, ” said Marlowe. “Then if you have an engaging personality, you need to let that come through. Early in my career my best friend said to me ‘you know you’re pretty good at this, but I think you’d be even better if you just went with it. You let your personality play.’ I’ve always taken that to heart that you just have to be yourself and once you have the elements of how to call a game, and the knowledge and the prep that it kind of all gets bundled together.”

Fortunately for Marlowe (and his listeners) this current COVID-19 pandemic that the world is in doesn’t have him any less prepared for when he’s called upon to call games again. With no definitive answer of whether or not this year’s NBA season will resume this is all speculative, but Marlowe believes if the NBA does come back it will be strictly for playoff competition. However it’s likely that fans still won’t get clearance to attend games by then so what would that mean for broadcasters?

“Altitude Sports, who I work for, is a local [broadcaster] and obviously ESPN, TNT and ABC would be televising so if [they] wanted to they could have their broadcasters on hand and we could broadcast from Denver, and call it off the monitor, which I’ve done plenty of times,” said Marlowe. “Or maybe none of the broadcasters are there and they all work off the monitor, and it’s just the players, the refs and the staffs in there.”

With that being said if the NBA does get back up and running (fingers crossed), you’ve got to wonder how that fares for many teams, including the Denver Nuggets, who currently sit at 43-22 as the third seed in the West. If the playoffs were to start today their matchup would be against the Houston Rockets, whom they split their season series with 2-2.

Last season the Nuggets had a heartbreaking game 7 loss against the Portland Trailblazers to send them home in the second round of the playoffs. This season they have title aspirations yet again. However the road might be harder. Hypothetically speaking after facing the Rockets in the first round they could face the Clippers and then if they beat them, face the Lakers, just to make it out of the West. That’s definitely an uphill battle.

“I think they would have a good chance to advance out of the first round, albeit difficult,” said Marlowe. “Then [the Clippers] would be a tremendously difficult assignment, and then to get by them and perhaps face the Lakers, who would have home court, it’s a tough road. I think the Nuggets’ personnel is better this year. I think they’ve played about the same. I think some of the players have not played quite up to their capabilities. Some have, some have played better, but to beat three quality teams in the West in a seven game series would be quite the challenge.”

Needless to say although it’s an uphill battle, if the Nuggets don’t get out of the West this year you’ve got to think that the Nuggets’ front office will want to shake the roster up some. If so, whom could they bring in to help them get over that hump?

“I think it depends on how the season ends…I think there would be a shuffling effect, and it depends who’s available,” said Marlowe. “If I had my choice I would pick DeMar DeRozan. I think he’s a legitimate 20 PPG scorer, he’s reliable, decent defender [and] experienced.”

DeRozan is averaging 22.2 PPG, 5.6 RPG and 5.6 APG this season with the San Antonio Spurs and has a player option of $27.7 million for next season.

So whether or not the 2019-20 NBA season will continue remains to be determined, but if it does you can count on Chris Marlowe for Nuggets coverage going forward.