Only Things Certain are Green vs. Red/Black in ECF, and L.A. – L.A. in WCF 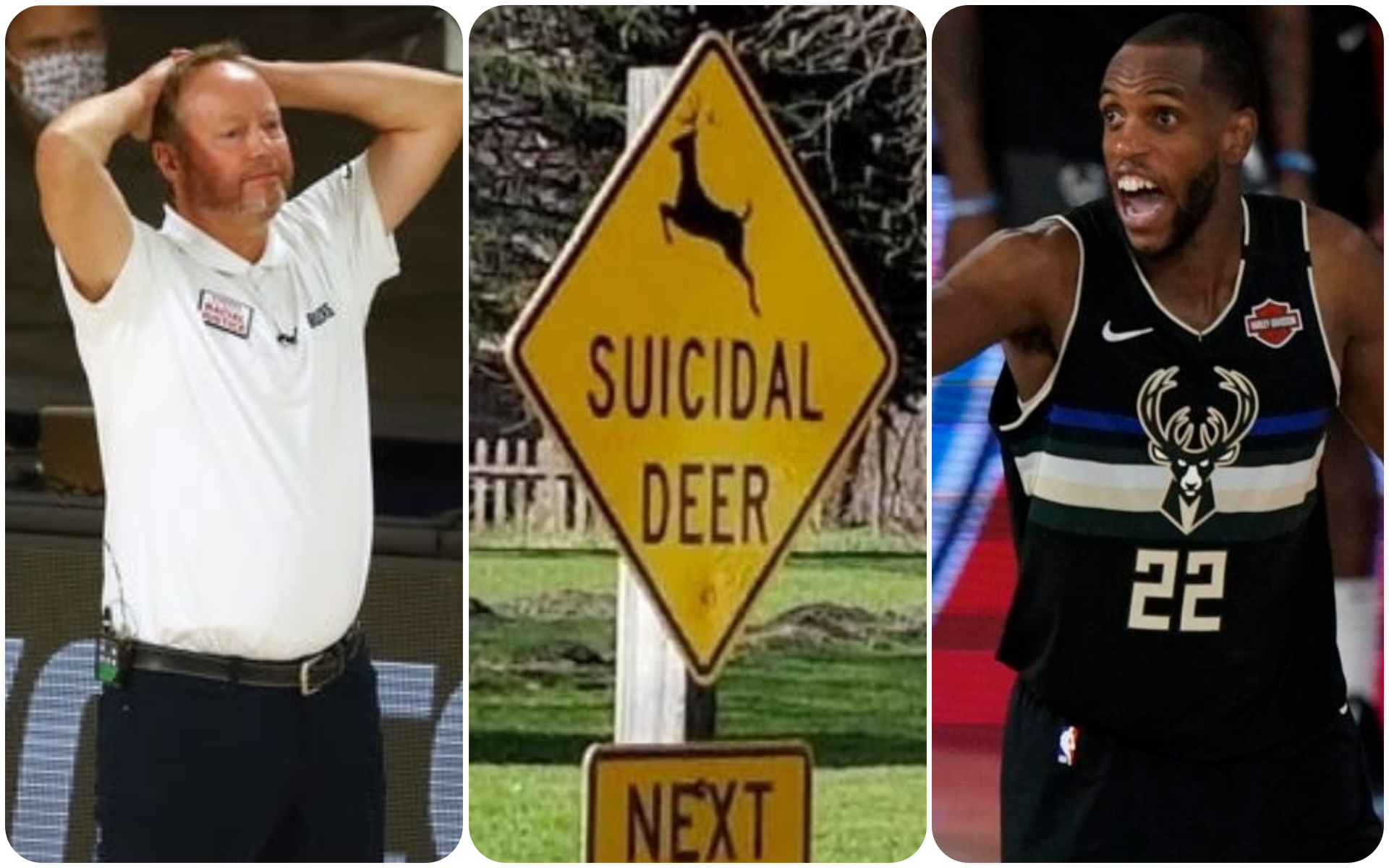 Clearly, the Bucks are still sitting games out as the Miami Heat take a 2-0 advantage, Houston vanquishes Oklahoma City's otherwise solid season, and it going to be green vs. red and black in the ECF, and an L.A. - L.A. WCF for certain.

When you’re a team whose mascot is a deer and it’s September, you have a target on you constantly – and the Milwaukee Bucks are in trouble.

And I don’t mean bloody carnage in the woods from a heightened advantage in a camouflaged tree stand kind of trouble. I mean Target stores in Minneapolis kind of trouble – up close and personal.

In many states, including Florida, hunting season is still about a month away. In Wisconsin, it starts in two weeks, and the Miami Heat appear to be playing by Wisconsin rules, poaching on the Bucks like they’re the Kenosha Fawns, for what appears to be a commanding 2-0 lead in the Eastern Conference Semi-Finals.

Either the Heat have done an incredible job watching film, or the Bucks have become that predictable and head coach Mike Budenholzer’s playbook went from being the best record in the NBA for the majority of the season to (1) get the ball to Khris Middleton and let him turn it over with errant passes or shots short of the rim, or (2), let Giannis Antetokuonmpo pretend like he’s LeBron James, bring the ball up every damn time, contort and EuroStep his way to acrobatic layups, get fouled, and then head to the line and miss free throws.

(The difference is, James can make his free throws).

It gets kinda predictable after the first 20-30 times.

Or, just let Antetokuonmpo foul Jimmy Butler and hand the Heat Game Two. The Bucks now have to win four of the next five – I don’t see that happening under the current two-play playbook.

Makes you wonder if the Heat are that good and winning games, or if the Bucks have become that one-dimensional and are losing to a team they shouldn’t be losing to.

I’m going with the Heat being that good. All season long I, and others, have pointed at the job that Pat Riley has done in assembling these talents and personalities. They took a gamble on Butler and also had the patience to let Goran Dragic’s game evolve and mature, which both have been beneficial in this round of the playoffs.

Then there’s the ‘second unit,’ which would be a first unit on any G League team … possibly even in Sacramento, Chicago, Cleveland, New York, or Washington.

I’m sure Oklahoma City, Utah, Phoenix or even Toronto wouldn’t mind a Tyler Herro, Kendrick Nunn or Duncan Robinson in their respective runs right now. With Riley’s work in the front office and head coach Erik Spoelstra’s tenured run on the sidelines, the Heat have just as much a chance at doing something special without the bought-and-paid-for names of James, Dwyane Wade, and Chris Bosh.

Clearly the Bucks are still sitting games out.

In Game Six, Russell Westbrook looked like a mole for the Oklahoma City Thunder, doing what he did most in Oklahoma City – getting turnovers, which allowed the Thunder to snag a Game Six win and force last night’s Game Seven.

But being a double agent has its perks, as you remember the plays that your former head coach has in his back pocket. That played to Westbrook and Houston’s benefit last night as James Harden struggled with his shot and resorted to playing defense to give the Rockets a hard-fought Game Seven victory, and the chance to try and take down the Los Angeles Lakers in the Western Conference Semis.

This should be an extra special series for Westbrook and Harden as it’s a roundabout way for them to seek revenge on LeBron James, who bounced the 2011-12 Oklahoma City Thunder out of the NBA Finals as a member of the Miami Heat. A taste of the Finals that Jeff Green never got to sample as he was traded for Kendrick “Clarissa Explains it All” Perkins prior to that season.

Harden shot 26.7 percent last night – good enough for Houston to fall out of the playoffs yet another year – but stepped up his defense enough to negate a Chris Paul triple double and make Luguentz Dort’s 30 point night go for naught.

Westbrook came up with 20 points on 45 percent shooting and limited his turnovers to two, a rarity, while using his defensive skills to disrupt the Thunder as well.

But let’s not forget that this was an Oklahoma City Thunder team that wasn’t supposed to be here in the first place.

Westbrook requested the trade to Houston after Paul George headed for home in L.A.’s foothills. The Thunder were supposed to be decimated. General Manager Sam Presti did the best he could in bringing Paul back to Oklahoma City, where his play as a member of the Hurricane Katrina-relocated New Orleans Hornets gave OKC enough buzz to generate interest in and then acquire their own NBA franchise.

Paul was supposed to be temporary, due to being in the midst of a four-year, $160 million contract signed in Houston. There were even rampant rumors that Presti was going to burn down the house, and shop Steven Adams.

The rebuild was on. Presti acquired Shai Gilgeous-Alexander, four unprotected first round picks, a protected first rounder, and two pick swaps in the trade for George. They also got Paul in the Westbrook trade and a number of picks from Houston for absorbing Paul’s monstrous contract.

“Obviously the most important season is (this) season, and we want to maximize that season the best that we can,” Presti said to media last summer. “But not at the expense of continually and aggressively making sure that we’re repositioning and replenishing the team so that we have a platform and a runway for the next great Thunder team to take shape. I don’t think those things are mutually exclusive.”

But with Paul’s leadership and the faith in head coach Billy Donovan, the Thunder made it work in ways that opened eyes and dropped jaws.

The maturation of Gilgeous-Alexander and Dennis Schroder under Paul’s and Donovan’s mentoring, the emergence of Dort (who came from the G League), and then utilizing the COVID-19 outbreak time for Adams to go home to New Zealand, heal, and come back stronger all played into the Thunder’s litany of successes and surprises this season. In any other year, it’s disappointing.

Given the last 15 months, it’s a success in everyone’s eyes, even their toughest critics.

It’s looking like it’s shaping up to be an L.A – L.A. Western Conference Finals, which is almost storybook as it plays out in the bubble in Orlando, Florida – the happiest place on earth.

Were things normal, this would be a home and home series in L.A.’s Staples Center, where neither the Clippers or the Lakers would have home court advantage.

That’s how it is on the Wide World of Sports campus – no home court advantage. The best teams, the best talent, the most competitive, the most ardent film watchers, that’s who will win.

Teams will surprise us – the Boston Celtics and Miami Heat already are. We always knew the Eastern Conference Finals would be a team in green versus the red and black. Just thought it would be Milwaukee and Toronto.

Again, home court advantage has its benefits, but Orlando is bringing out the best in everyone, and it’s quite refreshing. The Lakers and Clippers first have to defuse the Rockets and crush the Nuggets into fool’s gold first – a couple of 4-2 series at best, in my perception.

The ride is getting more and more fun by the day.

Celtics, Lakers May be Better Than Advertised
Clippers Go from Entitlement Mentality to Execution Mentality