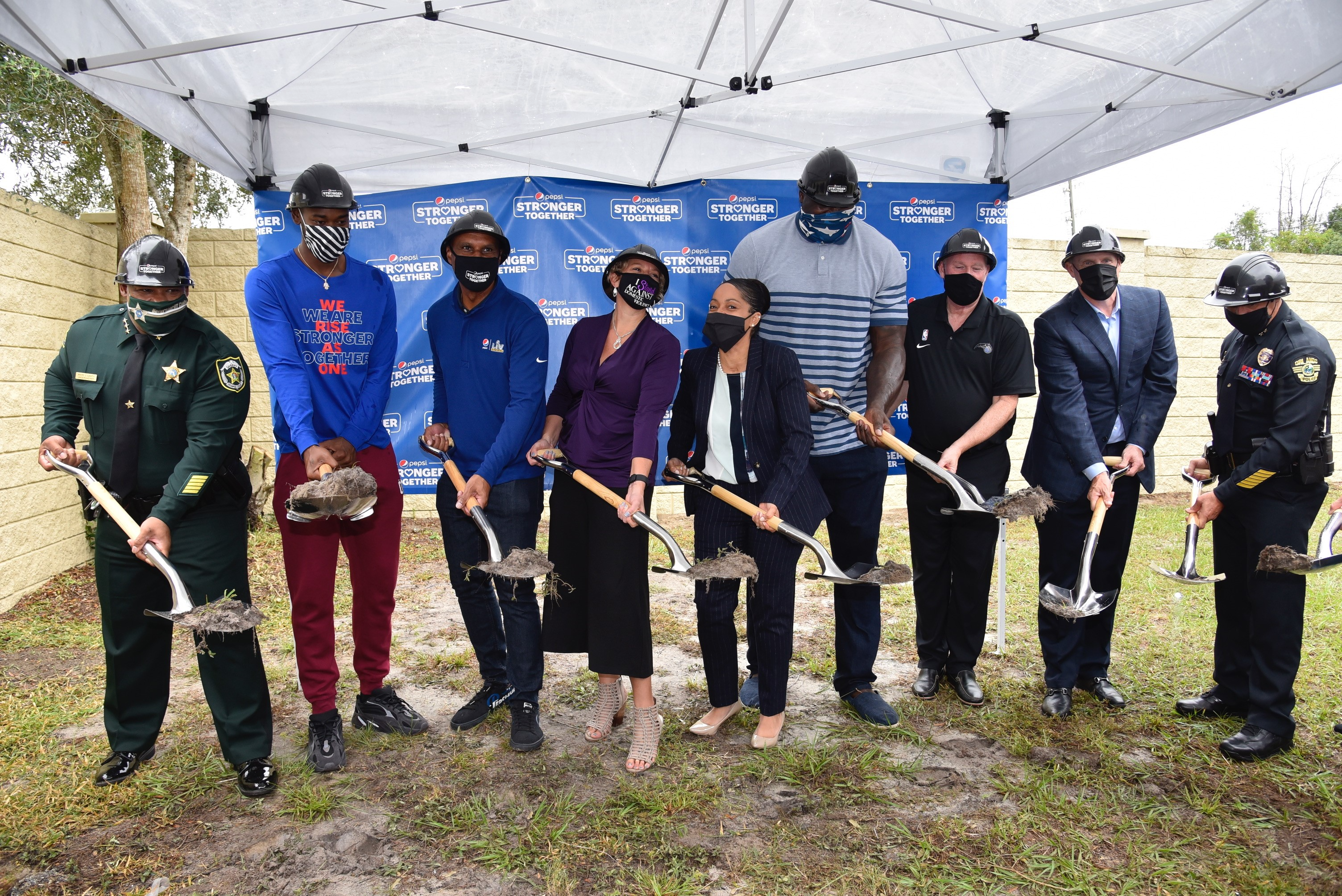 ORLANDO — Domestic violence victims and children who witness the abuse can often feel like they have no one in their corner.

However, a number of Central Florida community pillars are teaming up to make sure that’s not the case in their backyard.

The Orlando Magic and the Shaquille O’Neal Foundation partnered with Pepsi to tip off the Pepsi Stronger Together program on Monday at Harbor House of Central Florida, Orange County’s only state-certified domestic violence organization, which provides critical life-saving services to survivors.

Magic Head Coach Steve Clifford, shooting guard Terrence Ross and NBA Hall of Famer Shaquille O’Neal were among the many on hand for the commencement of the initiative, which featured a groundbreaking event of new and refurbished basketball courts at Harbor House. It’s the first in a series of donations and activations that also include de-escalation and self-defense training courses in partnership with the Close the Gap (CTG) Foundation.

The site was an ideal location to tip off the expansion of Pepsi Stronger Together, a series of grassroots initiatives bringing support to communities across the country with NBA teams, due to the longstanding partnerships between Pepsi, the Magic, the Shaquille O’Neal Foundation and Harbor House of Central Florida.

“Domestic abuse is something that is significant in our community,” PepsiCo Beverages North America South Division President Derek Lewis said. “We sat down with Shaq, his foundation and the Magic and we’re here today to kick off what will be a very long-term partnership in support levels for the Harbor House and all its stakeholders.”

The Harbor House of Central Florida provides an essential service to the local community. It offers safe shelter, a 24-hour crisis hotline, counseling, legal advocacy and justice for thousands of domestic violence survivors and their children each year.

It’s estimated that between two and 10 million children in the United States witness domestic violence each year. These children are at high-risk for emotional, social, and behavior difficulties in life – in general. By building the courts at the Harbor House, the hope is not only to give the kids an activity to participate in, but also demonstrate that they have a number of people in their corner.

“When kids are told that they have some value, that they are smart, that they can make something of themselves, I think it inspires them to do well,” said Orange County Undersheriff Mark Canty. “Everybody wants to know that there are people standing behind them and having an organization like the Harbor House, Pepsi, (the Magic) and the Shaquille O’Neal organization standing behind them absolutely makes it easier for them to succeed.”

Having spent 17-plus years recruiting kids for basketball, Clifford knows firsthand the benefit having a sport or activity can make in an adolescent’s life.

“In many situations basketball or any activity can change a young person’s life,” Clifford said. “It can help get them a free education and I think as much as anything, in my opinion, it also gives them something that helps become who they are, teaches them a work ethic, gives them something they can gain confidence in and it can do so much (for them).”

Ross knows that message all too well. He explained that many of his childhood memories involve basketball. It not only provided a source of enjoyment for him, but also assisted in getting him through many tough times in his life.

“It’s a getaway,” Ross explained. “It’s something that can help you ease your mind, relax, go shoot around take your mind off things. For me, still today, whenever I get stressed out or am going through a lot, playing basketball is a way to kind of escape for a little bit. It will be a big deal.”

Partnering with Pepsi Stronger Together and the Shaquille O’Neal Foundation to assist the Harbor House is just another example of the Magic’s mission to be champions on and off the court in the Central Florida community. On an annual basis, the Magic give more than $2 million to the local community by way of sponsorships of events, donated tickets, autographed merchandise and grants. Magic community relations programs impact an estimated 100,000 kids each year, while a Magic staff-wide initiative provides more than 7,000 volunteer hours annually. In addition, the Orlando Magic Youth Foundation (OMYF), which serves at-risk youth, has distributed more than $25 million to local nonprofit community organizations over the last 30 years.

“What a great cause,” Magic President of Business Operations Charlie Freeman said. “It’s all about giving back. It’s all about the community. On behalf of the DeVos family and the entire Orlando Magic organization, what a great opportunity to build a basketball court here.”

Its effects are sure to last even after the buzzer sounds.