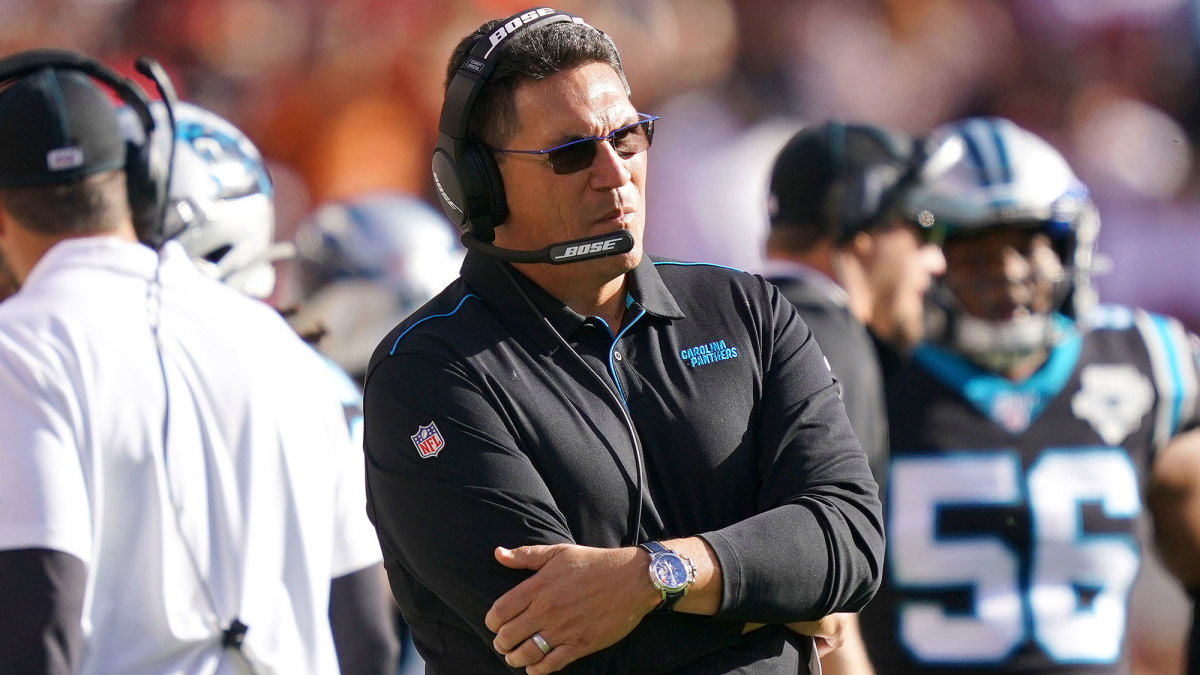 The Carolina Panthers parted ways with Ron Rivera Tuesday afternoon after a 5-7 start, the teams worst start since 2016. Owner David Tepper appointed Perry Fewell as interim head coach for the remainder of the season, but unless he proves himself as head coach material in the final four weeks of the season, Tepper will likely look for a more permanent replacement in the 2020 offseason.

This is the first time that the Panthers have fired a head coach midseason, and the team is not known to change coaches frequently. Rivera was about to finish his ninth season with the team. His predecessor John Fox was with the Panthers for the same length of time and had a very similar tenure to Rivera. Each coach brought the team to a Super Bowl and each coach lost that Super Bowl.

David Tepper is trying to turn the team around and give them a shot at another playoff run, but they are in an awkward position with Cam Newton’s injury. Potential coach candidates will have to consider the taking on a team with one of the leagues worst defenses and trade rumors circulating around their franchise quarterback.

coaches who work under one of the best, if not the best coach in NFL history in Bill Belichick, tend to receive a little extra attention when teams are looking for head coach replacements. McDaniels has been with the Patriots since the early 2000’s slowly moving up in the coaching ranks. Despite the disaster that the Patriots offense has been this season, it is clear that this is due to inconsistency in the Wide receiver group and Tom Brady’s rapidly aging arm.

McDaniels has the age and experience to turn around the Panthers and provide a championship perspective. In addition to a successful career in offensive coaching, he has experience with defensive coaching in his early days with the Patriots. The Panthers will have some stiff competition for McDaniels with teams like the Jaguars, Cowboys, and Browns looking for new coaches this offseason.

It was around this time of year last season when the Packers decided that it was time to release Mike McCarthy after almost thirteen seasons with the team. With the Packers sitting at 9-3 atop the NFC North under new coach Matt LaFleur, it appears this was the right decision. Teams looking at Mike McCarthy are hoping that his year away from coaching this season will make him a well-rested coach ready for a fresh start.

McCarty had led the Packers to a Super Bowl win and a Super Bowl loss, but when his offense started to make even Aaron Rodgers look bad, they knew it was time for a change. I believe this hire would leave some questioning why Tepper thinks McCarty can make an injury prone Newton look good, when he was unable to do so with one of the greatest to ever play.

Jerry Jones said on 105.3 the fan Tuesday that he believes Jason Garrett “will be coaching in the NFL next season.” This confirms something that we already suspected for Garrett, that this season is Super Bowl or bust. Garrett is probably the least likely of the four options here, but with a shortage of veteran coaches available in the offseason, and likely six teams looking for a new head coach, somebody is bound to sign Garrett. Hopefully Tepper gets on the line with the coaches above before Garrett has to become a legitimate option.

Just because teams don’t usually keep their interim HC after firing a coach midseason doesn’t mean it won’t happen here. With four games left in the season, Fewell has a chance to click with the players and prove that he can handle the role of head coach. The NFL is a constantly changing, unpredictable league. If Fewell goes 3-1 or 4-0 to finish the season, Tepper could consider giving him the reins in 2020.

Fewell has spent his career as a defensive coach with the Giants and Bills and could be helpful as the team tries to put together an effective defense in the offseason. He was signed to the Giants in the offseason of 2010 and helped lead the team to a Super Bowl win two years later.

David Tepper has a lot to prove as the teams second year owner. The fanbase doesn’t know what kind of owner he is going to be. Some owners are patient and allow coaches opportunities to grow over multiple tough losing seasons, others are intolerant and keep new coaches coming through every year until something clicks. Tepper has a chance to endear his fanbase and prove himself to be a responsible owner with the right signing this offseason.

A Familiar Face Under Center
Countdown to CFB Playoffs