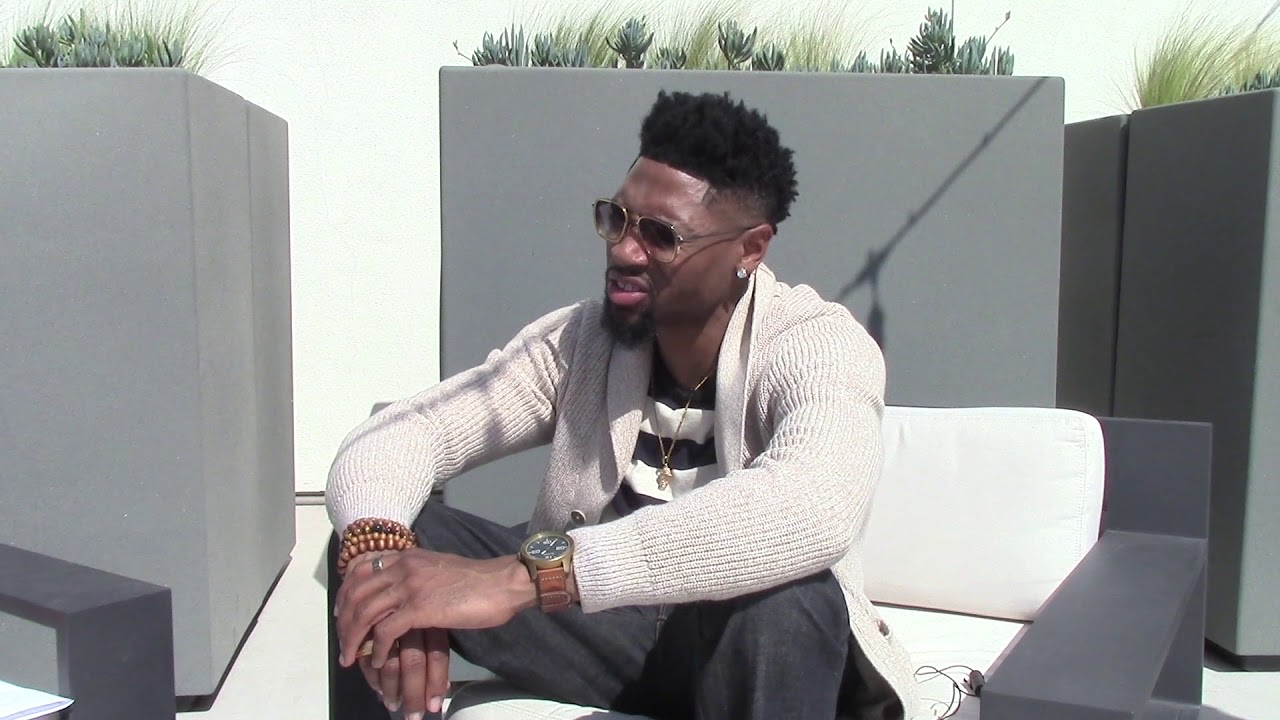 Back Sports Page recently spoke with with actor London Brown, who plays the role of Reggie on the HBO series Ballers, on the eve of Ballers’ series finale, which is set to air on Sunday October, 13 at 10 pm CDT. For those of you who are not familiar with the show, Ballers a comedy-drama starring Dwayne “The Rock” Johnson as Spencer Strasmore. The show focuses on the life of Spencer, who is a retired NFL superstar that is tasked with coping with life after football. His passion for the sport lead him to choose to be the financial manager of other NFL players. Although sports and football is the focus of Ballers, it is not your average sports show.

“People who don’t watch the show will think that Ballers is like a jock guys football show, but it is much more than that,” Brown told Back Sports Page. “We are able to explore the business side of sports, including the deals and how to be responsible. After watching Ballers and you look at sports then you naturally begin to question or have a different perspective of how things are done. Like how contracts are done in the NFL and what terms such as guaranteed means. The things I learned from the show rolled over to my personal life. The car I drive now, I leased. I leased it because I kept hearing don’t buy cars, lease them in season one.”

Brown touched on how Ballers is an educational tool to its fans on the behind the scenes business activity that is involved in the sports world. Not only does the show makes its viewers feel like they are a fly on the wall in the NFL owners’ meetings, but they do a great job of blending sports events and news that are happening in real life with the story of the show. Ballers touch on topics such as players kneeling for the national anthem, the LA Rams building a new stadium, the Oakland Raiders moving to Vegas, and even the Seattle Seahawks’ QB Russel Wilson’s contract will influence future contract negotiations.

“I think they did a good job in blending the two and keeping the show in real time with the NFL,” expressed Brown. “Right now I’m not really into the NFL like that, but I was able to appreciate how the show touched on some of the issues surrounding the NFL without beating the audience over the head about the issues. They [Ballers] touched on the issues just enough to let the audience know that they are aware of what’s going on and we reflect some of our thoughts through the characters. I can really dig how subtle the writers of our show did that. This is shown with some of the small lines of black consciousness that we were able to incorporate within Reggie, and the way Spencer was speaking out on behalf of the players. I think that was really dope.”

Another unique aspect of the show Ballers is their emphasis on character development. Each character grows in both their personal and professional lives. London Brown’s character Reggie was no exception to this aspect of the show. Reggie grew from being seen as a leach to Donovan Carter’s character Vernon, to learning the financial game and branching out to spear head initiatives like leading the Esports division of the sports agency in the series called Sports X.

When asked if he was into gaming Brown replied, ““I am old school. As far as new games, I don’t really play them like that. If I do it is going to be a fighting game like Street Fighter. My favorite game, which I am going to own at some point, is Ms. Pac-Man. Keep me right there, that is about as much gaming that I am going to do.”

Actors do an amazing job of being people who they are not when they are filming TV shows and movies. They do such a good job that viewers may believe that this is how the actor is in real life. There is certainly a great deal of difference between Brown and the character he portrays.

“I think me and Reggie are alike as far as our loyalty to our friends,” Brown explained. “If you are my friend I’m going to hold you down and I am going to look out for your best interest. That is what Reggie was trying to do even though in the beginning he didn’t know how to do it. He was a little immature about it, but as the seasons progressed people were able to see Reggie’s heart and intent all along. As an actor it was great that it took him awhile to develop because it made things interesting for five seasons and not lost in the sauce.”

Brown also added, “We differ in our maturity level. Reggie was cursing people out and wilding out at parties, and that is not my style at all, I am real lowkey pretty and chill. Our differences is what made the character Reggie fun to play, because I got to be outside of myself. It like when people who don’t drink, drink and drinking allows them to loosen up; that is how it was for me on the character side, it allowed me to loosen up and I enjoyed that experience.”

Acting is not an easy profession, but Brown most definitely could have been able to act the role of Reggie without being a sports fan.

He added, “As far as the Super Bowl I wouldn’t even know because I haven’t been watching. I catch highlights every now and then. As far as the NBA I am pulling for the Lakers until we are out. Once my team is out then I kind of lose interest a little bit.”

Brown believes the state of basketball is healthy right now. “I do like all the major changes they did in the NBA,” he expressed. “It is definitely going to be a lot more competitive with the big threes they got going on in the league. They needed to shake it up the NBA got kinda stale for a while. This offseason finally brought back some energy back to the league and I am looking forward for the season to begin.”

Unfortunately, Ballers is coming to an end on Sunday. For fans it is satisfying to see how everything ends but it is also sad at the same time. Brown spoke on what fans should expect from the finale without giving any spoilers. He also expressed how his experience with the show has been.

“I really don’t know because we shoot the show out of order and we don’t get any special previews or screenings,” said Brown, chuckling. “I don’t know what’s going on, its new to me like it will be new to the fans who watch it. Also, I still need to go sit down and watch the show, because on Sundays sometimes I’m busy working comedy clubs. I still need to catch up on season three. This might be broad, but I think that some of the relationships get dissolved and the audience can expect a lot of chapters closing.”

Brown added, “My experience with Ballers has been a blessing, just to be on a hit show for five seasons. This show has been a great launchpad as far as my introduction to a bunch of people who were not familiar with me before. As a career move Ballers was a great jumpstart, I have no complaints about it. The surprising part of my journey was discovering the range of people who watch the show. There are people involved in politics to people who don’t speak English who watch. The barriers that it has been able to cross between nationalities, countries, races, and ages was phenomenal. I’m glad a show like this was able to create a moment of unity.”

The film industry is like the sports industry in many ways. Just like athletes have to try out for teams actors have to audition for roles. Also as Brown alluded to, films act as a bonding agent to bring people together, the power of sports has this same effect on people. Towards the end of the interview, Brown spoke about the projects he has going on and coming up in the future.

“In a couple of weeks is start filming a horror film,” Brown revealed, “There are a few other things that are supposed to come out next year. I did this project called Bronzeville, directed by Laurence Fishburne and Larenz Tate. It is a series about Chicago in the 1940’s. I played a ruthless gangster in this series. There is always something down the pipeline and I have been fortunate and blessed to have work come to me.”

Plenty of opportunities are on the horizon for London Brown, whose love of sports and acting came together in his current role on the HBO hit Ballers. The worlds of acting and athletics may seem quite distant, but in their hearts they are both centered around the idea of finding things that resonate with die-hard fans and casual viewers alike.