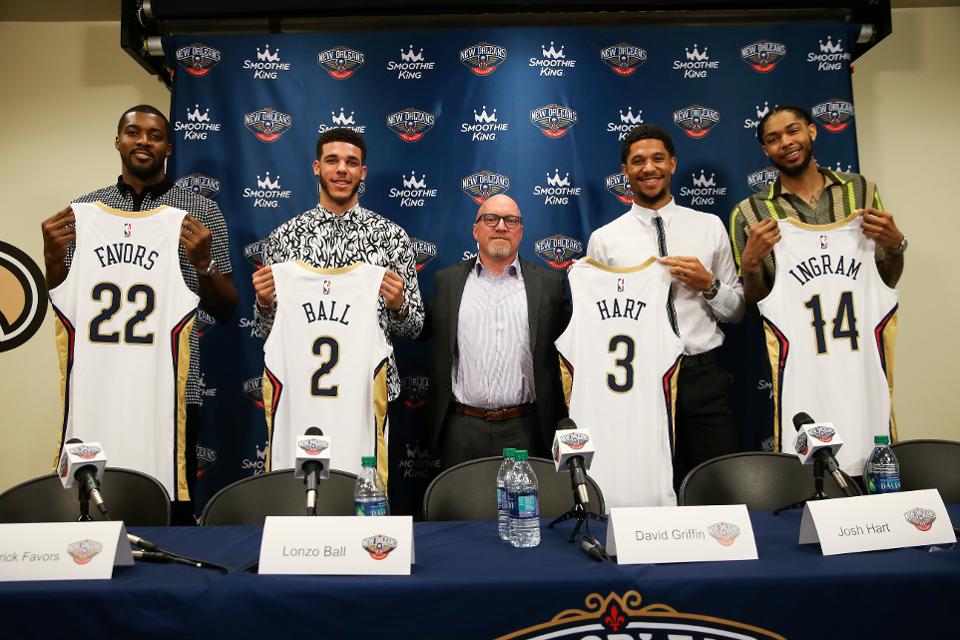 Last Season: The Pelicans finished the 2018-19 season amidst a flurry of disappointment, disarray, and dysfunction, to put it mildly. Finishing at 33-49 was a tough disappointment for head coach Alvin Gentry and for the City of New Orleans, as well. After all, there was hope and promise after a four-game postseason sweep of the Portland Trailblazers just a year earlier. But the disarray cam after the courting of Anthony Davis by LeBron James and the Los Angeles Lakers. The failure to contain that disarray fell on the shoulders of former general manager Dell Demps, who was dismissed as a result after spending nearly a decade with the team. Ultimately, fans grew disenchanted with Davis for seeking the mid-season trade, which fell through despite the Lakers offering nearly 65 percent of their roster.

Transactions: The ultimate acquisition for owner Gayle Benson was landing David Griffin as the team’s Executive Vice President of Basketball Operations. Griffin, well respected around the NBA, was brought on board to turn the team’s fortunes around and brought some of the luck he had with him in Cleveland on draft night as the Pelicans fell into the No. 1 slot and drafted Duke’s Zion Williamson. Griffin was also able to get Texas’ Jaxson Hayes who was picked at No. 8, Virginia Tech’s Nickeil Alexander-Walker (No. 17), Brazilian small forward Marcos Louzada Silva at No. 35, and even Tennessee’s Jordan Bone, though he traded Bone to Detroit. Then Griffin reached out to Fenerbahce (Turkey) big man Nicolo Melli to the tune of two years and $8 milli. As if that weren’t enough, Griffin pulled the trigger on the aforementioned (attempted and aborted) Laker trade, sending Davis to L.A. for Lonzo Ball, Josh Hart, Brandon Ingram, and picks. In the interim since, he’s picked up Derrick Favors, Jahlil Okafor, and J.J. Redick from free agency. Obviously with a standing roster of 20 currently, some will be pared down – but what a problem to have.

Title Hopes: Obviously, though an impressive transitional rebuild on the fly doesn’t translate to immediate title hopes; but one can’t fault The Big Easy for the excitement that Williamson and Griffin have already planted in their hearts.

I expect the team will win 54 and lose 28, and I’m being an optimist, of course. The dominant beast that Williamson was at Duke will be a tougher transition than people think, but he should get rid of any butterflies before Christmas Day. It will also take time for Jrue Holiday to mesh with Williamson the way he did with Davis. That position itself may still be a gamble, depending on how well Griffin, Gentry and Williamson sway Holiday.

I believe that a couple more moves are certainly on the way, but that the New Orleans Pelicans can be back in the Western Conference playoff picture this season, likely No. 6 or 7, and that any talk of championship may be at least 3-4 years out.

Tragic Flaw: Time may be the Pelicans’ biggest obstacle, in the “win now” mentality of the NBA. (Thanks, Golden State). I feel they have about a 3-4 year window, but with the “new balance” of the NBA thanks to Kawhi Leonard’s shift and the elephant in the room – aka tampering – said window may be short-lived, at best. Making Holiday happy or finding out if you can or cannot is something that Griff will have to determine in short order for the Pels to be successful. Once that’s established, and your lineup is set, it’s go-for-the-throat time. Tough to do when 10-15 of the league’s teams have the same mission and firepower that you do. Time to see who makes the most of what they have.

Tracy Graven is a Senior NBA Analyst for BackSportsPage.com and has covered the NBA for 17 years.