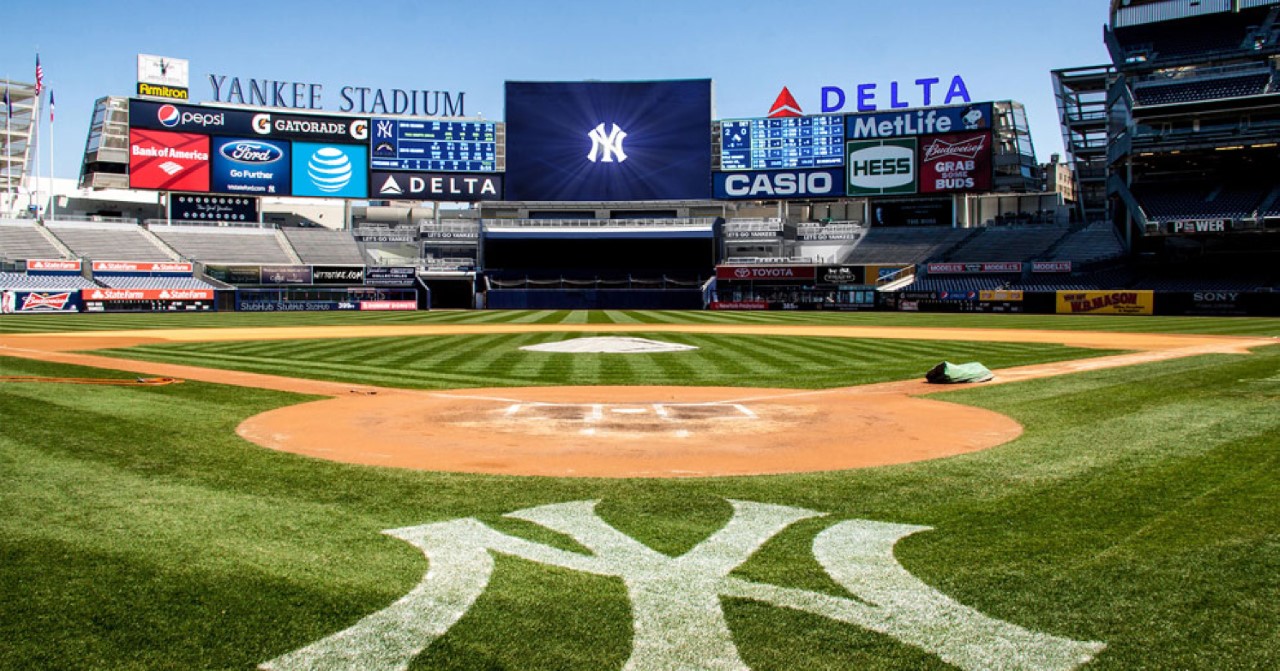 Note: These stats were taken on August 30th and if unsure about any specified stat please use the key.

However, the 2018 Yankees were still successful thanks to many breakout players. The Yankees originally had Neil Walker and Brandon Drury start at second and third, respectively. Then Miguel Andujar and Gleyber Torres came along and did nothing short of placing second and third in the Rookie of the Year voting. Also, Aaron Hicks (27 HRs, 90 R, 79 RBI, 4.9 fWAR), and Luke Voit (15 HRs, .322/.398/.671 in 47 games) led the way to October baseball. Also, Happ proved to be an amazing asset for the Yankees and was arguably their best starter after the trade deadline (7-0, 2.69 ERA, .217 BAA, 1.05 WHIP).

Ultimately, the Yankees lost to the Red Sox in the ALDS in four games, including a very memorable home run to Brock Holt (who then completed the cycle) from none other than catcher Austin Romine. The Red Sox ended up winning that game 16-1, and it’s still a sore spot for many Yankee fans. Yet even after a 100-win season, and setting an MLB record with most homers in a single season (267), one question remained: how could the Yankees catch up to the Sox, and make their first World Series in a decade?

Transactions: The Yankees almost instantly answered that question by fleecing the Seattle Mariners of their ace James Paxton–one of the hardest throwing lefty starters in the game. Also, the Yankees brought back some memorable names from their 2018 run including CC Sabathia (1/$8m), Brett Gardner (1/$7.5m), Zack Britton (about 3/$39m), and J.A. Happ (about 2/$34m). The Yankees then bolstered their bullpen with the signing of Adam Ottavino (3/$27m), as well as their offense with the DJ LeMahieu signing (2/$24m) and the Edwin Encarnacion trade. Lastly, the Yankees made some underrated minor trades to receive Mike Tauchman (trade from the Rockies), Cameron Maybin (trade from the Indians), and Gio Urshela (trade from the Blue Jays).

The results of these signings became imperative to the Yankees’ success in 2019 thanks to seemingly every Yankee player getting injured at some point this season. Fortunately, the majority of the signings have paid off incredibly well for the Yankees. Re-signing 2018 studs in Gardner (18 Hrs, .819 OPS, 110 wRC+, 2.9 fWAR), and Zack Britton (2.18 ERA, 0.50 HR/9, .187 BAA) was a great move by General Manager Brian Cashman. Bringing along Brooklyn native, Adam Ottavino (1.53 ERA, 12.32 K/9, 0.63 HR/9) proved helpful too. Furthermore, LeMahieu (23 HRs-new career-high, .202 ISO, .919 OPS, 4.9 fWAR) shut down all grievances for not being Manny Machado, and Encarnacion proved to be another big bat in the Yankees lineup (9 HRs, 27 RBIs, and .824 OPS in 36 games). Even Paxton who has been up and down this entire year has proved better as of late; he has his best ERA (3.57) in a month since March/April, and batters are just hitting .645 OPS against him in August.

Title Hopes: The Yankees are elite top to bottom, offensively. Torres built upon his third-place ROY finish with an even better year. Meanwhile, Sanchez proved himself to be one of the best catchers in the game, and Gardner still proved himself as a starting outfielder. For years the Yankees had problems with runners in scoring position, but that has all been erased by Gio Urshela and DJ LeMahieu. Also, Aaron Judge and Didi Gregorius are starting to find their groove just in time for Voit, Encarnacion, Hicks, and Stanton’s much-anticipated return.

Their bullpen has been elite, to say the least. The Yankees some of the five best relievers in the game in Aroldis Chapman, Zack Britton, Adam Ottavino, Tommy Kahnle, and Chad Green with Dellin Betances waiting in the wings.

Rotation wise, Tanaka and Paxton have found their groove at the right time, whereas German is highly likely to start in the playoffs as well. Also, pair Sabathia with an opener (looking at you Chad Green), and the Yankees have themselves a pretty decent rotation. Oh yeah, there is also Luis Severino, the biggest X-factor on the Yankees title run, and has placed top-ten in the AL Cy Young award from 2017-2018. So, at least on the surface, the Yankees are set top to bottom.

Tragic Flaws: The biggest keys to the Yankees winning the 2019 World Series are how the injured players will do when they return and how the starting rotation matches up with other contenders. The Yankees need Severino to show off his ace-like form upon return and they sure could use Betances as another shutdown reliever in the ‘pen. As mentioned the Yankees have done exceptionally well with runners in scoring position this year, but will the dynamic change when strikeout and home run hitting prone players such as Hicks, Voit, Stanton, and Encarnacion return? Only time will tell.

Even at the most ideal outcome where the Yankees starting potential playoff rotation of Luis Severino, Masahiro Tanaka, James Paxton, and Domingo German (in that order) are at their very best, they still might be worse off than the Astros and the Dodgers. The Astros sport Justin Verlander, Gerrit Cole, Zack Greinke, and Wade Miley, whereas the Dodgers have Hyun-Jin Ryu, Clayton Kershaw, Walker Buehler, and Kenta Maeda. Verlander, Cole, Ryu, Kershaw, and Buehler are all likely to place in the top-ten in their Cy Young voting this season, and the Yankees don’t have a pitcher close to that caliber this year.

Other under the radar flaws include the walks given up in the bullpen. The Yankees have several relievers with a horrendous BB/9 (Chapman-4.01 BB/9, Britton-5.03 BB/9, Ottavino-5.37 BB/9), and Betances himself has an awful BB/9 (3.51). While all these relievers are still amazing effective, the postseason is an entirely different season; the biggest flaws escalate on the biggest stage. There’s a reason to worry as the Yankees have blown 22 saves this season, and that number can certainly increase against the best teams in baseball.

Lastly, the Yankees’ pitchers are terrible with runners on base. Their relievers rank 29th in baseball in CS% at 11.11%, and their pitching as a whole rank 18th in baseball with a CS% of 25.32%. Teams that run well, such as the Houston Astros, Chicago Cubs, Los Angeles Dodgers, and Atlanta Braves can have success against the Yankees. While there still are plenty of homers in the playoffs, teams are clawing and scratching for runs more often during October. Thus, postseason teams are more likely to steal bases and move over the runner. As a result, any team with any decent baserunners (which is essentially every contender) can very possibly test the Yankees on the basepaths during the playoffs.

Although the Yankees have very tangible flaws, they are still among the top-three teams in baseball. They overcame injuries to pretty much everyone on their roster this year, and have some of the most comeback victories throughout the majors. This is a team that doesn’t give up. This is a team that with their backs against the wall, will keep grinding for the win. No other Yankees team in the last decade has that type of mindset that is consistently shown on and off the field. The Yankees excel in so many areas, and although the two months can very well be difficult for New York, anybody would be considered a fool to count the Yankees out.

fWAR: Wins Above Replacement from Fangraphs. For example, If a player has 0.1 fWAR they are worth 0.1 wins more than a replacement-level player (0.0 fWAR). During the halfway mark of a season, a starting player with 1.0 fWAR is an average starter.

Cy Young: The award for the best pitcher. There is a Cy Young award in the AL and NL.

CS%: Caught Stealing percentage; The percentage at which runners are thrown out trying to steal a base. MLB average: 26.32 CS%