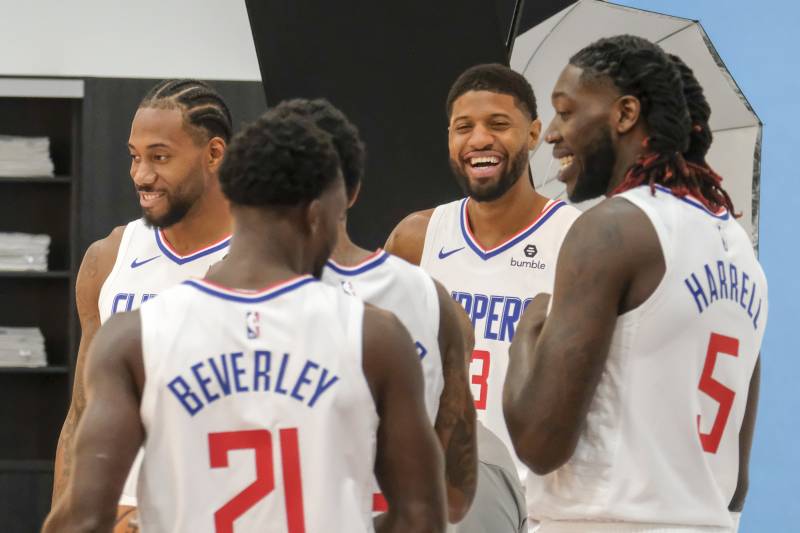 There was an air of confidence exuding from the players at Clippers Media Day 2019. It was not cocky or chauvinistic, but rather an unspoken confidence the whole team shared knowing they were among the elite rosters in the NBA. The days of the scrappy, underdog Clippers from last year are over. Patrick Beverley summed it up best when he explained that he knew this team was not going to sneak up and surprise anyone this year. They will have a target on their backs all season, which is what happens when you land two superstars like Paul George and Kawhi Leonard. This team seemed more than ready for the challenge.

Defense. That was the most talked about attribute of this team, a sentiment that was echoed by almost every player who took the stage. Paul George took a second and thought about the talent they have when it comes to defense.

He even singled out Patrick Beverley and said it will be energizing for the team watching him hound players the full-length of the court. George is an elite defender in his own right as well and Kawhi’s defensive talents are no secret, as he is a two-time Defensive Player of the Year. This Clippers teams’ perimeter defense is the stuff of nightmares. It is still to be seen how their interior defense and rim protecting holds up.

A recurring topic of discussion at Media Day was the ways in which this new look Clippers team bonded in the offseason. The two incoming superstars have been in a texting group chat with their new teammates since they signed with the Clippers back in July.

“That relationship was established early. We came into the facility and it was like I knew them, like I’d been around these guys,” Paul George explained.

There were two summer bonding events that players kept referring to: the fishing trip and the paintball outing. The fishing trip was touched on by several players, a fun deep sea fishing outing that turned competitive as players strived to catch the biggest fish. The paintball outing was highlighted by a shirtless Patrick Beverley, who, according to Ivica Zubac, shot players both on the opposing paintball team as well as his own.

“Classic Pat,” Zubac chuckled. This type of bonding is great to see for a team that is welcoming in several new faces.

All in all, this Clippers team seems like they have all meshed in a relatively short amount of time, which will be important as the Western Conference is as crowded as ever. Every game will be important when it comes to fighting for the top seed in the West and there will be very little time to go through growing pains. Let’s hope this comradery shows up on the court when the Clippers face hometown rivals the Los Angeles Lakers on opening night October 22.