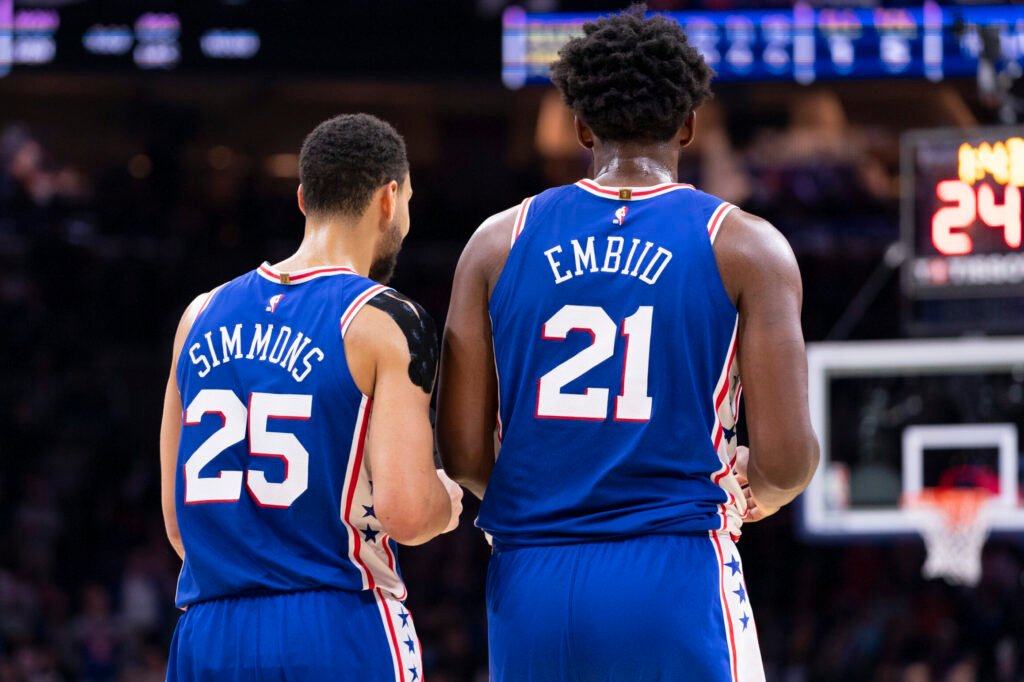 It’s hard to call the first half of the Philadelphia 76ers’ season anything but a success. 24-12, first in the East. But it’s too early to celebrate. After all, after 36 games last year the Sixers were 23-13. That season ended in disaster. Still, despite the similar records things are very different. The 76ers this time are coming off their best win of the year, defeating the full strength Utah Jazz, owners of the best record in the NBA. There is hope afloat in the City of Brotherly Love, and for very good reason. Here’s Part 1 of the Philadelphia 76ers’ Midterm Grades.

How could it be anything else? Joel Embiid has ascended to another level. He’s always been a top center, but various injuries and perhaps fitness issues have held him back. Last year, Embiid’s placement in the current NBA center rankings was at an all-time low. Nikola Jokic was seen as a no-brainer pick over Embiid. Bam Adebayo was the young gun poised to take over the league like Embiid once had. Rudy Gobert was the best defender in the league, who could perhaps one day join the ranks of the best defenders in NBA history. Embiid had fallen to the wayside, not even making the All-NBA team for the first time since his rookie year.

Embiid heard y’all talking. He came into this year determined to take over, and take over he has. He went from perennial All-NBA threat to MVP front runner. Against the best team in the west and Gobert, Embiid dropped 40 points and 19 rebounds, including a pull up three in the dying embers of the game to tie it and force overtime. Earlier this year against the Chicago Bulls he dropped a career high 50 points on 65% shooting. By the way, he also had 17 boards,  five assists, two steals and four blocks. Complete domination.

What’s behind Embiid’s rise? One easy answer is fitness. Embiid was often visibly tired going into the 4th quarters earlier in his career. Not so much this year. He’s dominating late in games, often putting teams to bed by himself, or orchestrating comeback efforts.

He’s still playing great defense, as well. More importantly his offense has taken the extra step. His mid-range game is lethal. Opposing defenders have to give him acres of space or he blows right through them for the and-1. Embiid is now taking advantage of that space better than ever. He’s shooting a fantastic 51% from 10 feet to the three-point line. One of the most common things you’ll see in a 76ers’ game is Embiid facing up on a defender 15 feet out, jab step, jab step, fade away, swish. The other most common thing? Embiid going up strong, getting fouled and sinking free throws. He’s first in the league in free throws per game, and he’s shooting 86% on them, up from his career percentage of 80% flat. Stopping Embiid one-one-one just isn’t possible right now.

Which leads to another major improvement of his game. He’s better than ever at recognizing double teams and getting the ball to the open man. Against the Indiana Pacers a week ago, he had back-to-back possessions where he received the ball, got doubled and rifled a pass cross court to an open Furkan Korkmaz who proceeded to drain it from deep. Embiid doesn’t just pass to open shooters for three either. He has also been taking and making threes himself. The three-pointer has always been a part of Embiid’s game, but never like this. He’s shooting a crazy 41% from deep right now. He’s also taking tough shots (like against the Jazz), taking and making shots like a man half his size would. Look at this ridiculous step-back. So Embiid has been unbelievable. What about the other Sixer stars?

Embiid has taken a leap, we can see that clearly. On the other hand, Simmons has been much closer to the same. Good thing the same is an All-Star level player. He’s averaging near identical numbers to what he has been for the past few years, chipping in 16.1 points, 7.9 boards and 7.6 assists per game. All that while playing All-Defense level D on the opposing team’s best wing. He also still can’t really shoot the ball. However, overall stats don’t tell the whole story. Simmons had a bit of a slump in the first two months of the season. In February and March he’s been much much better.

In his ten games in February, Simmons averaged 21 points on 61% shooting, a much improved offensive output. That includes his career high of 42 in Philly’s first meeting with the Jazz. One marked improvement to his game is his free throw shooting. He shot 70% from the line in February, 10% higher than his career average. This may just be a hot month for Simmons, but if he can keep his numbers near February levels that’s 20/8/8 on 60% shooting with the best wing defense in the league. That’s an All-NBA player to me.

Just six months ago Tobias Harris was not a popular figure in Philly. He criminally underperformed in the playoffs, leading to a sweep by hated rivals. His max contract was seen as one of the worst deals in the NBA. Sixers fans had to watch in despair as Jimmy Butler, who they “chose” Harris over, made the NBA Finals. Fast forward to now and Harris is a bona fide star, with many calling him an All-Star snub. He’s scoring 20.2 points per game on scorching hot 51/40/89 splits, one scant percentage point from joining the vaunted 50/40/90 club that features names like Steve Nash, Stephen Curry and Larry Bird.

The 76ers don’t need Simmons to carry the scoring load, because Harris gives them that second scoring punch. Most importantly, Harris can be counted on when it matters. Against the Utah Jazz, it was Tobias Harris who took over in overtime, not Embiid or Simmons. Attacking a mismatch one-on-one, Harris scored eight straight points to give the Sixers the lead for good. Harris, reunited with his old Clippers coach Doc Rivers, is playing with confidence, making quick decisions and scoring for fun. He’s also averaging near career high boards and career high assists, and playing the best defense of his career. Living up to his max deal was thought to be a pipe dream, but Harris has done that in the first half of 2020-2021.