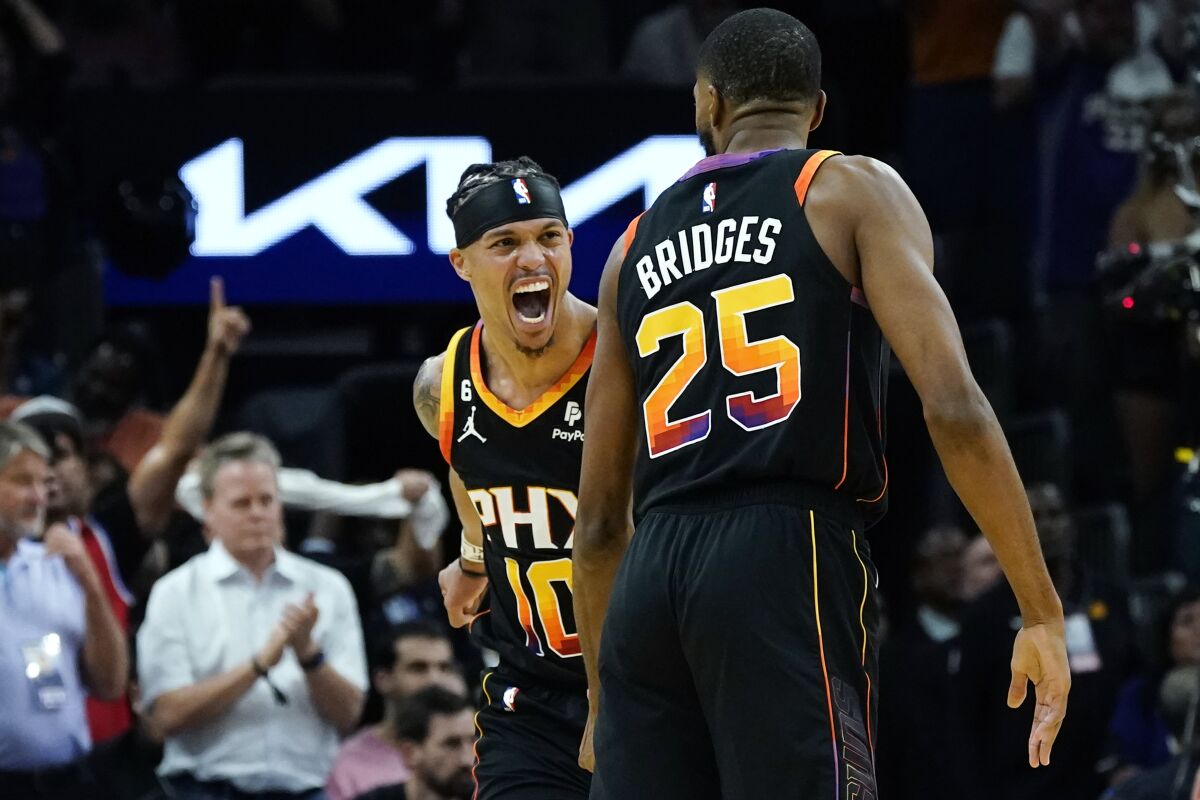 The Phoenix Suns erased the footprint of last year’s playoff performance, overcoming a 22-point deficit to defeat the Dallas Mavericks 107-105 on opening night.  The Suns were heading towards another meltdown at the Footprint Center, scene of the 2022 Western Conference Semifinals beat down and at the hands of the same team.  Once again, both Luka Doncic and Spencer Dinwiddie had their way, with the help of newly acquired center Christian Wood.  Deja vu struck another stunned sell-out crowd as fans witnessed what seemed to be a continuation of Game 7.

That made the 22-point rally that much sweeter.

Devin Booker collected 28 points and 9 assists to lead the Suns on an injured ankle.  However, newly acquired guard and NBA champion Damion Lee stole the show by hitting three huge 3s in the fourth before knocking down the game-winner. Doncic finished with a game-high 35 points, missing a 34-footer to win the game, though he was also a team-worst -16.

Haunted by his 17-minute playoff performance, Deandre Ayton reversed the narrative in what looked to be a redemption game.  After only playing seven minutes in the first half due to foul trouble, Ayton illustrated how one can get a double-double just by lacing up the sneakers.  Ayton showcased his dominance as a low-post scorer, sealing multiple defenders under the rim while also being used as a roller in the pick-and-roll.  In only 30 minutes, Ayton finished with 18 points and 10 rebounds on 8-for-11 shooting from the field.  Nearly all 18 and 10 were impactful, most of which came during the third and fourth quarter rally. The Booker and Ayton tandem may finally be coming to fruition as Ayton looks to take on a bigger offensive load.

Devin Booker earned his current contract money in dominant fashion, even assuming some point guard duties when Chris Paul went to the bench. Booker checked back into the game with the Suns down 15 and then had seven of his 28 points and six of his nine assists in the fourth quarter. That’s what superstars do.  They put the team on their back.  Booker is an all-around superstar and shouldn’t be classified as just a “shooting guard.”  One can expect Booker to put up career numbers in assists this coming year.

Before leaving the game with leg cramps, Johnson finished with 15 points on 6-for-13 shooting (3-of-6 from three) with three rebounds and a pair of blocks.  The opener marked the first time he tipped off a season as a full time starter.  Johnson looked aggressive on offensive, proving that he isn’t only a stand still shooter. On the defensive side of the ball, Johnson must be able to improve as a rebounder and perimeter defender.  According to NBA.com, he gave up a total of 17 points, nine in which came from three.

Cameron Payne and Damian Lee both played extended minutes down the stretch, impacting the game on both sides of the floor.  The real question remains: Do the Suns have anyone who can sustain consistent play on a nightly basis?

Without Landry Shamet, the Suns combined for 27 bench points.  Damion Lee led the way with 11 points.  Jock Landale scored seven points, but was on the bench for most of the second half due to his four fouls.  Dario Saric, Bismack Biyombo, Torrey Craig and Josh Okogie all saw the floor with little to no production.  Torrey Craig led the four in minutes, only playing nine.  As for Lee, he was the difference-maker.  His brother-in-law, Stephen Curry, was so proud, he posted a video and woke his kid up at the same time.

Now if the Suns can get the rest of their bench guys to buy in and commit to winning in a role like Lee has, their bench issue may not be as bad as some expected.