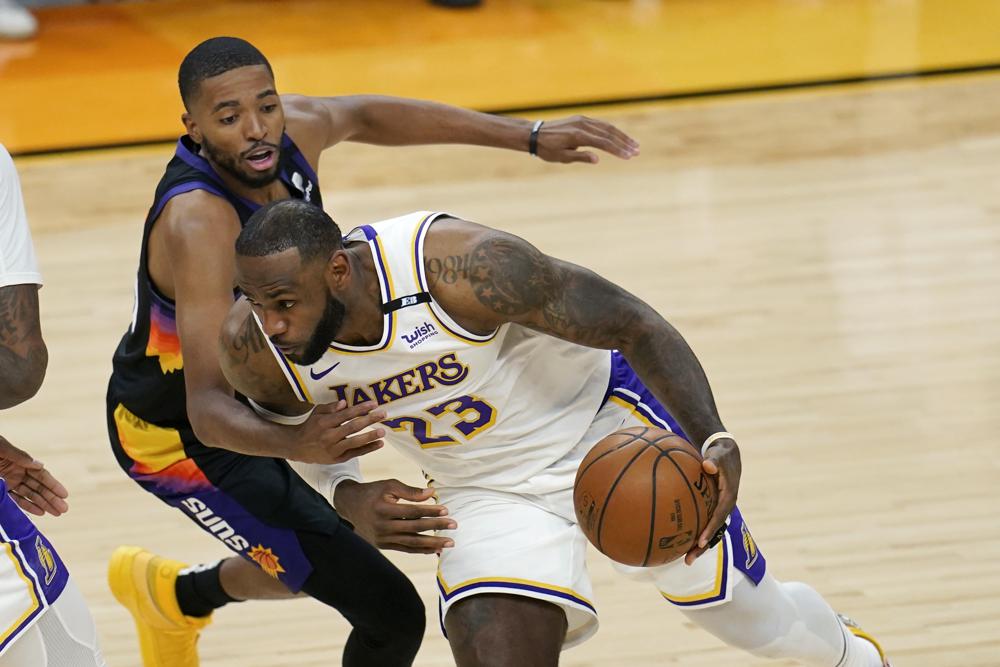 After a disappointing loss to the Phoenix Suns, there is still optimism for the Los Angeles Lakers to turn things around. Going straight to the root, the Suns simply had more urgency throughout the game. It was evident that Phoenix came out to prove a point to the defending champs. Not to mention that many believe that Los Angeles will come out on top in this round one matchup. However, there are a few quick fixes Los Angeles can make in order to take control of this first round matchup.

AD Needs To Be Better Against Phoenix Bigs

It’s no surprise that a main reason for the Lakers’ loss came at the expense of Anthony Davis’ performance. AD went for 13 points, seven rebounds and two blocks, he also shot a terrible 5-16 (31%) from the field, 0-2 from three and three-for-five from the free throw line. This isn’t the first time that Davis has had a poor outing in a game one playoff matchup. What makes this such a disappointing game for Davis is his lack of assertiveness. Throughout the game Davis looked relaxed and waited for something to happen instead of getting a bucket. What also shows his lack of aggression were his free throw attempt numbers. Five free throw attempts is unacceptable for a player of Davis’ caliber, especially in the postseason.

“There’s no way we’re winning a game, let alone a series, with me playing the way that I played,” Davis said after finishing with 13 points, 7 rebounds and 3 blocks. “So, I mean, this is on me. I take full responsibility, for sure… Usually, I come out the gates very dominant, and I think tonight, or today, we had it going. So, I kind of just got lost in the offense. But I still have to be assertive and find ways to get the ball.”

If we go back to last year’s playoffs, Davis had a poor game one against the Portland Trailblazers. Davis had 28 points and 11 boards but came at the expense of 24 shot attempts as well as 17 free throw attempts. Davis shot 30% from the field and 70% from the line that game. However, it was in Game Two where Davis dominated everyone in his path. In game twoDavis went for 31 points and 11 boards shooting 13-21 on the field as well as 3-4 from three. All signs point toward the sense that Davis will indeed come back stronger for game two against Phoenix Tuesday night.

If Frank Vogel did anything well last postseason, it was his line up changes he made during the series. This all depended on who Los Angeles was playing at the time. Thanks to the amount of depth the Lakers hold, they can go big or small any time. The ideal scenario is going small where Davis plays the center and has space to operate.

When asked about what adjustments can be made for game two, Frank Vogel replied with, “There’s plenty we can do. I’m not going to go into detail of what our adjustments are going to look like. But certainly we can do a better job with the attention that he (Davis) is drawing.”

Clogging Up the Paint

Now to the Andre Drummond situation the Lakers have, the experiment hasn’t worked like many believed it would. Although Drummond has shown his worth in games such as the ones against the Utah Jazz and Brooklyn Nets, he doesn’t fit well with Davis. When playing alongside Davis, Drummond clogs up the paint every time on offense. This is bad for the Lakers and Davis because this is where he finds his rhythm. However, with Drummond now in the paint it’s easier for the second defender to come at Davis. This in turns throws off the timing and rhythm for Davis in the post. Hence the reason why Davis is seen out in the perimeter more shooting contested jump shots.

But why didn’t this happen with Davis when he shared the floor with Javale McGee or Dwight Howard last year? This is because both Howard and McGee constantly moved without the ball, whether it were to give space for Davis down low or setting off ball screens to free up wing players. We don’t see this with Drummond, instead he stays on the block in hopes of dump off or a put back.

In game one against Phoenix, it was clear that Drummond did not belong on the floor, again clogging up the paint for drives to the basket, unable to convert from down low, causing unnecessary errors. It could be the jitters got to Drummond but still it is not an excuse. If Drummond wants to become a factor against Phoenix he must do the little things correctly to be more effective.

With Chris Paul hurt, the Lakers have to pay more attention to Phoenix’s young duo of Devin Booker and DeAndre Ayton. In their playoff debuts, the duo combined for 55 points, 23 rebounds and eight assists. This isn’t good for Los Angeles because there is nothing scarier in an NBA playoff game than when young stars have supreme confidence.

That is exactly what Booker did in his 34 point outing in game one. After Paul left the game with his shoulder injury, Book took command of the offense scoring from all spaces of the floor. Not to mention that he was masterful in the pick and roll and dribble hand off situations. But what makes Booker such a threat is his ability to score from anywhere as well as playmaking. LA needs to find a way to slow down his production if they want a chance at winning this series.

DeAndre Ayton, on the other hand, looked like David Robinson in his debut. He was excellent down low as well as on the boards. Ayton finished off the game with 21 points and 16 boards in an impressive debut. However, it was the way he had those 21 points. He was dominant in the paint, powering through Laker defenders, getting easy second chance points or simply rolling off the pick for an easy dump off. If Los Angeles wants to contain him, Davis needs to take the challenge of guarding him and showing Ayton who the best big on the floor is.

The Philadelphia 76ers’ Playoff Rotation
The Man to Man Podcast Episode XXVI: The NBA is BACK!