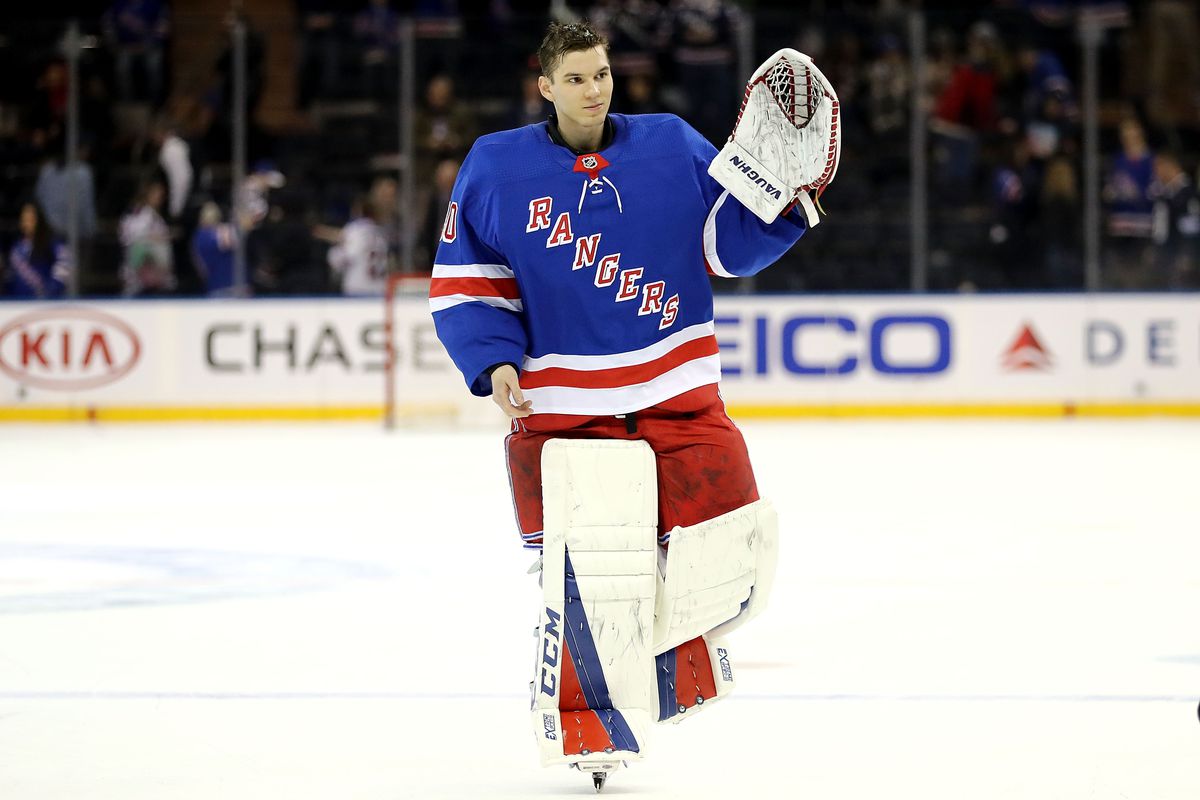 Goaltender Alexandar Georgiev is starting his third year with the New York Rangers this season. The young 23-year-old has proven to be a strong backup to star goalie Henrik Lundquvist. Last season he played 33 games and averaged a save percentage of .914%. Of those 33 games, he started 30 of those, posting a record of 14-13-4. He is the first Bulgarian in the NHL and went undrafted, being signed by the Rangers July 19th, of 2017.

In net, he brings this calm presence and never seems to be nervous in big games. He is a very flashy player with his pads and glove, and his passing ability to his players on the blue line is spot-on. Coach Quinn put much faith into his backup goalie last season. On his birthday last year, he had a record-breaking-game, making 55 saves helping the Rangers to a 4-1 win against the Maple Leafs. Although he is still very young, he as a great mentor in Henrik to look up to and really analyze his game and learn from him.

Georgiev’s story is not like most traditional players aspiring to be in the NHL. He was born in Bulgaria and at a young age moved to Russia. There he played hockey for the Moscow- based Penguins team. From there he moved to Finland and made his debut in the Liiga playing for TPS in 2014-2015. He played three amazing seasons with TPS and hoped to be noticed by NHL scouts. After going undrafted in the 2017 NHL Entry Draft, the Rangers eventually invited Georgiev to a training camp and from there, they fell in love with the kid and signed him to a three-year entry contract. He made his debut in the NHL on February 22nd, 2018 and made 38 saves. His first career win came against the Edmonton Oilers on March 3rd.

“I felt confident. Everybody played a really good defensive game, and I didn’t think too much about who was on the ice for the Islanders.”

During the game, Georgiev made jaw-dropping saves and looked to be in top form. A couple of unlucky bounces did not go his way causing the Rangers to lose 4-2 against the Islanders in their last preseason game. David Quinn was very confident and happy with the play of Georgiev.

“I thought he made some big saves when he had to,” Quinn said of the undrafted goaltender. “He didn’t have a lot of work early, but in the third period I thought they came at us a little bit, had us on our heels a little bit, but I thought he did a good job fending them off.”

Georgiev’s story is one that not many know. His journey speaks to his character and play. He is very calm and confident in his play. His teammates are confident with him in between the pipes. This season looks promising for him as the possible back up to Henrik or splitting time with rookie goaltender Igor Shestyorkin. Whatever his role may be this season, he will surely look to standout, as a tryout for if and when Lundqvist decides to hang the skates up.