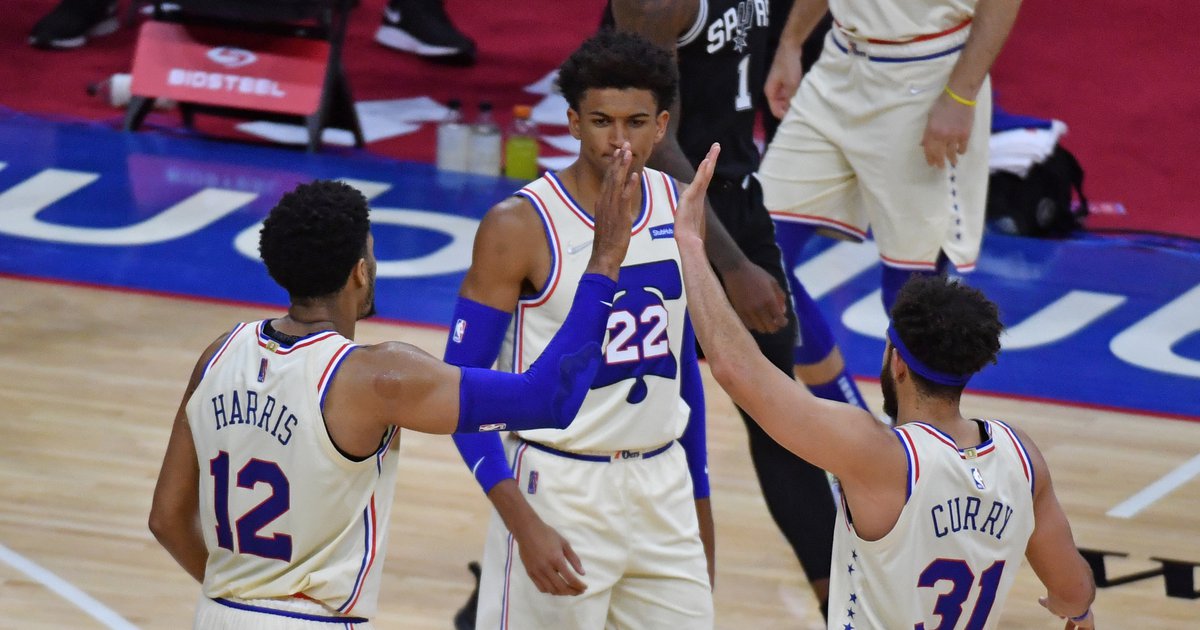 The 76ers are gearing up for their toughest remaining stretch of games. Beating the Brooklyn Nets a few nights ago was critical for their first seed dreams, and right now it’s championship or bust for the City of Brotherly Love. Holding on to that one seed is important, but it’s also important for coach Doc Rivers to continue evaluating what he has on the roster. The rotation tends to change in the playoffs, as starters get increased minutes and the guys at the end of the bench get cut.

During his tenure with the Los Angeles Clippers, there were a couple different rotations Doc used in the playoffs. Obviously it was pretty dependent on personnel, health and matchup, but overall it was in line with most NBA teams. In 2014, he used (players that saw more than 10 minutes per game) nine players, with a big difference between 1-7 versus 8-9. In 2015, Rivers used eight players in the first round and just seven in the second. 2016 saw injuries affect the lineup quite a bit, but he used around 8-9 players. It was a similar story in 2017. 2019 saw eight players with over ten MPG, but the seventh man had twice the minutes of the eighth. Finally, in 2020 Doc used around nine guys in both series.

Looking at the data… there’s not too much to learn. Doc really can use anywhere between 7-9 guys on the rotation, which is standard. The 76ers do have a Big Three that will play in the high 30’s in MPG, but other than that it’s hard to predict. Due to the specialized nature of the team though, I do believe that upwards of nine players can see play.

Shake has been the 76ers sixth-man the entire season. He’s averaging the fourth most points on the team, and the most minutes by a large margin of the bench players. He’s the only one on the bench (bar George Hill who we haven’t seen yet) that can create his own shot and create for others. He hasn’t quite gotten the three-ball down, but his dribble penetration is one of the best on the team.

Barring Hill just being absolutely washed all of a sudden, Hill will see minutes off the bench. He’s got a decade of experience running offenses that Milton just can’t match yet. He’s also a good three-point shooter, which is always important. He shot 46% from deep last year for the Milwaukee Bucks and was often the sixth man during the playoffs.

He’s only appeared in 16 games for the Oklahoma City Thunder this year, but his overall numbers were pretty similar to his Bucks days. His three-point percentage dropped to a still respectable 38.6% and his 3.1 assists per game would be fourth on the 76ers right now. This means the chances of Hill being terrible is low, which means he will be in the rotation.

Thybulle has quickly become one of the best defenders in the league in year two. That should allow him to stay on the floor despite his lackluster offensive output. He’ll be much more matchup and situation dependent than the guys above. There could be games where he sees 15+ minutes and games where he sees seven or less. Against teams like the Brooklyn Nets his ability as the second (or first depending on the matchup) best wing defender on the team will be necessary to slow down one of the three super star wing players that the Nets possess. Additionally, Thybulle has use as a closer when the team needs to protect a lead. It’s very common for Doc to repeatedly sub Thybulle constantly at the end of games just to play defense.

On the other hand, if the 76ers need to chase a lead or there’s not really a wing player they need to stop, there won’t be much reason to play him besides to spell one of the starters for a few minutes. His offensive has been better since the All-Star break (not hard to do considering his dismal start) shooting an acceptable 36.7% from three, which is really his only role offensively.  Still, there are quite a few guys that will space the floor much better than Thybulle. That means he needs the right matchup or game state to see any real minutes.

While Joel Embiid’s fitness has been much better this season, he can’t play 48 minutes a game. Someone will have to give him a break, and so far Dwight Howard has been the man to do it. The only reason Howard is not in the no-brainers section is that during the playoffs guys like Howard can get abused. Howard saw a lot of time during two of the Los Angeles Lakers series, was not played at all against the Houston Rockets and saw very limited minutes in the NBA Finals against the Miami Heat. His lack of spacing and ability to defend outside the paint means in certain matchups he will get picked on. That being said, when he’s in the right situation Howard has been great this year off the bench. He’s crashing the boards aggressively and in general just being an inside force on both ends.

If you’ve been keeping count, that’s four names already, which comes to nine guys. The reason a tenth person makes it into the conversation is twofold. One, Korkmaz is kind of the other half of Matisse Thybulle. Thybulle is a defensive ace, but serviceable (at best) on the other side. Korkmaz is arguably the best overall three-point shooter on the team in terms of size, release, accuracy and just willingness to let it fly. On the other hand, Korkmaz is still a work in progress defensively. He’s gotten much better on that end especially playing passing lanes, but he still gets beat pretty bad at times.

A few months ago Korkmaz being the playoff rotation would’ve been laughable, but he’s really stepped his game up recently. Korkmaz is usually the one who starts if one of the three main shooters (Seth Curry, Danny Green or Tobias Harris) is out. As long as he’s not exploitable on defense, Korkmaz has a role when the 76ers need that extra little bit of shooting or they need to really make up ground. Korkmaz can’t really make plays on his own, but he fits very well next to Simmons. Hill might supplant Korkmaz’s role as a bench sniper, but right now Korkmaz is making a strong case to see time. Just like Thybulle, there will be games where Korkmaz sees a lot of time, and some where he sees little. Thybulle’s skillset is a bit less replaceable than Korkmaz at this moment in time though.

Tolliver is a new addition, but he and Mike Scott will basically fill the same role. They are both stretch bigs, and whichever one plays better down the stretch will probably make the rotation. Normally they wouldn’t have a chance at seeing the court, but Dwight Howard’s limitations do open up an opportunity. Howard is a terrible fit with Simmons, especially when Thybulle is also in. Therefore when Embiid needs a rest there’s a chance that it’s Scott/Tolliver that comes in for certain games or situations.

Unfortunately the signing of George Hill probably killed any small chance Maxey had at being in the playoff rotation. Maxey was always more of a score-first point guard than a distributor, which isn’t really what the 76ers need on their bench unit with Shake Milton around. He’s also not a three-point shooter or a strong defender, so Hill has him beat in the areas of need. That’s not a knock on Maxey, as Hill has been a NBA contributor (often a starter or 6th man) for years while Maxey is just a rookie. Maxey has oodles of potential, but he’s not ready to contribute in the playoffs for a team with championship aspirations yet.

Besides the starters, that’s seven guys that I’ve named that have any chance of being in the rotation. Anyone not here like Isaiah Joe or Paul Reed won’t make appearances without some weird factors or a blowout. Personally, I think the rotation will come down to Milton, Hill and a big, which could be Howard or one of the stretch guys. Then Thybulle and Korkmaz will each see time based on the opponent or game flow. That brings the rotation to nine, a little on the high side. The bench of the 76ers is solid though, and they all have niches that give them worth.