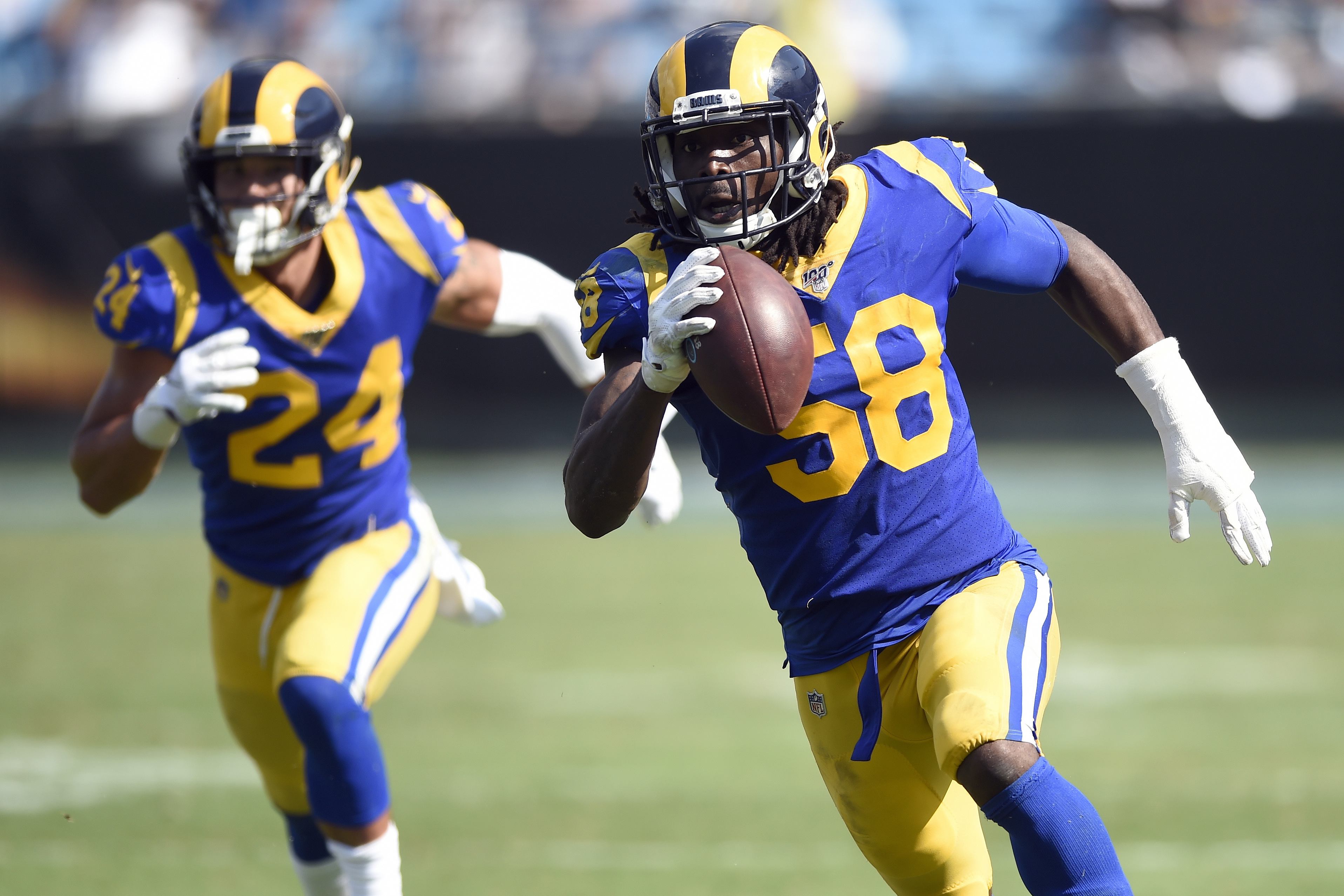 The Los Angeles Rams won their Week 1 matchup on the road against a tough Carolina Panthers team 30-27. It was a relatively ugly game but the Rams were able to grind out a tough win despite the sweltering heat in Carolina. The Rams sat all their main starters during preseason, and it showed in the first quarter as they struggled to get much going on offense. The Rams eventually got going by the second quarter and never looked back after taking a 13-3 lead into the half. The Panthers ended up cutting the lead to 3, but the Rams were able to run the clock out and end the game on their next possession. Overall, it was an encouraging road win as the Panthers figure to be an above .500 team  and the Rams’ passing attack was nowhere near as sharp as it can be.

The Rams appear to be limiting running back Todd Gurley’s workload, a hot topic all off-season due to Gurley’s arthritic knee. Gurley carried the ball 14 times for 97 yards while Malcom Brown carried the ball 11 times for 53 yards, but Brown received a majority of the goal line work and scored two rushing touchdowns. The Rams are trying preserve Gurley this season as they eye another deep playoff run. Last year’s playoff run saw a significant drop-off in production from Gurley stemming from his balky knee. It will be interesting to see how the teams monitors his touches moving forward.

Jared Goff struggled all game, missing wide open receivers on multiple occasions and throwing an interception while trying to force a pass to Robert Woods. Goff also failed to see a wide open Cooper Kupp on several occasions. However, he did throw one touchdown pass to Tyler Higbee. Goff finished 23/39 for 186 yards, one touchdown and one interception. Not great. The offensive line did its part and gave Goff time for most of the day. Goff was only sacked once and hit five times, which is a good sign for the offensive line as the Panthers have a strong group of pass rushers. Bottom line, Goff will need to do better, especially in next week’s home opener against the high powered New Orleans Saints offense. The team will ebb and flow based on Goff’s performance this season, as the run game is almost always strong and head coach Sean McVay is among the elite play callers in football. Hopefully Goff was just shaking off the rust and will be ready to roll next week.

The defense looked strong and was highlighted by a historic performance by linebacker Cory Littleton, who had 14 tackles, an interception and a forced then recovered fumble, the first ever Ram to record that stat line. Have a day, Cory! Aaron Donald and the pass rush were held at bay for most of the game but Clay Matthews did record his first sack as a Ram. Not a bad start to his career in LA. Overall, the defense looked strong and made up for a lackluster showing from the offense.

The Ram’s Special Teams unit is usually among the best in the league but looked a little rusty on Sunday. Punter Johnny Hekker had a punt blocked and kicker Greg Zuerlein missed a field goal; but hopefully this was an anomaly and not a sign of things to come. The Special Teams unit will look to get back on track next week.

In the end, the Rams got the W and that’s all that matters. Next week will be a much tougher challenge against a Saints team that is still fired up over the NFC Championship Game last year and the missed PI call that ruled the headlines after. Two of the best offenses in the league and a revenge narrative should make for an excellent game. Horns Up!