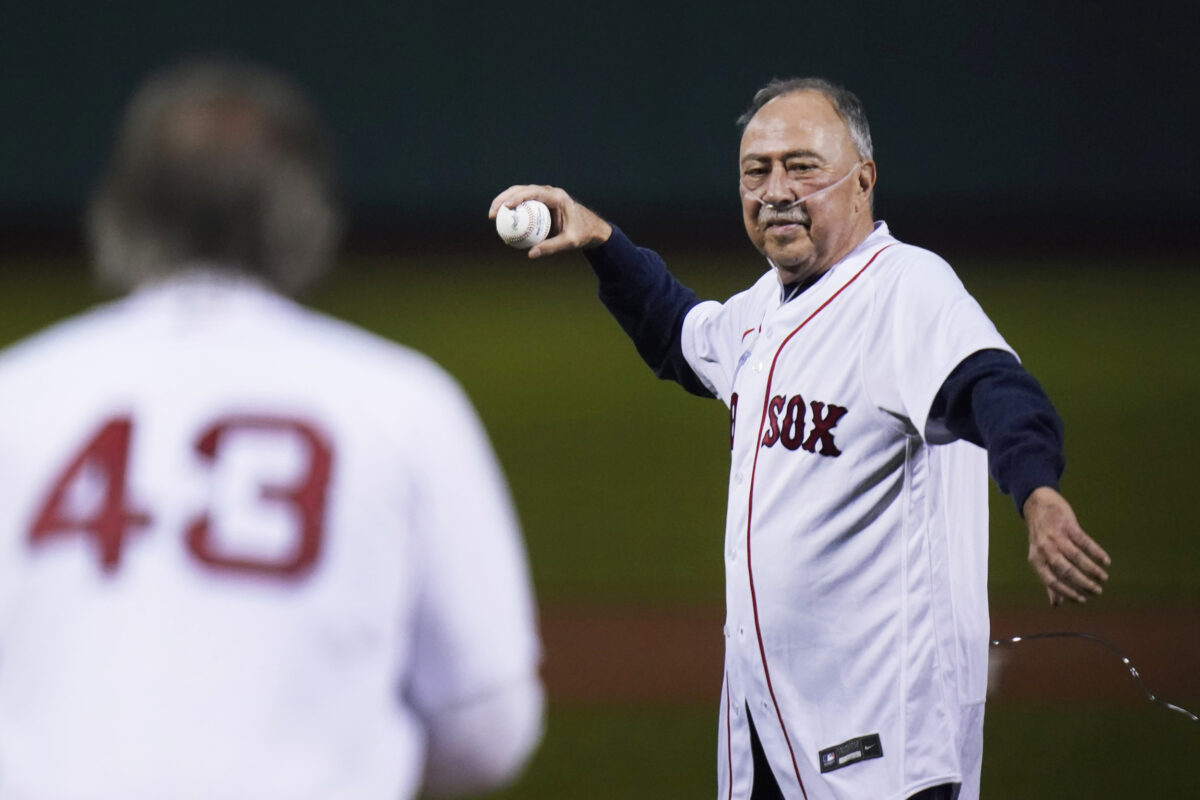 Remy was a former MLB player and beloved in Red Sox Nation as a color commentator on local Red Sox broadcasts.

Jerry Remy passed away on Sunday morning, October 31, after his seventh battle with lung cancer at the age of 68.

But after his playing time, Jerry Remy became famous as a broadcaster on NESN, the regional sports network that shows Red Sox games.  Working as the main color commentator for over thirty years, “RemDog” became a beloved voice in New England.

Paired first with Sean McDonough and Don Orsillo, the two great play-by-play men brought out the best of Remy in the broadcast booth.  A knowledgeable veteran with a strong sense of humor, Remy quickly endeared himself to the passionate Red Sox fanbase.

Before NESN bafflingly let Orsillo go in 2015 (a move viewers still have not forgiven the network for), he and Remy made a dynamic duo who knew how to tell the story of a single game.  They picked the exact right moments for jokes (such as the infamous pizza throw) but rose to the moment if the game or a news storied called for seriousness.

In recent seasons, with Remy’s cancer diagnosis coming back sporadically, NESN promoted Hall of Famer Dennis Eckersley for color when Remy took a leave of absence or needed a day off.  But the two of them worked best together, along with new play-by-play man Dave O’Brien.  With different personalities (Remy laid back, Eck bluntly honest), they played off each other to offer refreshing views on baseball.

When the Red Sox dropped to last place in 2020, NESN ratings unsurprisingly dipped with people having more important things to do during a pandemic than watch a bad baseball team.  But blowout games offer an opportunity for broadcasters to bring up their own topics. During a “meaningless” September match between the Sox and the Baltimore Orioles, Remy and Eckersley both reflected how they did not appreciate their playing careers in the moment.  The exchange was more memorable than any game the Red Sox played last year.

Respected Earned from the Men Up Top

From ownership to teammates to coworkers, Remy had a positive effect on everyone he met.  Here is what some other prominent members of Red Sox Nation had to say in mourning Jerry Remy:

Owner John Henry: “We are saddened by the loss of a beloved player, broadcaster, and 13-year cancer warrior. Jerry’s love and connection to baseball didn’t allow anything to stand between the game and him, including for many years cancer. He devoted his entire career to baseball and whether from his seat in the clubhouse or his perch above the field in the broadcast booth, he took generations of rising Red Sox stars and a multitude of fans along for the ride with him.”

Chairman Tom Werner: “Jerry’s effortless style made him the finest baseball broadcaster of the past few decades. When you listened to him, it was as if you were having a beer with your best friend, and his insight, humor, and charm lifted your spirits. I often texted him between innings to get his perspective on the game, and we enjoyed a relationship I will forever treasure.”

CEO Sam Kennedy: “Jerry Remy was at the core of what I loved about the Red Sox. Growing up, I watched him play as a scrappy second baseman, and later listened and laughed with him as an iconic broadcaster. For the past two decades, I had the immense privilege of working alongside him and seeing firsthand the artful way he connected generations of players and fans with his insight, and often, his humor.”

Alex Cora, who has a worth ethic as strong as Remy: “Like everyone else in Red Sox Nation today, I’m absolutely devastated by Jerry’s passing. We connected because of our love for the game of baseball. I will miss all of our conversations about the game and just passing time together throughout the years, whether in the clubhouse or dugout. Jerry was so passionate about the Red Sox and even though he had to step away for treatment late in the season, he was with us every step of the way—especially in October. We kept in touch just about every day and encouraged each other to keep fighting.”

Xander Bogaerts: “As a player, I always loved seeing Rem in our clubhouse at Fenway every day. He was the first person you’d see when you came in. Whether it was just to say hello or to talk baseball, he was always there. You knew he loved the Red Sox and that he was always pulling for us.”

Carl Yastrzemski: “In baseball he was a very, very hard worker. He made himself an outstanding player. He carried those same work habits over to the broadcast booth.”

David Ortiz, the only one with a bigger personality: “A fun person to be around and incredible human being just left us. We are going to miss you, brother. Thank you for calling me Big Papi on air—l will never forget that. Miss you already, Rem Dawg.”

Dustin Pedroia, similarly short of stature: “I will miss our baseball talks, joking and laughing together, and our friendship. Jerry helped me so much as a young player and I looked up to him. He helped me see the game in different ways.”

Fred Lynn: “I lost a great teammate and friend today. A true gamer and important part of all of Red Sox Nation. R.I.P. Remdog.”

Beloved by His Television Brothers

Don Orsillo: “Thank you for 21 years of friendship. I am nowhere today without you. Showed me the right @MLB way. I know I will text you 3 times a day still. I am lost.”

Dennis Eckersley: “Red Sox nation has lost a beloved icon. I lost a longtime friend, teammate and broadcast partner. He will be remembered for his passion for the @RedSox. I will miss him most for his infectious laugh. Fenway Park will never be the same.”

MLB Network’s Pedro Martinez: “Ever since I laid foot at Fenway Park you were there to call it, feel it and appreciate it. Just like your voice with a great smile, right along with some of the greatest memories in my career in Boston. I’ll never forget how supportive you were towards me and my career, Rem Dawg. Your memories will always live with me, as well as my respect and mutual admiration.”

Sean McDonough: “It’s an awesome thing when you go to work and know you’re going to be part of something good, because the guy sitting next to you is great.  Every night I showed up at Fenway or on the road, I knew this had a chance to be a special broadcast, because this guy next to me was special.”

Dave O’Brien: “Who else sounded like that who was on the air? He sounded Boston.  He never tried to change or hide any of that. He was very proud of where he came from, and I think that’s where it started. He sounded like your neighbor, my neighbor, colleagues, friends, cousins that we grew up with.  The other thing was his love for the Red Sox was completely genuine and honest. He rooted for the Red Sox. He wasn’t a ‘homer’ but it was clear his heart was bleeding for the Red Sox every night”.

Jerry Remy’s last public appearance was just last month.  With Boston hosting the AL Wild Card Game, Remy threw out the first pitch to Eckersley and to a standing ovation.  The Red Sox rode the special moment to an improbable ALCS run, and Remy was with them in spirit.  Jerry Remy was a remarkable man who brought more joy to baseball than most, and he will always be remembered fondly in Red Sox Nation.

World Series Preview: Will the Astros or Braves Best the Odds & Haters?
Behind the Philadelphia 76ers Season High Assists