The Chicago Cubs played the 2020 season with the third highest payroll in baseball at $89.1 million. This figure was prorated to adjust for the COVID-19 shortened season but the $188.5 million the team would have paid in a full season would still have been a significant drop from their $214 million 2019 payroll. Over the last few seasons, Chicago and President of Baseball Operations, Theo Epstein, have made a noticeable effort to cut spending and get under the luxury tax threshold by making few big splash trades or free agent signings. 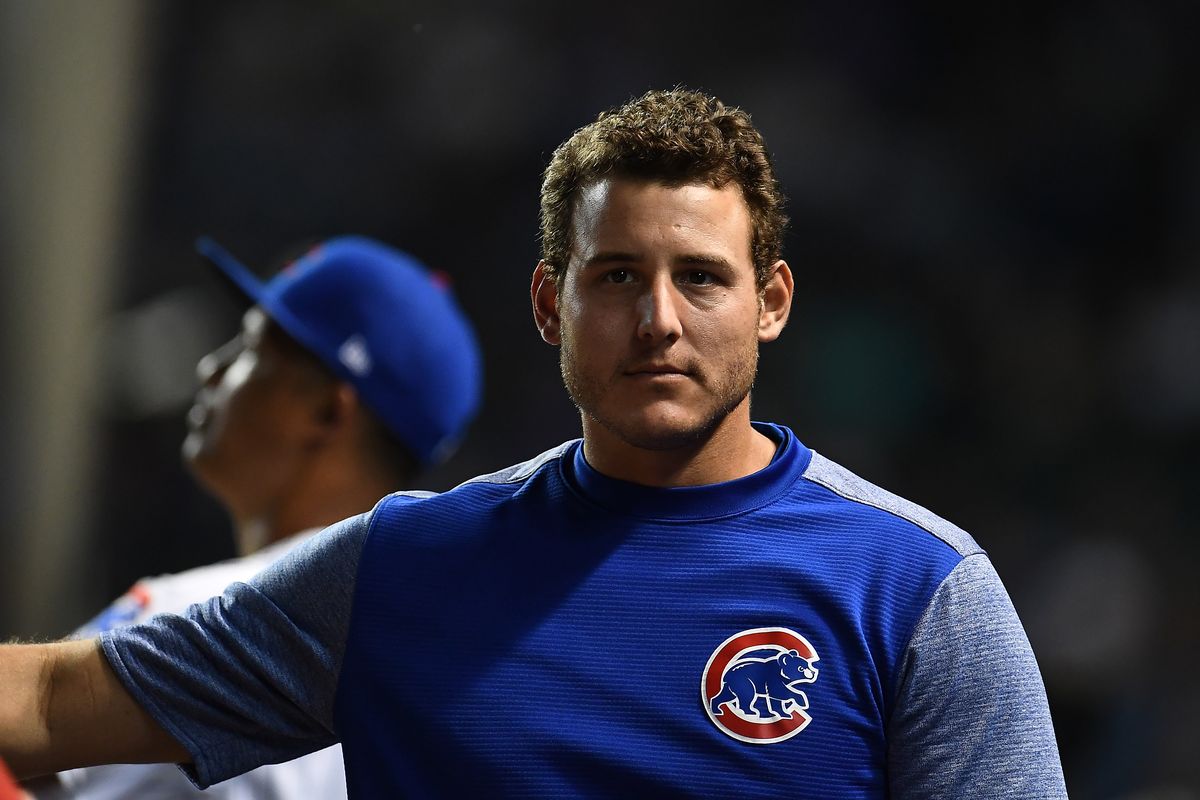 The Chicago Cubs played the 2020 season with the third highest payroll in baseball at $89.1 million. This figure was prorated to adjust for the COVID-19 shortened season but the $188.5 million the team would have paid in a full season would still have been a significant drop from their $214 million 2019 payroll. Over the last few seasons, Chicago and President of Baseball Operations, Theo Epstein, have made a noticeable effort to cut spending and get under the luxury tax threshold by making few big splash trades or free agent signings.

The club’s front office will soon have their budget further tested as star sluggers Kris Bryant, Javier Baez, Anthony Rizzo and Kyle Schwarber each prepare to hit the free agent market after the 2021 season. Despite three fourths of that quartet struggling mightily in the abbreviated 2020 season, it seems unlikely that the Cubs will be able to afford the services of all four players. To make matters more complicated, Theo Epstein will see his own contract expire at the conclusion of the 2021 season. If he plans to leave the team, as many believe he may, will Chicago have to wait until a new leader is in place to move forward from this crossroads? Naturally, the circumstances differ for each player. Let’s take a look at who figures to be a part of the long-term plan fort the north siders.

Nobody can dispute the fact that Bryant has taken a couple steps back from his 2016 MVP season. Nevertheless, all must admit that the third baseman still has plenty of talent left in his 28-year-old bat. Perhaps Bryant’s .206 2020 batting average and unsightly .644 OPS may drive down the price tag for the Cubs’ slugger, but Bryant’s agent, Scott Boras, is typically one of the most aggressive in baseball.

Bryant lost an extend ended grievance prior to the 2020 season, in which he alleged that the Cubs manipulated his service time prior to calling him up in his 2015 Rookie of the Year season. One may wonder if this grievance is a sign of bigger issues in Bryant’s relationship with the team. For what it’s worth, Bryant did say “There’s definitely no hard feelings, so let’s definitely put that that narrative to bed.” Still, Bryant has been the constant subject of trade rumors over the last few years and that could be perceived as a lack of faith in him from the club.

The trade rumors could well come to fruition for Bryant, if the Cubs don’t believe they could sign him long term after 2021. If they do bring him back, it would still likely cost at least in the range of $100 million. With many other needs to fill, the Cubs may be willing to let Bryant walk and use their money offering extensions elsewhere.

A modern-day Mr. Cub, Anthony Rizzo hasn’t been the Cubs’ best player every year, but he has clearly been the most consistent player over his nine-year tenure in Chicago. The lefty first baseman plays Gold Glove defense year in and year out and was awarded as such again this year. He also is incredibly consistent at the plate and typically produces somewhere around a .280 average and a .390 on base percentage with good power and good counting stats.

Rizzo is a steady, well-rounded contributor that makes sense to lock up as a foundation piece. But coming off a remarkably team friendly seven-year, $41 million contract, he may want to cash in on a more appropriate pay day. Like his counterpart in the Bryzzo souvenir company, Rizzo too will likely command at least a $100 million contract, if not more. Perhaps the team will be more willing to commit to Rizzo, given his track record for reliability.

Chicago also lacks many options behind Rizzo, if they were to let him. Victor Caratini has backed him up occasionally over the last few years, but he’d be a significant downgrade. Having David Bote ready to be plugged in at third might be the difference if it comes to Rizzo or Bryant getting paid. Overall, most would probably believe that ultimately Rizzo will be part of the Cubs’ future.

2020 was a lost year for Baez at the plate. Nevertheless, he still managed to play his usual spectacular defense and was finally rewarded with his first career Gold Glove. The flashy shortstop showed that he does still have a lot of swing and miss in his game, but the power in his stroke is equally undeniable. The problem with Baez is that he’s seen a lot of fluctuation in his offensive numbers. His young career has had huge peaks, but it’s also had its fair share of lows, like batting .203 last year.

They don’t put guys on the cover of MLB the Show unless they’re pretty darn good. Most people would agree that Baez still meets that rule. It’s hard to make too many conclusions off of a 60-game season after all. Not to mention, the 27-year-old Puerto Rican is only two years removed from his 2018 second place finish in the NL MVP race. The Cubs could very well build a future around Javy’s excellent defense, powerful (albeit streaky) bat, profound baserunning and general swag.

Baez has the personality of a winner and it will be interesting to see if the front office envisions him becoming a veteran leader. Again, money may make the difference as Baez makes now the third player in the conversation of a $100 million plus contract. Like Bryant and Rizzo, Baez has proven himself as a star player and he will reasonably expect to be paid as such. It seems unlikely that the team will be able to afford all three. Even if they could, would they want to? There’s something to be said about keeping the core of the 2016 World Series champion team together, but that unit has been largely unable to replicate that success in the years since. Still, at only 27 and with clear holes in his offensive game, it’s hard not to wonder what a more polished, less breaking ball-chasing, version of Javy Baez may look like. Will the Cubs gamble to find out?

Many figured Schwarber would be the team’s biggest beneficiary of the universal DH, but Schwarber actually held down left field admirably for most of the 2020 season. Despite these gains with the glove, Schwarber showed that his bat can also be plenty inconsistent. His .188 batting average somehow almost made his underwhelming .701 OPS seem impressive. The 27-year-old power hitter was able to accomplish this by still contributing solid slugging numbers to the tune of 11 home runs.

The good news about Schwarber’s chances to remain a Cub past 2021 is that he doesn’t look to be quite as expensive as the other soon-to-be free agents. Bryant, Rizzo and Baez are more established and perhaps less one-dimensional players. Which isn’t to say Kyle Schwarber can’t make a huge impact in the lineup, on the contrary he has 40 home run upside, he just has yet to prove that he can provide power with a high batting average floor. The best hitters can hit bombs while still getting on base and getting hits at a high rate. Schwarber has been able to do it for stretches, but he hasn’t quite put it all together too extended of a stretch. His 2019 campaign was close, but it’s reasonable to question if the left fielder is a sure thing that you want to pay up to lock down.

Schwarber is still young and has shown plenty of flashes of potential. Whether or not he sticks around in Chicago may well depend on which version of him shows up in 2021. If the left slugger can hit 30 something homers with a .240 plus batting average, he may be able to stick around as the everyday left fielder for something in the ballpark of 4 years and $75 million.

Given these circumstances, Cubs fans may be able to read the writing on the wall and take a guess as to who stays and who goes. As awesome as it would be for all four of these stars to be Cubs lifers, that certainly doesn’t appear to be the most likely outcome. When all is said and done, the Cubs may only be able to afford three or even two of these players. It’s anyone’s guess as to which combination of players that may end up being, but everyone is entitled to their own opinion. Personally, I think we know enough to go ahead and rank the most likely of the four to be extended. Without further ado:

The Theme of UFC on ESPN+ 41: “Hunger”
Why Schroder Is A Good Gamble For The Lakers