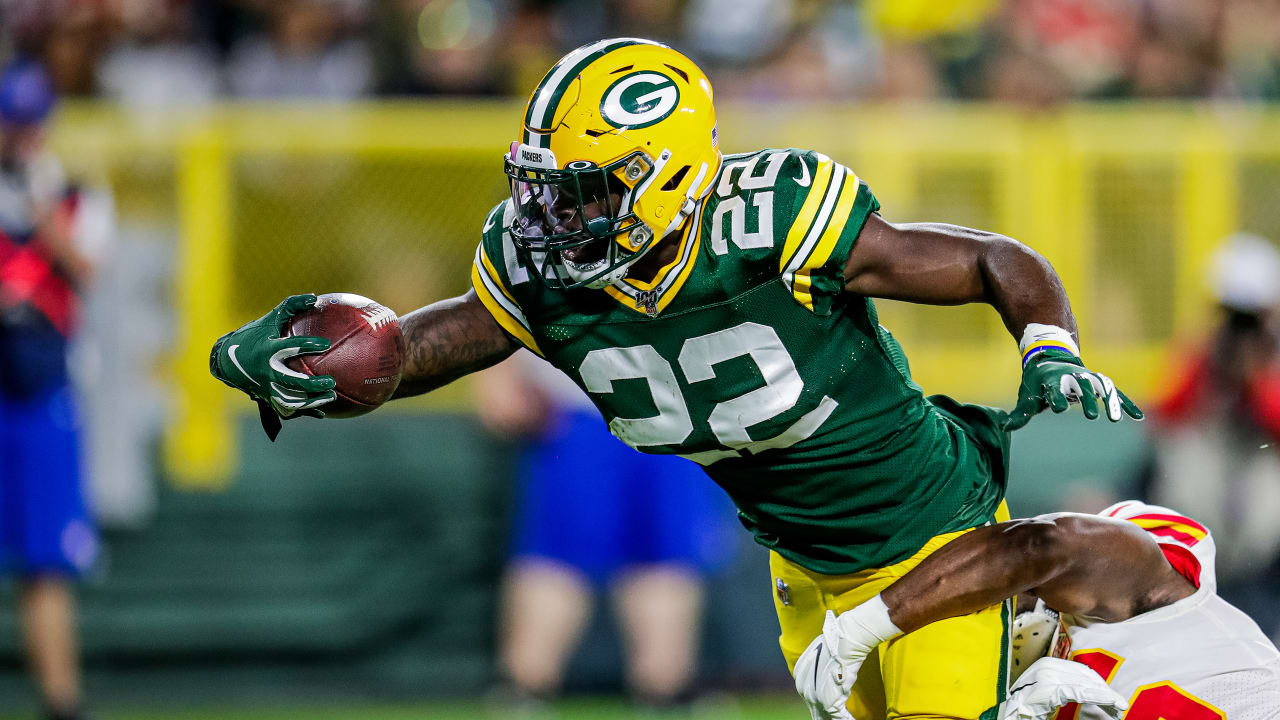 The Packers backfield is already crowded with more familiar faces. The obvious of course being Aaron Jones and A.J. Dillon. Also, you have Kylin Hill, Patrick Taylor, and Dexter Williams still on the roster. It is an uphill battle for the two undrafted RB’s to make the final 53-man roster, but it is not impossible. It is more than likely that Hill is safe to make the roster, but there is a good chance that a 4th RB will be on this roster.

Enter Tyler Goodson and B.J. Baylor. Both of these backs were heavily involved in the preseason opener. Goodson had 12 carries on the ground for 37 yards rushing. He tacked on 2 receptions on 3 targets for 24 yards. Baylor had 7 carries for 19 yards rushing, and 2 receptions on 2 targets for 75 yards, including an explosive 68 yard catch early in the third quarter. Both players made a case to be that fourth back on the roster, and should continue to push for a roster spot this preseason.

The rookie wide receiver room is a bit of a different conversation. I highlighted this group in depth in my previous article if you want to check that out here. The Packers are trying to replace the production of Davante Adams. They have 4 rookies at the position, as well as a new face in Sammy Watkins. Returning to the mix is Allen Lazard, Randall Cobb, and sophomore Amari Rodgers. This will be the group to watch heading into the 2022 season. The four rookies fighting for a role are Christian Watson, Romeo Doubs, Samori Toure, and Danny Davis III. The talk of camp has been about Doubs who has turned many heads. He had an up-and-down game in the opener. He had 3 catches for 45 yards and a TD, including a 33-yard TD reception from QB Jordan Love. Also, he made an attempt at a Superman catch which turned to a pick. He had a drop as well. There was a lot of opportunities for Doubs and he definitely had moments.

The player most people expect to be the primary replacement for Adams is Watson. He is dealing with a minor injury right now, so he did not go in the opener. Toure made 3 receptions for 42 yards in the opener as well. Meanwhile, Davis III who caught 2 passes for 45 yards and a TD made his fair share of mistakes and probably furthered himself from a spot on the 53-man roster. All of these rookies have made some plays, and the production alone is almost identical for the 3 that played in the opener. It will be interesting to watch these guys compete throughout the rest of this preseason.

The Packers OL has some spots up for grabs, and right now there seems like a good chance it will be a rookie starting at one of the guard spots. Jon Runyan should be safe at left guard. Assuming they are both healthy, David Bakhtiari and Elgton Jenkins are locked in at the tackle spots. Sophomore Royce Newman should have the upper hand in the competition at right guard, but rookies Zach Tom and Sean Rhyan both have been impressive throughout camp, and impressed in their debut of the preseason. Rasheed Walker and a few other rookies are still competing for a spot on the roster as well, but I don’t believe they’ll be able find a starting role like the other two are competing for. My current projection would be Tom at right guard, but Newman won’t just roll over, nor will Rhyan.

There are three rookie defensive linemen on this roster. Devonte Wyatt, Jonathan Ford, and Akial Byers. Devonte Wyatt will play a role on this defense, but he is not guaranteed a starting role with Jarran Reed also on the roster, but neither of them played in the opener. Ford and Byers both did not register a tackle in the opener. They will both be competing for a roster spot throughout the preseason. Their competition includes T.J. Slaton, Chris Slayton, and Jack Heflin.

Quay Walker and Ellis Brooks are the only two rookies competing at inside linebacker out of the rookies. Quay Walker is in the front of the line for the starting role next to De’Vondre Campbell, but the depth at the position is strong and a lot of guys are competing for a roster spot. 2021 starter Krys Barnes headlines the group, followed by Ty Summers, Isaiah McDuffie, and Ray Wilborn. Brooks has a real chance to earn a spot amongst this group. He was a great player at Penn State in 2021, and I think he could earn playing time with the Packers in 2022.

His primary competition is sophomore McDuffie, and Summers. On the edge, Rashan Gary and Preston Smith are locked in as the starters, but the rotation behind them is still up in the air. Kingsley Enagbare and Chauncey Manac are the rookies on the edge. Jonathan Garvin, Tipa Galeai, LaDarius Hamilton, and Kobe Jones are the 3 returning to the team in 2022. They will be the primary competition for Enagbare and Manac. Enagbare registered 3 tackles and 1.0 sacks in the preseason opener which will help his case to be the primary edge in the rotation this season. Manac won’t have as easy of a time making the roster after a non-productive opener.

Tariq Carpenter is the only rookie in the secondary for the Packers. This should be a sign as to how deep the team believes they are at both cornerback and safety. Carpenter has a steep hill to climb to make the roster being a 7th round pick, and having the competition he does. There are eight safeties currently at camp, but the good news is that only Darnell Savage and Adrian Amos seem like locks to be on the roster. The other spots seem to be an open competition, so Carpenter has a shot at it. He showed well on the stat sheet with 4 total tackles including three solo tackles in the opener. Right now he would probably be one of the front-runners for a bench role, especially if he can contribute on special teams.

Due to a hamstring tweak in the pre-game, Gabe Brkic was limited on kickoffs, and shanked a field goal in the game. He did make all three PAT attempts, but since then he was released. The team also signed a new kicker after Brkic’s release with Mason Crosby still on the PUP list. They signed former Nevada kicker Ramiz Ahmed, who has had a shaky kicking career thus far. This will be likely one of his last chances in the NFL. We will see if he can make the most of it.

Going forward, there are still plenty of names to watch for. If I was projecting their roster today, one of Goodson or Baylor would likely crack the 53-man roster. The receivers are going to be watched closely anyways throughout the preseason. The OL to watch are most definitely Tom and Rhyan as they compete with Newman for a potential starting spot. Wyatt will be the talk of the town when he debuts this preseason, as will Walker at linebacker. Brooks will look to continue his production as well to see if he can carve out a role.

Enagbare is definitely in good position right now, but it will be fun to keep watching him develop and make a name for himself this preseason. Finally, the safety out of Georgia Tech, Carpenter will be the guy to watch for as he looks to lock up a key role on the bench. This roster has a lot of rookies that are looking to make this roster, and have a role early in their careers. The most interesting thing to watch will be how the Watson vs. Doubs battle works out. They seem to be almost head-to-head competing for a role with such a crowded receiver room.