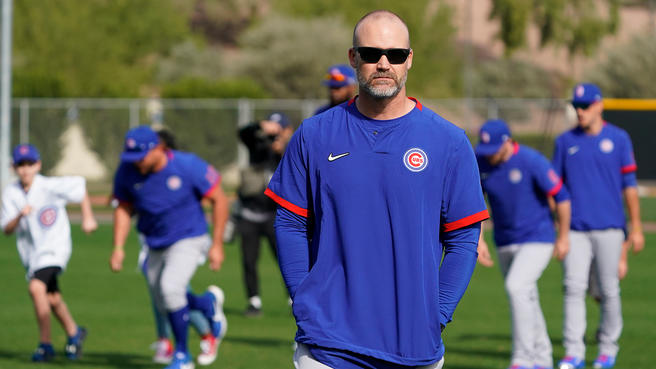 After months of stalemate in tense labor negotiations, Major League Baseball finally began play with two games July 23rd and the rest of the league opening the following day. Amidst the universal DH, empty stadiums, expanded playoffs, new extra inning rule, COVID-19 testing protocols, etc., you may have forgotten that David Ross is the manager of the Chicago Cubs.

The North Siders opened the season at home against the hated Milwaukee Brewers and 2018 Christian Yelich. Despite a general league wide trend of high scoring games, this one would surprisingly turn out to be a pitcher’s duel. The Cubs won 2-0 in nine innings but rookie manager David Ross made a couple of loud statements along the way.

When the National League added the designated hitter, it was widely assumed that Kyle Schwarber would fill the role. After all, people had talked for years about how he was built to DH in the American League, where his glove could be hidden. Critics assume Kyle Schwarber is too fat and clumsy to play the outfield. Well Rossy ain’t buying it.

Why should he? After shedding weight in the offseason leading into the 2018 season, Schwarber has been more nimble on defense. That year he was actually worth four defensive runs saved in leftfield, a statistic in which the positive value indicates he performed four saved runs worth of value above league average at the position. In 2019, he finished at -1 defensive runs saved, meaning he performed one run worse than league average. Not too shabby for a “DH”.

Ross instead opted to get Victor Caratini in the game as the DH. This seems to be more of an offensive minded approach, as opposed to say starting Albert Almora in centerfield, shifting Ian Happ to left and having Schwarber DH. We likely will see some variation of that lineup at some point this season, but Ross giving Schwarber the nod to take the field on opening night may carry some significance.

Every game carries more weight in a 60 game season. Putting Schwarber in the field on opening day against Milwaukee says “you’re my guy.” Love him or hate him, Joe Maddon didn’t seem to ever fully embrace the notion of Kyle Schwarber as an everyday player. With the DH in play, Ross will likely keep Schwarber’s power hitting bat in the lineup just about everyday, but it will also be interesting to see if he continues to give his glove the vote of confidence as well.

David Ross may have tipped his hand to another handful of ways he hopes to differentiate himself from Joe Maddon: How he handles Kyle Hendricks and how he manages the bullpen. When Maddon was at the helm, he almost never left Hendricks in the game for a third rotation through the batting order. He seemed to believe that hitters started to “figure out” the soft throwing, breaking ball wielding, control artist by that stage of the gamel.

Hendricks was electric in Friday night’s opener, striking out nine Brewers while surrendering no walks and only three hits as Ross allowed the ace to cruise to a complete game shutout with just north of 100 pitches. Hendricks allowed a ninth inning baserunner but Ross ultimately stuck with his ace, declining to turn to closer Craig Kimbrel.

Perhaps the longer leash for Hendricks is a product of the shorter season. Or it could have been merely a standout performance that doesn’t necessarily indicate any trends moving forward. One thing is for certain: Chicago is going to need more performances like this one if they’re going to be competitive in 2020. The starting rotation still has a lot of questions to answer, especially with Jose Quintanta on the shelf and Alec Mills joining Tyler Chatwood on the back end. The Cubs bullpen also looks to be pretty shaky, which will mean elite starts like the one Hendricks turned in will be even more important to collect.

The David Ross era is upon us. Will he be a breath of fresh air to a team that appears to have gone stagnant after their success in 2016? With 59 games left in the next 65 or so days, we may find out sooner rather than later