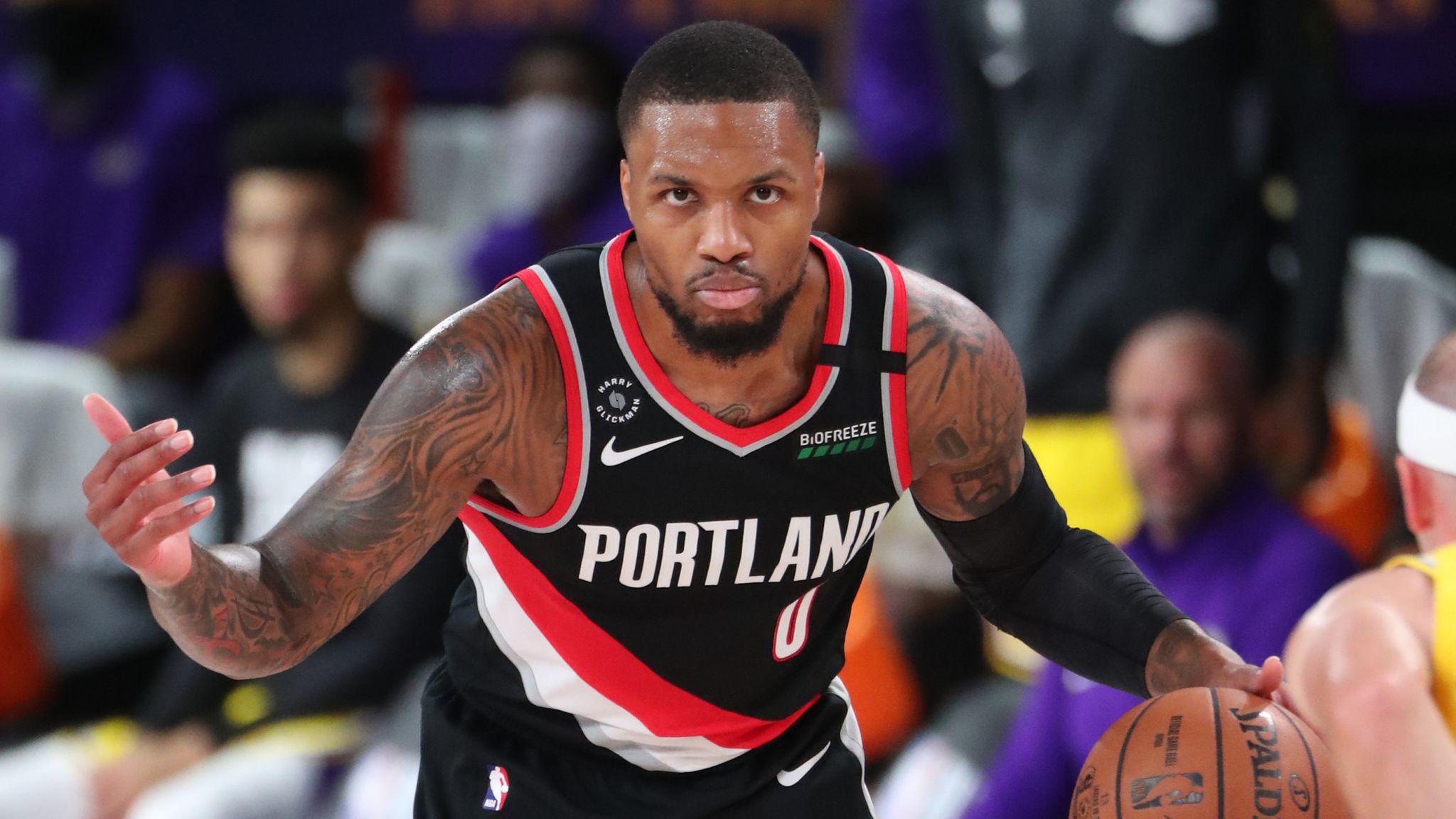 Damian Lillard and the Red Hot and Rollin' Portland Trailblazers invite - even encourage - all comers to get a little taste of Rip City.

Unlike the first night of the NBA Playoffs, there were plenty of upsets last night in Orlando, none bigger than the Portland Trailblazers coming in and laying waste to the Los Angeles Lakers.

The Lakers have had their eyes on the prize all season long since acquiring Anthony Davis (28 points, 11 rebounds in the loss), but so have the league best Milwaukee Bucks, who looked anything but against the Orlando Magic.

James Harden and the Houston Rockets are about the only team that took care of business as the Oklahoma City Thunder played as if they didn’t belong, while the Miami Heat turned it up against the short-handed Indiana Pacers.

The only team that is even close to having home court advantage in these disjointed NBA Playoffs just took it away from the team that worked its ass off all season to have the best record in the league and enjoy home court throughout the NBA Playoffs and NBA Finals.

They did it behind a career high performance from center Nikola Vucevic, who dropped 35 points and 14 rebounds to lead the Magic to a semi-improbable victory. Semi- because last year they defeated the Toronto Raptors, 104-101, in Game One of that series, the only game they would win. The Raptors would go on to make the Magic vanish into thin air in four straight games on their way to an NBA Championship run.

Question is, can they beat the East’s best team again and show that they’ve grown up since 2019?

Let’s let them revel in this win for a little while longer though, and celebrate that Vucevic got some quality help from its bench, with Terrence Ross and D.J. Augustin scoring 18 and 11 from the pines, respectively. Augustin also had 11 dimes.

A few of the other starters combined for 41 in support of Vucevic’s effort, with Gary Clark and Markelle Fultz clocking 15 points apiece and James Ennis III adding 11.

The Magic’s defense clamped down as well, holding Giannis Antetokuonmpo without a field goal in the game’s final 11 minutes. Antetokuonmpo would lead the Bucks with 31 points and 17 rebounds, but got little from his usual sidekick, Khris Middleton.

Khash Money was anything but yesterday afternoon, shooting only 33.3 percent on what touches he did get, netting just 14 points. Middleton had been averaging 20.9 a game up until last night.

George Hill was about the only production off the Milwaukee bench with 16 points. The Bucks got 15 from Eric Bledsoe, 10 from Wesley Matthews, and unlike the Bucks’ last three games in Orlando, where he led the team in scoring, Brook Lopez was basically a non-factor with a measly five and four.

This time of year is coming up on hunting season, and the Orlando Magic got an early start and a quick kill. Milwaukee could find themselves down 0-2 if they don’t get it together. But I suspect we see a four-game flush, just like last year.

Any notion that the rivalry between Jimmy Butler and T.J. Warren is “dead,” just got the Easter treatment – resurrected last night as Butler’s 28 point stat filled performance led the fifth seeded Miami Heat to an ‘upset’ win over the fourth seeded Indiana Pacers.

Warren, and teammate Malcolm Brogdon, each logged 22 points in the Pacers’ loss, not exactly the scoring machine we were treated to in the first four games of Indiana’s eight game seeding schedule in the bubble.

But it wasn’t all just about Warren and Butler. The Pacers lost Victor Oladipo to an eye injury (scratch) eight minutes into the game. He had four points off four free throws before getting grazed in the eye by Jae Crowder. Ironic, as he was coming off a minutes restriction going into the game. Justin Holiday came off the bench for 11 points, while Myles Turner was a frigid nine and nine.

Butler led all scorers, and Goran Dragic wasn’t far behind with 24 points. Bam Adebayo had 17 and 10, and had an unbelievable layup that literally came out of nowhere. Tyler Herro came off the bench for 15 points on 55.6 percent shooting. The Heat shot 49 percent to Indiana’s 47.

The Pacers raced out to a 33-27 lead after one, but sputtered in the second and fourth quarters, giving up 10- and 11-point advantages, and giving away the game, which was 81-80, Miami, going into the final period.

Throughout much of the first half, the Oklahoma City Thunder didn’t act like they felt they belonged on the court with the professional athletes of the Houston Rockets. A 39-25 run by Houston in the first 15 minutes of last night’s game was akin to watching one of those BLM/Antifa ‘peaceful protests’ in Portland on social media.

People just like to watch things burn as they gawk in amazement … like the Thunder in the first half of Game One against the higher seeded Rockets, stuck in a quagmire of mismatches.

Surprising, because it’s the reverse of what the Thunder have done this season, making others’ jaws drop in what they have done with the roster they have. The Thunder stripped it down when they sent Russell Westbrook to Houston and Paul George to Los Angeles. Then went out and damn near took Houston’s No. 4 spot in the playoff seeding.

Yet they only made 10 of their first 29 shots in the first quarter and a half, while Houston hit 50 percent behind a rejuvenated Eric Gordon, who was once traded for Chris Paul (who was traded for Westbrook) – someone must have shown him his $56 million contract.

By the end of the third quarter, Oklahoma City was down 21 points and James Harden had already begun cooking like it was a holiday weekend with an open expense report, scoring buffet style. He had 27 points after three with 50 percent shooting, en route to a game high 37, and all of this with Westbrook seated like a spectator.

It was another former Thunder player who stood in Westbrook’s place beside Harden. Jeff Green seemed rejuvenated, kicking in 22 points, while Gordon had 21 on the night.

The Rockets seemed to be able to shut down the vaunted guards of the Thunder. Shai Gilgeous-Alexander was held to nine points, Dennis Schroder had six, and Darius Bazley went only nine and nine.

Hopefully the Thunder come prepared on Thursday night, otherwise all their progress over the season was for naught. I’m sure the Phoenix Suns watched this game and thought they’d have put forth a better effort than this.

It’s been talked about, predicted, even desired in some circles – the Portland Trailblazers upsetting the Los Angeles Lakers. And here it is – just as we predicted. The Lakers in an 0-1 hole.

And that’s with one of the most complete and beautiful triple double packages I’ve ever seen from LeBron James. Twenty three points. Seventeen rebounds. Sixteen assists. What more could you have asked from the man?

Whether you’re a fan of LeBron James or not, he did the best he could do against this Red Hot and Rollin’ (yeah, I said it – all respect to the Schonz) Blazers team, who are laser focused on a mission to get back to the Western Conference Finals and hopefully beyond.

Statistically, and beyond James, it was an ugly game on paper. Neither team shot particularly well with Portland at 39 percent and the Lakers with an even uglier 35 percent on the night. Even with Jusuf Nurkic back this year, and healthy, the Lakers won the battle of the boards by five (55-50) and cleaning the offensive glass by a 17-5 margin. So how the hell did they lose this game to a sub-.500, late blooming eighth seed?

With no one to contain him, Damian Lillard shot 42.9 percent overall, 46.2 percent from downtown, and made his way to the line, hitting on all 10 of his trips there. Meanwhile, the Lakers tried going downtown 32 times, finding all the three point shops had already been looted by the Blazers, only connecting five times on the night. They never thought to go inside.

Thank Nurkic, who stood his ground in the paint with 16 points and 15 rebounds in his NBA Playoff debut. C.J. McCollum added 21, and Carmelo Anthony finished with a quiet double double off 11 points, 10 rebounds.

These two teams have faced one another six times in a first round playoff series. The last time these two teams faced each other was on January 31st of this year, when Lillard dropped 48 on the Lakers.