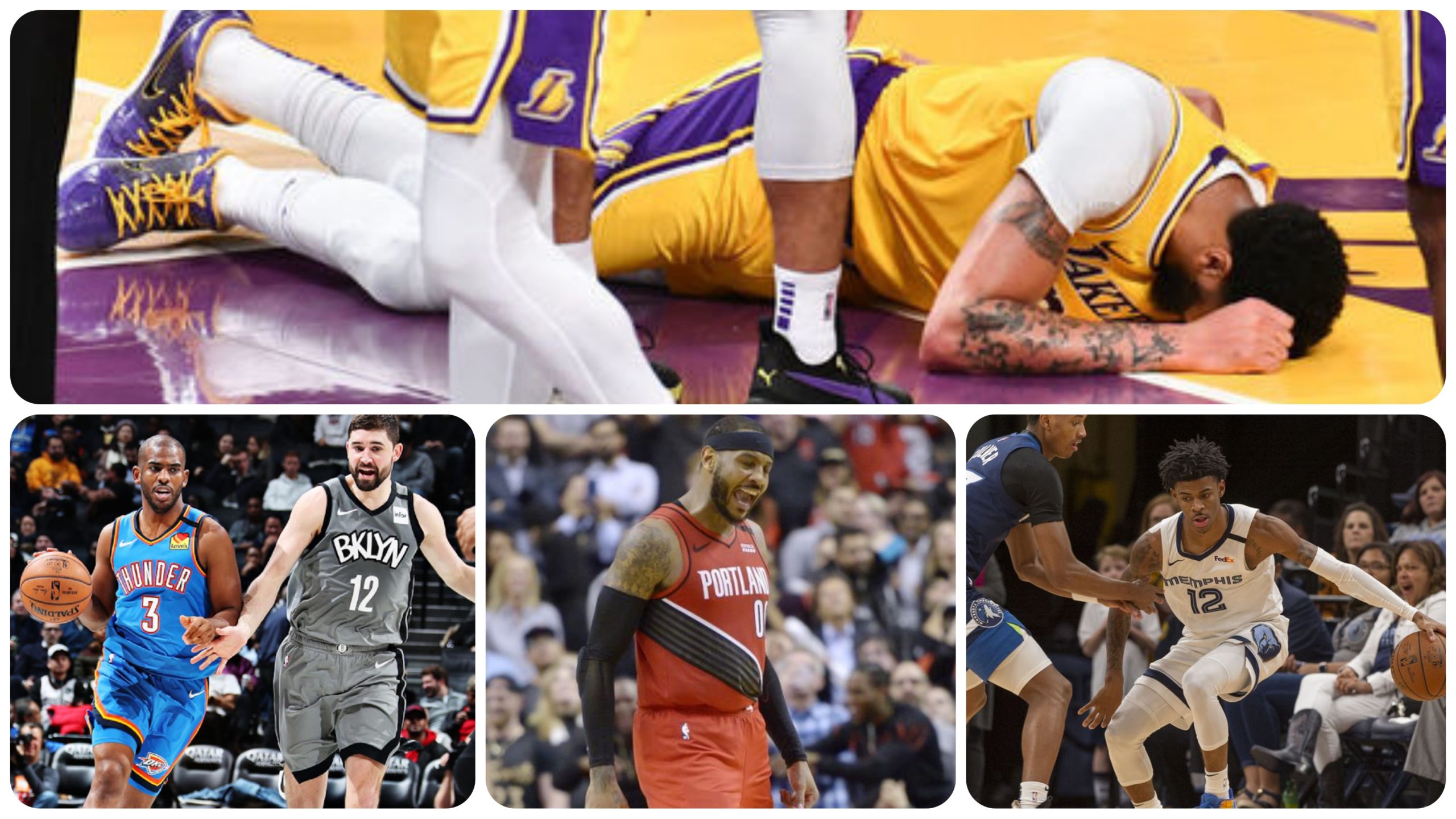 The Lakers got a big scare, but not from the Knicks; Chris Paul showing his value in OKC, Carmelo Anthony downs the Raptors, and The Grizzlies are awakening from Western Conference hibernation.

The Rundown is back with six games from last night’s slate of action.

I had to step away for three days for a family emergency, but I’m back and saw some great last minute action last night as well as some big fourth quarter runs.

A rose by any other name would smell as sweet. Last night, that rose was Derrick Rose, who hit a game winner with 27 seconds remaining last night in Cleveland to close out their most recent road trip with a victory over the hapless Cleveland Cavaliers. Rose led the Pistons to their 14th win of the season, despite 30 points from Kevin Love, who seemed to understand that it’s he and the other Cavaliers that dictate wins, losses, and frustrations, not Koby Altman. A 31-18 fourth quarter surge by the Pistons put them in the position for Rose to hit the game winning bucket. These two teams square off again on Thursday in John Beilein’s first return to the state of Michigan since he was hired as the Cavs’ head coach.

NEXT GAMES
Cleveland at Detroit – Thursday

Six … five … four … splash! That’s what the Toronto Raptors saw and heard as Carmelo Anthony hit the game winning shot last night up North as the visiting Portland Trailblazers stole a win at ScotiaBank Arena with Anthony’s bucket the lone margin. The Blazers are 5-3 when Anthony score 20+ points. Anthony also seems to be having an influence on Hassan Whiteside, who had another impressive double double after being talked about as trade bait.

NEXT GAMES
Raptors at Hornets – Tonight
Blazers at Timberwolves – Thursday

There are 160M reasons that Chris Paul is in Oklahoma City at the twilight of his playing career. And while he can count all of those reasons at the bank, the intangibles are why Oklahoma City is paying him those countable reasons. Not only is he giving Shai Gilgeous-Alexander and Dennis Schroder stellar mentorship, but he can also drop 20 of his 28 total points in the fourth quarter and overtime to put the Brooklyn Nets away. In fact, after he broke a 103-103 tie, the Nets never scored again.

NEXT GAMES
Rockets at Thunder – Thursday
Heat at Nets – Friday

Though he was the No. 3 guy last night for the Memphis Grizzlies, Jaren Jackson Jr. is developing nicely for Memphis in his second year in the league. Oft teams the team leader, but humble enough to let guys like Dillon Brooks and Ja Morant take the lead, like last night when the trio combined for 74 points overall and pulled a 37-28 fourth quarter run that gave the team its 16th win of the season and has them within reach of a possible playoff spot if they keep playing like they have the past couple of weeks.

NEXT GAMES
Blazers at Timberwolves – Thursday
Spurs at Grizzlies – Friday

How do you counter a 21 point deficit, and a 34 point – 57 percent shooting performance from Devin Booker? You put the ball (and a little faith) in the more-than-capable hands of De’Aaron Fox and watch the Sacramento Kings run up a 36-16 fourth quarter performance on the road and head home with a little more confidence as you prepare for the NBA’s best team on Friday night, that’s how. And that’s how the Sacramento Kings left Phoenix last night after cooling off the Suns.

NEXT GAMES
Bucks at Kings – Friday
Magic at Suns – Friday

This was arguably one of the most predictable outcomes of the NBA schedule. The Los Angeles Lakers got a scare last night, but it wasn’t from the New York Knicks, who folded to the tune of 30 points. No, it was when Anthony Davis went down in the third quarter with a bruised lower back (did I not predict injury would be the only thing to slow this team?). X-rays proved to be negative, so good news there. Also (ironically), Dwight Howard’s contract became fully guaranteed for the remainder of the season, something I felt he earned long before Carmelo Anthony earned his in Portland. The Lakers will be alright – unless LeBron James suffers an injury (knock on wood). But Julius Randle’s return to L.A. as a New York Knick did not go well … and no one expected it to.

NEXT GAMES
Knicks at Jazz – Tonight
Lakers at Mavericks – Friday