Rundown v01.11.20 – Utah Gains Ground, Grizzlies on the Move, What Lakers are Available in Trade? 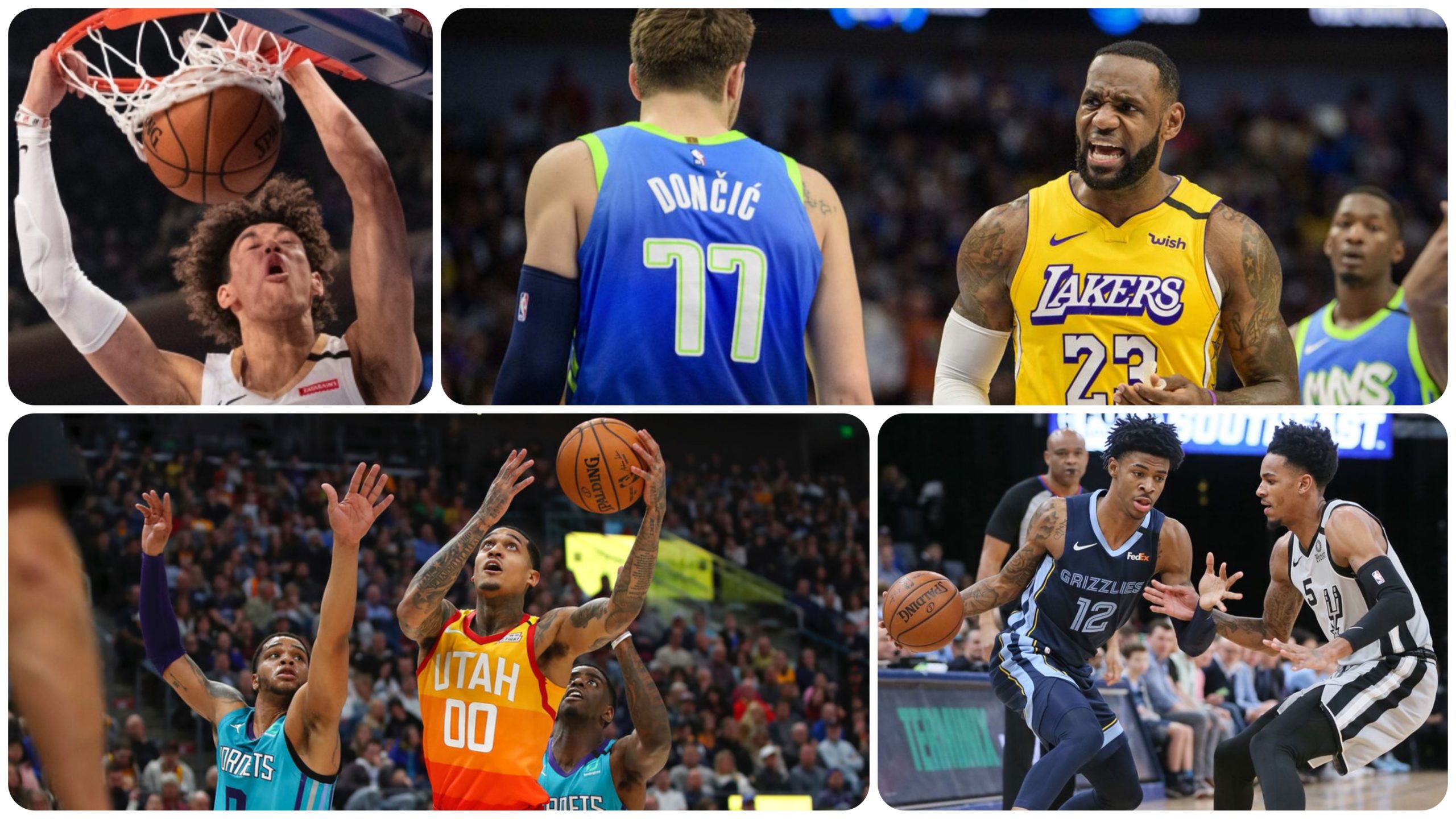 The Lakers take care of business against the Mavs, Jordan Clarkson leads Utah to a convincing win, Morant has been 'Ja' dropping in Memphis' run, and Jaxson Hayes stuffed Kevin Knox and the New York Knicks last night.

While the latest buzz is over Andre Drummond being eyed by the New York Knicks, there are other irons in the fire as the trade deadline approaches in the next few weeks.

There’s still the possibility of a Kevin Love trade out of Cleveland. His desire (and my early season prediction) is for him to go to his hometown Portland Trailblazers. Granted, Love is nowhere near his Minnesota Timberwolves numbers and has languished in Cleveland at best, but that’s not to say that his trade value has diminished. He still has a lot left in the tank for the right situation with the right team. Question is, who wants that $120.4M over the next four years and who does Portland give up to get him? Is Oklahoma City a dark horse candidate?

Speaking of Oklahoma City, does Sam Presti even think about tinkering with what no one expected – a team that has jumped out to an unexpected 22-16 record nearly halfway through the season?

Danny Ainge faces the same quagmire in Boston, although a three game skid isn’t quite the catalyst to get Ainge to start dealing cards … but he’s looking and we’ll have to see if he’s wearing his poker face or is content with the core he has.

The Knicks are certainly keeping an eye on and have a keen interest in Drummond, and I doubt it happens the way I’d like it to (I’d like to see Drummond go to a contender like the Dallas Mavericks, where’s he’d be a difference maker against teams like L.A., who’s beaten the Mavs three times this season), but he may be the next big name swapped. Personally, I’d move Blake Griffin. Phoenix would be a nice destination. I used to wish for him to go back home to Oklahoma, but not with Chris Paul (and their history) there.

And, lastly, just to make it interesting, allegedly every Laker but LeBron James and Anthony Davis is reportedly available.

Go get him, David Griffin. Complete the swap that Dell Demps didn’t. Or let Presti swap out Paul (and his contract) for Kuz, Dwight Howard and DeMarcus Cousins. I also would love to see Presti chase Marcus Morris in the next three weeks.

The Washington Wizards bookended a couple of 30 point quarters on offense and contained Trae Young on defense, limiting the sharpshooter to 19 points and no three pointers (he missed all seven attempts) as the kept Atlanta from its ninth win of the season last night. Washington earned its 13th victory behind #VFL Jordan McRae’s game high 29 points. Bradley Beal missed his seventh game in the last eight due to a right leg issue; Jabari Parker’s shoulder caused him to miss his fourth game for the Hawks.

NEXT GAMES
Hawks at Nets – Sunday
Jazz at Wizards – Sunday

How do you eat the elephant in the Garden? One bite at a time. And that’s just what the New Orleans Pelicans came to Madison Square Garden and did last night, outscoring the New York Knicks by two points, four points, three points and three points to take the 12 point win between two No. 14 teams. New York certainly needs to make a move or two to make any moves up the depth chart, and while I feel Detroit center Andre Drummond should go to a contender, the Knicks feel Drummond will make them a contender. Depends on who they put around him, as they haven’t been a contender for over 20 years. Personally, I’d take a runner on Jaxson Hayes and develop him – but that’s New Orleans’ plan and they way he’s playing, I don’t see David Griffin parting ways with the former Longhorn.

NEXT GAMES
Pelicans at Celtics – Tonight
Heat at Knicks – Sunday

After the Miami Heat rolled out a 42-32 first quarter, the (un)faithful in the Barclays Center began chants in favor of the Heat. That was all the impetus the Brooklyn Nets needed to focus on the task at hand and end their seven game losing streak. The Nets would go on to outscore the Heat 85-71 over the final three quarters and get their 17th win of the season as they hang on to the eighth seed in the Eastern Conference with Charlotte four games behind.

NEXT GAMES
Heat at Knicks – Sunday
Hawks at Nets – Sunday

Zach LaVine and Coby White put on a show for the Chicago Bulls last night in the United Center, but Myles Turner’s coming out party had him setting season highs with 27 points and 14 rebounds, while getting teammates involved and nice bench performances from Aaron Holiday (19), Doug McDermott (16), Edmond Sumner (10-5-4), and Justin Holiday (nine points, six assists) in the critical divisional win.

NEXT GAMES
Bulls at Pistons – Tonight
Sixers at Pacers – Monday

They should change their name to the San Antonio Catfish, as they’ve reeled us in again only to be a dead piece of wood in the end. Memphis head coach Taylor Jenkins obviously knows a thing or two about how to beat his former mentor, Gregg Popovich. For the second time this season, Jenkins and his Memphis Grizzlies have embarrassed the San Antonio Spurs, last night by 13 points. Granted, the season series stands at 2-2, with the Spurs having won by 30 two days before Christmas, but give the Grizzlies credit as they’re (1) on a four game ravenous tear, and (2) they’re ahead of the Spurs in the Western Conference standings, even if it’s .04 percentage points, they’ve got the advantage and may increase that this weekend as they welcome the Golden State Warriors while the inconsistent Spurs travel to Toronto.

NEXT GAMES
Spurs at Raptors – Sunday
Warriors at Grizzlies – Sunday

The Phoenix Suns and Orlando Magic may have traded strong second quarter and third quarter performances last night at Talking Stick Resort Arena, but that only made the game interesting, with Phoenix up 77-75 going into the final stanza. A 21-19 fourth quarter ended up as such because Devin Booker – who only had two points previously in the second half, saved the Suns with back to back three pointers in the waning moments of the game to get the Suns their 15th win of the season.

NEXT GAMES
Hornets at Suns – Sunday
Magic at Kings – Monday

The nice thing about the Utah Jazz right now is their consistency and teamwork. Two years ago, this was Donovan Mitchell’s team, et al. The ‘et al’ has now become a cast of serviceable and interchangeable players who’s individual strengths complement one another and work toward the ultimate goal of proving my dark horse hunch correct – all the while, Mike Conley recovers from his hamstring issue for the stretch run. Utah bested the Hornets last night for their eighth straight win, and after languishing in the sixth spot in the West for the first part of the season, they now own the fourth spot by a half game and .08 percentage points thanks to Jordan Clarkson’s team high performance off the bench and the defense of Rudy Gobert.

NEXT GAMES
Hornets at Suns – Sunday
Jazz at Wizards – Sunday

The Los Angeles Lakers opened November by beating the Dallas Mavericks, 119-110. The Mavericks responded a month later by toppling the Lakers, 114-100, a lone blemish in what would have been an 18 game run that would have kept pace with, even rivaled, Milwaukee’s 18 game run in that same time period. The Lakers have never forgotten that loss to the Mavs, and have taken the last two games to own the season series 3-1 after last night’s 15 point win without Anthony Davis. Last night was L.A.’s seventh straight win after a four game skid.

NEXT GAMES
Lakers at Thunder – Tonight
Sixers at Mavericks – Tonight

The reigning MVP didn’t have to do a whole lot last night in Sacramento – that’s how good, and deep, the Milwaukee Bucks are, as they crowned the Sacramento Kings by 21 points in California’s capital city. Giannis Antetokuonmpo took a night off from being the Bucks’ top scorer (he was their fourth leading scorer with 13, 10 and five) and let his teammates grab the league best 34th win of the 2019-20 season. Milwaukee raced out to a 34-18 first quarter, then put together back to back 37-31 quarters for a 74-62 second half to lope away with the game.

NEXT GAMES
Bucks at Blazers – Tonight
Magic at Kings – Monday

The Warriors’ lineup looked more like a trade bait audition than the Warriors’ conventional lineup if that can even be said and understood in Golden State’s tumultuous season less than a year removed from winning the Western Conference championship and playing in the NBA Finals. That makes it all the more difficult to explain why the Warriors were up 93-83 on the vaunted Los Angeles Clippers going into the fourth quarter last night. Paul George invoked the true meaning of load management by resting a hamstring issue, but Montrezl Harrell hit seven points in the Clippers’ 21-6 run in the fourth and Patrick Beverley was one dime shy of a triple double performance in support of Kawhi Leonard and Lou Williams. The Clippers have now won two in a row and four of their last five.

NEXT GAMES
Warriors at Grizzlies – Sunday
Clippers at Nuggets – Sunda