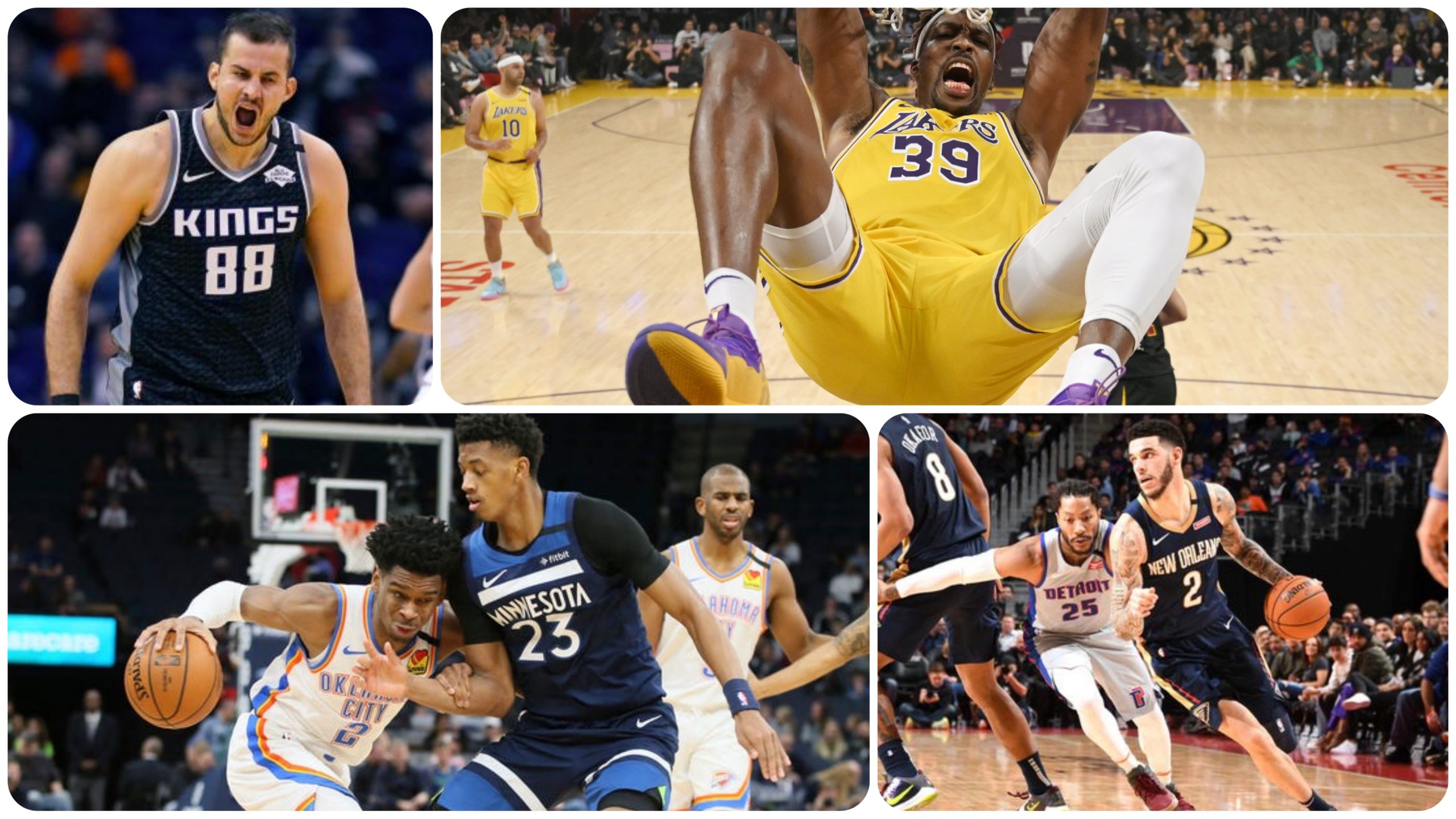 Nemanja Bjelica has a huge night, Shai Gilgeous-Alexander drops a beautiful triple double, Lonzo Ball is resurrected in New Orleans, and we got to see classic Dwight Howard in the Lakers win last night.

The last night of the three night, seven games a night package dropped with New Orleans Pelicans celebrating right alongside the Louisiana State Tigers in wins on Monday evening.

Indiana controlled its own destiny against a conference rival, Shai Gilgeous-Alexander pulled his first triple double but has a long way to go to fill Russell Westbrook’s WhyNot0.3 shoes, and we witnessed the return of an old friend in Dwight Howard.

If you thought Lonzo Ball was a slouch when it comes to playing basketball, you haven’t seen how he’s resurrected himself in New Orleans. Ball scored almost a third of his 17 points in the overtime period to help the New Orleans Pelicans overcome a 16 point deficit and take a victory home to The Big Easy as the Pelicans prepare to face the Utah Jazz on Thursday night in what is expected to be Zion Williamson’s NBA season debut. Former Pelican Christian Wood had a good showing versus his former squad with 18 points and nine rebounds, while Jahlil Okafor came out of nowhere to lead the Pelicans along with Ball and Nicolo Melli.

NEXT GAMES
Pistons at Celtics – Wednesday
Jazz at Pelicans – Thursday

Back on New Years Eve, the Indiana Pacers closed out 2019 by KO’ing the Philadelphia 76ers, 115-97. In 2020, things haven’t changed, though the blow was much softer last night than NYE, as the Pacers pulled out another on against Philadelphia to move past the Sixers in the Eastern Conference standings and take over fifth place with the win.

NEXT GAMES
Nets at Sixers – Wednesday
Pacers at Timberwolves – Wednesdat

The Chicago Bulls have lost seven of their last eight games after last night’s loss to the Boston Celtics. One might question about last night as I have all season – where the heck is Lauri Markkanen? The guy looks like he hit the weight room in the offseason, but his production number suck this year compared to last. His production numbers are down off his career averages after 40 games, and against Boston, he only put up nine points, six rebounds, and two steals in 25 minutes of play, shooting 44.4 percent and nothing from downtown.

Last night was a career night for Oklahoma City’s Shai Gilgeous-Alexander. Not only did he hit career bests in rebounds and assists, but he notched his first career triple double as the Oklahoma City Thunder quieted the howl of the Minnesota Timberwolves with a 13 point road win. The Thunder have won six of their last seven on the road, and 12 of their last 15 games overall.

NEXT GAMES
Raptors at Thunder – Wednesday
Pacers at Timberwolves – Wednesday

The Portland Trailblazers had lost four in a row at the Moda Center in the Rose Garden. That was enough. Time to reset their clocks to Dame Time. Damian Lillard dropped 30 points last night to stop that skid, while C.J. McCollum, Carmelo Anthony, and Anthony Tolliver put their best efforts forward to help vanquish the Charlotte Hornets. Tolliver finished with a season high 16 points, all of them in the fourth quarter to fend off a Hornets team that poured out an impressive 43 points in the third quarter to remain relevant in the game.

The Orlando Magic overcame a Herculean effort by Sacramento’s Nemanja Bjelica last night in Sacramento with a little bit of Casper. Aaron Gordon hit for the three point play with 1.1 seconds left in the game to lift Orlando to its 19th win of the season, after Bjelica dropped 34 points on the Magic, shooting 81.3 percent from the floor and 80 percent from beyond the arc, all for naught. The Magic won despite shooting considerably poorer from the field (ORL 43% to SAC 51%), three point territory (ORL 31% to SAC 38%), and the line (83% to 90%) on the night.

You knew when Anthony Davis went down that Dwight Howard was going to get more minutes. What we didn’t know is that we’d get the old Dwight Howard – as in the Orlando Magic Dwight Howard. LeBron James may have scored 23 of his 31 points in a second half that saw the Los Angeles Lakers drown James’ former Cavaliers with 81 points, but it was nice to see the recently guaranteed Howard put up the numbers he did, shooting 81.8 percent from the field, two of three from the line and hit his only three point attempt. You keep going, DH.

NEXT GAMES
Cavaliers at Clippers – Tonight
Magic at Lakers – Wednesday